This post originally appeared on Bustle.
By Courtney Mina

Body positivity is finally flourishing, thanks in part to the online community of women (and men) who are starting to not only love their bodies, but to show them off with confidence. But what about the women who have big legs? As the size acceptance movement has grown, plus size women with big bellies and thick butts have been proudly selfie-ing it up all over social media, but for women with lipedema like myself, there has yet to be much of an outlet for expression.

I have always had big legs. After I hit puberty, I noticed that my stems began to develop abnormally large. I'm not just talking thick thighs, but properly big calves and ankles as well. Having been around plus size women my whole life, I knew my proportions were uncharacteristically large. What was even odder to me, however, was that no matter what I did, I couldn't get rid of them.

Come high school, I developed an eating disorder (something I've since realized isn't uncommon for most young fat girls who are taught to feel shame and hate about their bodies). I would wake up, skip breakfast, go to school, drink a diet soda at lunchtime with a tiny, homemade, low fat muffin, walk home (which was pretty far), and only eat a small dinner. I ended up going from a size 20/22 to a 14/16 in only a few months, but only from my belly, back, boobs, and face. My legs remained the same size, and after years of shaming myself, I decided to simply accept that this was how I was made.

It wasn't until recently that I discovered the real reason for my abnormally big legs: I have lipedema. Lipedema is a chronic disorder that generally affects the limbs, causing the legs (and sometimes the arms) to accumulate distinct patterns of fatty tissue.

Lipedema is an inherited disorder that mostly affects women and is usually triggered at puberty. The fatty tissue that accumulates isn't something that can be lost with diet or exercise (although that can help treat it, for some). So if you have it, you're kind of stuck with it (unless you have surgery, which can only lessen the tissue, not remove it completely).

Check out those big legs on a teenage-Jedi me.

When it comes to being a plus size woman, it seems pretty common to have a bigger belly or booty. Most plus size women I know have one (or both) of these awesome features, but not every plus size woman has big legs. Sure, the vast majority of us have thick thighs, but when it comes to really big calves and ankles (#cankle pride, baby!), visibility gets rarer. Big legs aren't often showcased and flaunted, but rather hidden under clothing or layers. With that in mind, I embarked upon a little experiment.

I thought it was about time that #biglegs received some positive recognition. Curious as to how people would react to a photo of a plus size woman showing off her big legs, I took to my trusty Instagram (crossed-posted to Tumblr and Facebook too, of course) and posted a full body photo of myself and my big, fat, fluffy thick legs on display. I also opened up about having lipedema, and how the disorder affects the way my legs (and arms!) are built. Posting this photo online caused quite the stir. I was greeted with all sorts of different reactions, which I've categorized accordingly. Let's take a look at them, shall we?

Plus size people everywhere get these guys. They're the ones who usually post the insults ("you're fat," "you're disgusting," "you're a whale," "gross," "laughing emoticon," "ew," etc.) and whose purpose is simply to be as mean and nasty as possible. I definitely got a few of these comment on my photo, but these guys are pretty easy to ignore. 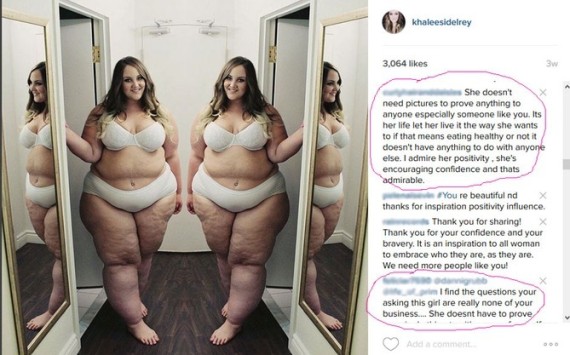 "Concern" trolls are even more common, and I had a ton of these peeps preaching away on my photo. They leave comments like, "You're beautiful but you're so unhealthy, you should diet and work out," or, "I admire your confidence but this is so unhealthy." Perhaps they have a toe in the "mean well" pool, but ultimately they use "concern" to cover up their own judgement and stigma in relation fatness. Here, you can see a few (supportive!) people leaving comments in response to previous "concern troll" comments that appeared on my photo.

Concern trolls have yet to be educated on the notion that you can't actually judge someone's health by what their body looks like (not to mention that your health status does not determine whether or not you get to love your body and be confident about it). I think there's hope for these people, though. They may still "get it" someday. 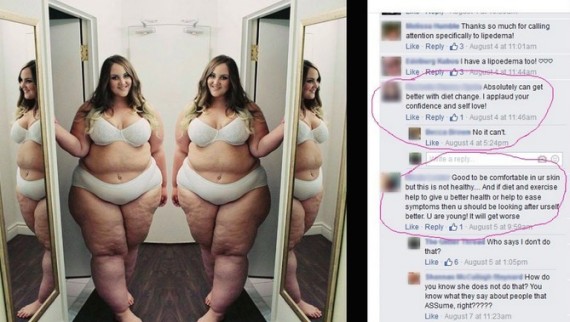 These guys just make me laugh. There were a few people who left comments in regards to my lipedema disorder. You know, thinking they knew more than science and medical professionals. They said things like, "It affects your legs, but not the rest of you," (thanks, Captain Obvious!) and some even had the audacity to say, "You can still lose the weight in your legs," (as if they know more about my body than I do). Yes, argue with science, my good man: You sound mighty bright right now.

The Plus Size Police 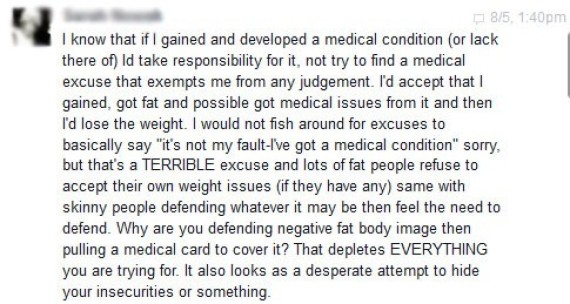 I actually had a fellow plus size woman leave a comment, stating that I "didn't actually have the disorder" and that I "made it up as an excuse for being fat to appease the haters." She went on to add that I was "hurting the body positive movement" by "blaming my weight on a medical disorder." The purpose of my posted photo was to show off my big, natural legs and to talk about a (very legit and real) condition. Everyone's weight comes down to a combination of genetics, diet, and lifestyle choices -- mine included. I'm big for a number of reasons (that I am responsible for, including genuinely loving/being happy being fat), not just because of my lipedema. 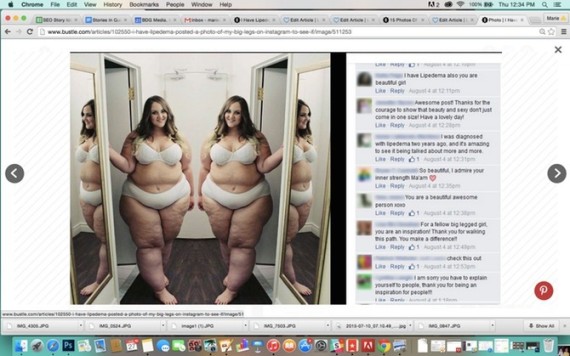 Every rose has its thorns, and although I may have got several prickly comments in response to my photo, I also received hundreds of big, beautiful roses. So many people (of all different genders and sizes) left positive, wonderful, supportive comments on my photo. Some told me I was beautiful just the way I was, while others just wanted to give me some support for doing what I do. There were also several people who happily shared that they, too, have lipedema (or think they may have it) and were so happy to connect with someone who could relate. 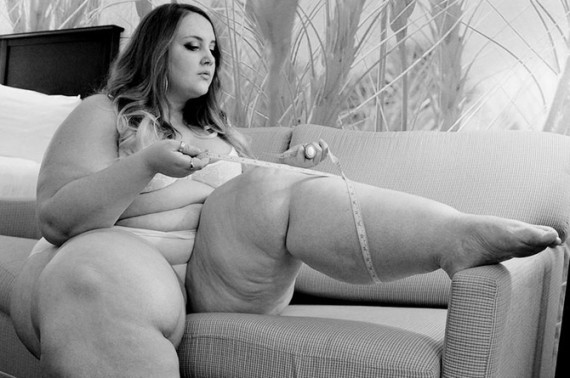 After sitting down with a glass of wine, I did a little pondering and I realized a few things. There will always be trolls and mean humans on the Internet. Fat phobia is still rampant in our society, with people still using the whole "health concern" thing as a way to shame us. Those types love to assume they know more than they actually do, and even though body positivity is arguably at an all-time high right now, there are still many who will try to bring you down the moment they feel threatened or insecure.

The thing is, those people have a lot of evolving to do. They have a lot of education to catch up on when it comes to the intersection of health and size. Your health is your business, though, and you have every right to love your body, feel beautiful, and express your confidence freely no matter your level of health.

It doesn't matter how many negative comments, glances, or snickers you may receive, though. There is always more support, appreciation, love, understanding, and empowerment our there than there is hate. People care, and people will hold you up and support you on your body love journey. When it comes to body positivity, we are all holding up the torch; we just have to keep running with it and never stop. We're eventually going to win this race.

More from Bustle:
On Women's Equality Day, A Very Brief Timeline Of Feminist History In America
9 Pioneering Feminists In History Who Were Way Before Their Time
7 Things To Tell Yourself When You're Having A Panic Attack

I Have A Chronic Health Condition. This Is What Happened When I Put My Body On Instagram.
Meet Our Body Image Heroes