Over the past few months, I realize I have blogged numerous times about dealing with my emotional toddler. As I find myself sitting here yet again blogging about this difficult topic, I wonder whether anything has changed. I have done all I have said over the months to try to allow emotions, acknowledge them and provide comfort from them but in the past few weeks I have been once again frequently supporting my eldest daughter (2.5 years) through some pretty extreme emotions. It has been consuming my thoughts and my life as I have struggled to cope with her regular outbursts.

As usual it has been my youngest daughter, Penny (18 months), who has been on the receiving end of much of Lucy's pent-up anger and frustration and I have had to be constantly mindful, switched on and at-the-ready whenever both girls are up and about (which is for most of the day) to make sure no injuries are suffered. I have blocked physical lash outs, I have coupled this with "I won't let you push," I have acknowledged feelings (boy, have I acknowledged feelings) over and over and over "I can see you're feeling angry/ frustrated/ sad/ disappointed right now. It sounds like you really need to scream. Lets go over here so you can scream as loudly as you need to." I feel like I have been as supportive as any mother can be but still it continues. Then today, a mini-breakthrough...

The girls were playing outside, just off the patio at the water table. I was just inside the door sweeping up the breakfast crumbs whilst keeping my eye firmly on the children, watching for the first sign of tension. It came quite quickly. Lucy was playing with a cup of water and Penny reached past her to grab another cup. Lucy did not want Penny to have the cup and I saw her become frantic in her protection of it such that Penny couldn't get it and she consequentially moved on.

At this point I could have let it go because the girls had actually resolved the issue themselves but I had a gut feeling that Lucy's possessiveness was not about the cup. She was struggling with an inner turmoil and has been for quite sometime. I am slowly beginning to admit to myself -- I have a daughter with intense emotions who needs my help to manage them.

I called out to her "Lucy, you look like you're having a hard time. Do you need a cuddle?" A little, slightly whiny "Yeees!" came the reply. So I put down the broom and held my arms out to her. She came inside and gently came in to my arms. I swept her up and held her until she broke the cuddle by moving her head back. I then whispered softly in her ear. "If you ever feel like you are having trouble staying calm or just having a hard time playing with Penny, you can come to me and ask me for a cuddle. I am here to help you and will give you lots of cuddles; all day if you need to."

She then wriggled out of my arms and blurted out "Sanks Mum," before running back outside to play. As I stood there watching her return to the water table to Penny I had a feeling I had cracked it (at least for today). I continued my cleaning a little less anxious about the interactions of my girls but still thinking about how intensely Lucy reacts to even the most minor of situations.

About five minutes later Lucy called out a whining "Mum, I need a cuddle" and came running back in to me. Again, I picked her up and held her, waiting for her to break the cuddle. But it didn't break -- no, for the first time ever I heard my little girl say something to me that sent the most amazing shiver of goose bumps up my spine. She said "I love you, Mummy" as she snuggled into my neck.

Now, I should say she has actually said this to me before but normally in response to me saying it to her first or as a part of a goodbye phrase -- i.e., "Bye, I love you!" -- which, while sweet, has never really borne the same meaning as having it said to me in context with nothing to remind her to say it and not as part of an habitual greeting.

A little time later she wriggled out of my arms and again stated a merry "Sanks Mum!" before running back to play. Over the course of the morning she came to me for a cuddle four more times and each time she whispered "I love you, Mummy!" before thanking me and skipping back to her play.

It has really confirmed for me that my daughter does not behave the way she behaves because she wants to hurt anyone, she's not crying out for attention, nor is she trying to be manipulative and I'm not even sure she is just being a possessive 'terrible two.' She is simply a 2-year-old who suffers from intense emotions. Not knowing how to safely deal with these feelings causes her to lash out and take it out on the nearest thing (which usually just happens to be Penny). Funnily enough, I think Penny even knows this. She doesn't believe her sister is nasty or conniving or mean. If she did, why would she continue to want to follow her everywhere, do everything with her and play with her all day long? Wouldn't she want to keep away from her? Penny's thoughts on the way she is treated by Lucy are heavily influenced by how my husband and I react to these altercations. If we are overly sympathetic to Penny and apologize for Lucy's behavior or make her feel a victim by sending Lucy away or swooping in and rescuing her, she may just develop such feelings but for now she is happy to accept Lucy and trust that she really does care for her.

I have realized that Lucy is simply crying out for acceptance, for support and for guidance when suffering from these intense feelings. So my first job is to accept; accept Lucy for who she is. The emotions she feels are not because of something we have done or at least, anything we can change. It is in her make up to be highly sensitive and react strongly when things are off track in her mind. I think regardless of her life experiences, she would have always had this trait to work through. So I need to accept this rather than wishing she would be just a little more easy-going all the time.

The next role I have to play is one of support. When I see her suffering from intense feelings, I need to let her know that I am there for her and will always wrap my arms around her to keep her safe. Each time these emotions build up to the point of bursting, I can only imagine how frightened she must feel. That feeling of losing control - What's going to happen? Am I going to hurt someone? Am I going to get in trouble? Who's going to help me? How can I make it stop? It must be incredibly unnerving for a small child to feel so helpless to their own emotions.

And finally I need to be there as a guide. I need to model how to cope when things become frustrating and always stay calm. This means talking aloud through my own frustrations as well as verbalizing how I acted. For example, Lucy screams (turning red from anger in the process) because I have given her the wrong color cup to drink from. I respond with "Boy, that made you really mad when I gave you the red cup. I am using a calm voice to speak to you now. Could you try using a calm voice to let me know which cup you would like?" I am finding that this often diffuses her anger and shows her how to lower the intensity to let me know what she needs. By saying the word calm in my response to her also helps me to keep my own response gentle otherwise I have been known to become quite snappy with her when she speaks to me like this. Furthermore, the more I model a gentle and calm demeanor (especially when being provoked by an outburst) the more likely she is going to follow my lead in the long run.

My daughter has a beautiful soul and one that I must treasure and be grateful for. The intensity of her emotions is something that we are all learning to adjust to. Gradually, little by little I see her start to use some self-developed strategies to manage some of her less intense feelings such as, moving herself away from the situation, stopping to ask if she can use something before taking it from her sister and running to find her security 'bunny' when she's feeling out-of-control. The times when she can't cope herself, this is when parenting really earns that title of the world's toughest job. It is my job (and my husband's) to get her through these difficult stages whilst still supporting her confidence and arming her with a willingness to take on all that life throws at her as she grows. 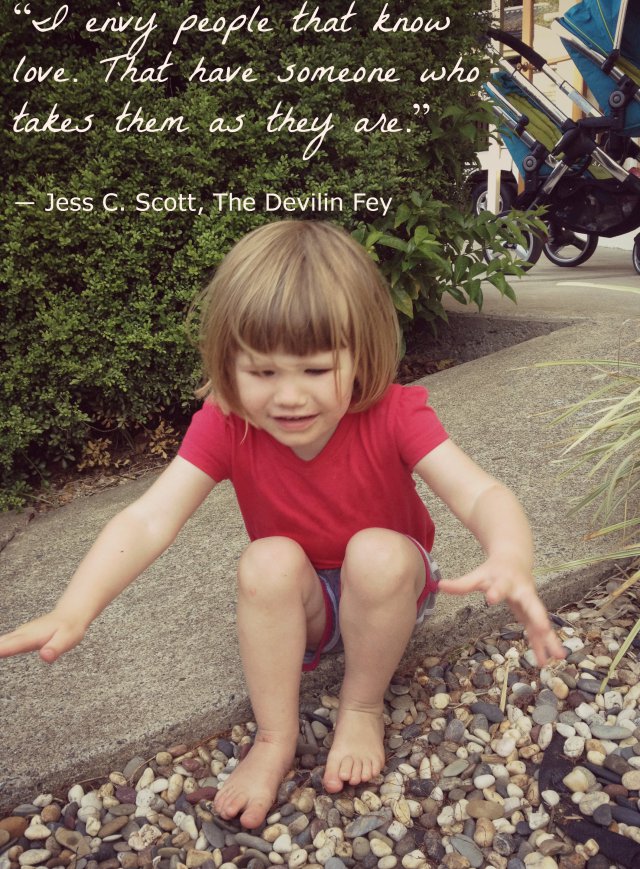 Kate Russell blogs at peacefulparentsconfidentkids.wordpress.com, where this post first appeared.