Growing up, my brothers shared a room and slept in a bunk bed until they were around 10 years old. At night, my father would tuck them into their bunks, and before leaving the room would say repeatedly, "I love YOU the best!" while he pointed at both the brother on the top bunk and the brother on the bottom bunk. I like to imagine that each of those little boys fell asleep in his bunk every night secure in his position as the favorite child. (They did catch on to this trick... eventually.)

My father has admittedly always had a way of creating some friendly competition amongst his children.

Who is the best skiier? Me! Ok, maybe my middle brother.

Who knows the most about pretty much everything? My oldest brother wins this competition hands down.

Who can give the best footrubs? We all fell for this competition way too many times as children.

Who is the favorite child?

The last question is a tricky one. As the youngest child of three, and the only girl, it is tempting to say ME! immediately. But I know as well as my dad that it wouldn't be the whole truth. Undoubtedly, I am sure that I have been the favorite child at various times in my life (e.g., when I got into my dad's alma mater, when I continued going on camping and ski trips with my dad long after my brothers became way too cool, and whenever I said, "I love you Daddy," as apparently only a daughter knows how).

But I'm also smart enough to know that there were moments when my brothers, each in turn, moved into the proverbial first place in my dad's estimation. (I know for a fact I was not the favorite child during my tumultuous teenage years.) I grew up in a house where, for better or worse, the favorite child question was always being asked. And now that I have my own children, I get it. And I must admit, I have a favorite child. 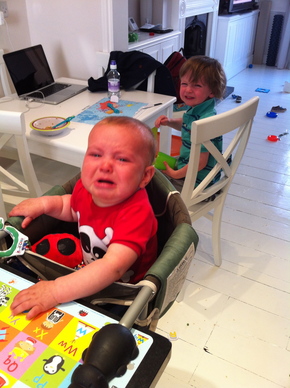 Although sometimes, seriously, neither of them is my favorite...

Yesterday morning when my toddler woke up at 5:30 am screaming for me and resisted all of my efforts to put him back to sleep, he was most definitely NOT my favorite child. As I took him out of his crib to trudge to the kitchen and put on a pot of coffee, I looked over adoringly at my older son (who slept soundly until 7:45 a.m.) and thought, ohhh hello there, favorite child.

Later that morning, my older son (not one hour earlier, my "favorite" child), in a fit of crazy preschool morning fervour, climbed across the kitchen counter and accidentally knocked a bottle of red wine onto the floor. An hour later, I was still furiously cleaning red wine and small shards of glass off of my white floorboards. All this happened while the baby sat quietly eating his Cheerios. Oh hello younger son, turns out I was wrong before -- you're actually my favorite child!

Fast-forward several hours later, and I had made the wise decision to grocery shop with both of my children after camp pick up. My younger son (who had not napped yet) began running around like a lunatic and pulling everything off of the shelves, nearly breaking a jar of olives, and finished off his exemplary behavior with a cash register incident that involved a lot of screaming the word "CANDY!" over and over. In the meantime, my older son stood quietly by my side helping pick up the remnants of the tornado of toddler frenzy that blew through the store. My older son was officially back in first place.

That is, until bath time last night, when my older son thought it would be a really great idea in the midst of a temper tantrum to throw a cup of water at me because I had the audacity to wash out the paint he got in his hair at camp. Decidedly NOT the favorite child.

And then something wonderful happened last night, as it does almost every night. The boys were clean and in their PJs, and we laid down and snuggled up with each other to read some books. My older son pointed out words he recognized, and my younger son pointed out pictures he recognized. And I thought to myself YOU are my favorite child as I snuggled them both under each arm. And that is the closest thing to the truth all day.

So yes, I do have a favorite child. It switches daily, hourly and sometimes by the minute. But my favorite moments are the ones where I really can't decide, and it is my lifelong wish for each of my kids to go to bed each night feeling like he is the favorite. Maybe my dad was on to something...