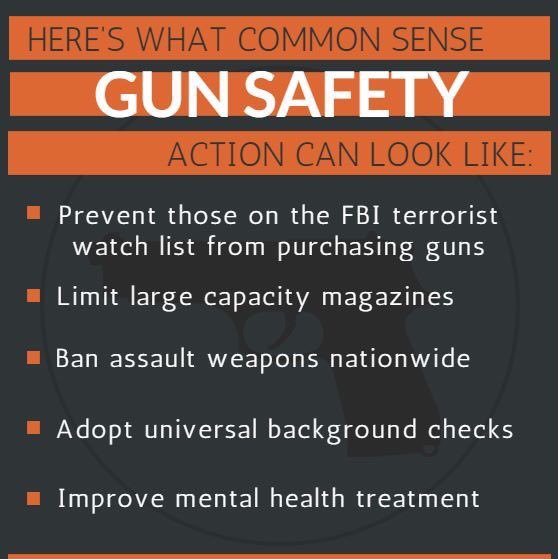 If you have a soul, you've been absolutely gutted by the massacre that took place in Orlando, at Pulse nightclub.

If you're like me, you're feeling frustrated, angry, depressed and sad; sick of guns, sick of violence and fear; sick of thoughts and prayers, sick of moments of silence; sick of endless lists of names and #hashtags and changing your profile picture to match the color or symbol of the latest mass killing.

I was wallowing a bit this morning in the depths of our national despair, wondering what on earth it is that we're doing wrong in this country. Wallowing and wondering how it's possible can we have so many mass shootings with no corresponding gun reform? It defies logic.

In attempt to turn this wallowing around, I started making mental lists of what we have going for us on the "plus" side in our fight for gun sense legislation. And guess what? That "plus" list is longer than the "minus" list.

Within the time it took me to complete one summer carpool run, I completely turned my mindset around. Here's what I came up with, see if it works for you:

We have a voice; they have only grunts and the last gasps of anguish as they face an ever-changing world. Our voice speaks of peace, poetry and it sings songs of love. Their grunts and groans are the sounds of single-cell organisms filled with fear and hate. Our voices will drown their prehistoric moans out, easily.

We have facts, research and logic; they have only knee-jerk, emotional, primitive reactions. We love reason; it's a beautiful thing to use one's brain to figure out peaceful solutions. They have only angry impulses they are seemingly unable to control.

We have experienced, educated leaders; those that oppose any type of gun sense legislation are hiding behind the bloviating, former reality TV host turned oozing, parasitic, barely-sentient, guinea worm. The fact that they chose him to be the face of their fear-based movement says pretty much all that needs to be said about that. Our political leaders calling for common sense gun legislation use calm, rational dialogue to problem solve; their political leaders use slander, lies and ugliness. In the playground version of this reality, they are they insecure, truant bullies picking on the honor students.

We have history on our side; they have the embarrassment of being walking, talking Confederate Flags, kicking and screaming as they are lowered from the flag pole in response to a war that ended over a century ago. Our children and our children's children will not believe this was a battle we actually had to wage, that there was actually resistance to this peaceful and sensible movement. We are on the right side of history; they are all those who have never learned from history and are doomed to repeat it.

We have every reasonable world leader and nation, every reasonable religious leader and philosophical school of thought on the side of peace, justice and nonviolence; they have...the NRA. The NRA is a soulless, bloodsucking propaganda machine of fear-mongering made up of itty-bitty, gutless sewer rats, exploiting innocent lives for money.

We will affect change. New legislation will be drawn up. Laws will be passed. We will win. We just have to hang in there, keep use our voices to speak up and never, ever give up.

We can do this.