Last night, most of you basketball fans out there probably tuned into the Cavs/Lakers showdown to try and decide, once and for all, whether LeBron James or Kobe Bryant is the current king of the NBA. 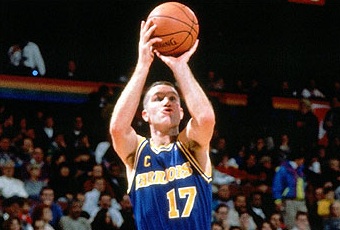 Not me. While you were "bugging out" over the undisciplined streetball, I was watching old Indiana Hoosiers clips from the days when basketball was basketball.

There's a reason James Naismith didn't cut a hole in the bottom of the peach buckets when he created the glorious game. He wanted to keep things slow and orderly, the way the game is meant to be played. You know what's nowhere to be found in Dr. Naismith's original 13 rules? A note about how a simple layup off the backboard can be improved by 360-degree-basketball-dunking.

Which is why I was happy to learn that my prayers to the Basketball Gods (Adolph Rupp, George Mikan, Luther Gulick) have been answered by Georgia wrestling promoter Don "Moose" Lewis, founder of the All-American Basketball Alliance.

What makes this league All-American? Well, no foreigners, for one. Fine by me. The razzle-dazzle-over-a-refined-game of "playahs" born outside of these United States, like Tim Duncan, have ruined basketball. 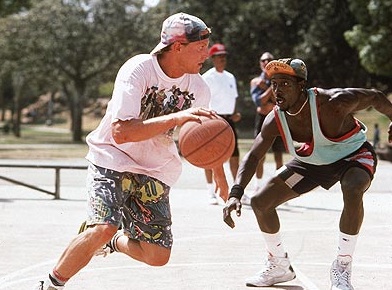 Eliminating foreigners is easy though, a common sense step that any fan of a well-executed three-man-weave can appreciated. It's Moose's bolder backward-thinking initiative that has me lovin' it!

"People of white, American-born citizens are in the minority now. Here's a league for white players to play fundamental basketball, which they like...Would you want to go to the game and worry about a player flipping you off or attacking you in the stands or grabbing their crotch? That's the culture today, and in a free country we should have the right to move ourselves in a better direction," Don "Moose" Lewis

In the words of fellow white man Marv Albert, YES!

No before all you knee-jerk liberal sportswriters get your Twitters in a bundle (I'm looking at you Charlie P. Pierce), know that this has nothing to do with race. Blacks already have the NBA, which is the big "blingy" one, so how can a smaller targeted league for whites be racist? Lewis isn't saying the NBA needs a Caucasian quota, or some type of white guy affirmative action program, that's the attitude of those who would rather preen than hustle for an offensive rebound.

I feel confident speaking for Moose --Can I call you Moose?-- when I say: We don't look to the government, or David Stern, to solve our problems. We're simply creating a new league that doesn't include the "street-ball" played by "people of color." (Besides, AABA refs are going to be sticklers on traveling and palming, so what Blackrifican-American would even want to join! Am I right? Somebody give me a firm handshake!) We're carving out a space four ourselves to play the game the right way.

When I say "we," I am including myself. I want to be part of your pioneering effort to rid the game of basketball of style. You sir, are the Red Auerbach of white people who've been denied basketball opportunities because of the lack of color in their skin, and I support your initiative every Earthbound step of the way.

That is why I am humbly submitting my C.V. to proudly be the first member, the Nat "Sweetwater" Clifton if you will, of the AABA. I will withstand the racial taunts, the bleeding heart blogosphere, and my own inability to reach the net, to remind people that basketball was a game invented by white people for white people.

Here then, are #17 reasons why you should consider me when the AABA gets off the ground. Metaphorically, of course. 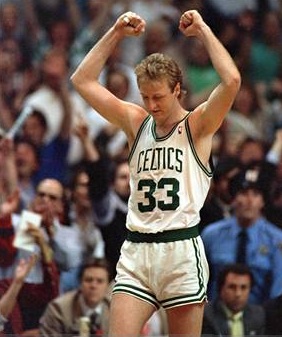 Why #17, you ask? Because that was the jersey number of the palest white superstar to ever play in the NBA, a man with an old-fashioned G.I. Joe haircut that as Abe Simpson says, "you can set your watch to."

#1. I Am White. Really Really Really White: My ancestry is Germanic and Celtic, so while wearing shorts, my skin burns red through my knee-high colored socks. I live for floor burns, just to get some color.

#2. I Play Basketball Twice A Week: You may not know it to look at me, but I play a lot of hoops with other white men. (And not to engage in Derek Fisher-esque braggadocio, but I am well-regarded for my ability to break down into the triple-threat position.) Although I do have to come clean, Moose. I live in New York City, so many of said white men are Jews. I hope this does not affect my candidacy.

#3. Larry Bird is Too Black For My Tastes: Sure, many fans consider the Bird-era as the highpoint of white might, but I think they are ignoring the truth. This so-called "Larry Legend" used to shoot left-handed when he got bored during games. That kind of selfish improvisation has no place in the AABA. He also ignored his daughter for 17 years, remains close friends with Magic Johnson, used profanity on the court, and had unruly hair. Bird seems blackish to me. The true "great white hope" was obviously...Mark Eaton.

#4. I Think Tim Duncan is the Epitome of the Tattooed Gangsta NBA: Go ahead and try to hide that jester on your back shoulder, Mr. Duncan. Can't fool me. In my book, you're Allen Iverson.

#5. I Believe With All of My Heart That Europe Ballers Are Depraved Godless Sodomites: This should go without saying, but not in the anything-goes NBA. In 2007, they gave the NBA Finals MVP award to a Frenchman. 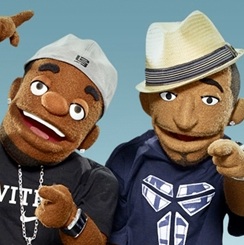 #6. I Feel The Kobe/LeBron Puppets Are the Mark of the Devil: What ever happened to the puppets from the good old days like Howdy Doody and King Friday? Those puppets didn't "jive talk" while showing off their earrings and Nike gangbanger sneakers.

#7. I Believe if the NBA Had More Curt Schillings, We Wouldn't Need The AABA: Different sport, I know. But Moose, when I saw Curt's bloody sock, I didn't see a white warrior. I saw a man dying for our sins. After the miracle he pulled in Massachusetts, I am no Doubting Thomas. Schilling is exactly the type of proud white man we need to give the AABA cul-de-sac credibility. Need be, I will recruit him to be the AABA's deputy commissioner. Can't hurt, he's got the Lord on his side.

#8. I Am So Offended by "Prison Pants" That I Wear Overalls to Church: You bet your old white Southern patootie that I'm listening to Brett Favre's new song "Pants on the Ground." I think the AABA should play it right after the national anthem. 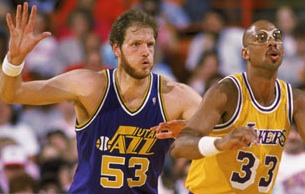 #9. I Have Proof That Steve Nash is One of "Them": Excuse me, but Steve Nash is not fit for the AABA. We all know he's Canadian, but did you know he's also married to a Paraguayan and enjoys soccer? Don't kid yourself; he's Hugo Chavez.

#10.: I Am the Only One Willing to Speak the Truth About Michael Jordan: He Was Nothing Without Will Perdue and Jud Buechler.

#11. I Stopped Watching the Masters in 1997: Yo Tiger, you know the reason there are still courses you can't play? Because the cart girl is some rich white executive's daughter.

#12. My Favorite Basketball Play to Watch is a Perfectly Executed Underhand Free Throw: I think AABA players who shoot less than 85% should have to run gassers after the game. Maybe it's not a "hip-hopping" as a three-pointer, but there's a reason it's called a "free" throw, hot-doggers.

#13. I Wear John Stockon Shorts to Bed: Hey kids, you know how you become the all-time leader in steals and assists? By wearing shorts that keep your business in check so you're focused on basketball, and not what's flopping around down there for all the groupies to see.

#15. I WILL Take A Charge in a Pickup Game: The rule clearly states, "A defensive player is permitted to establish a legal guarding position in the path of a dribbler regardless of his speed and distance." This isn't fun-and-games out here. You're invading my territory.

#16. My Favorite Years in College Basketball Were 1967-76: That was the golden age when dunking was outlawed. It was a glorious time, Moose. I think the AABA should adopt the same rule, whether or not it'll be necessary. 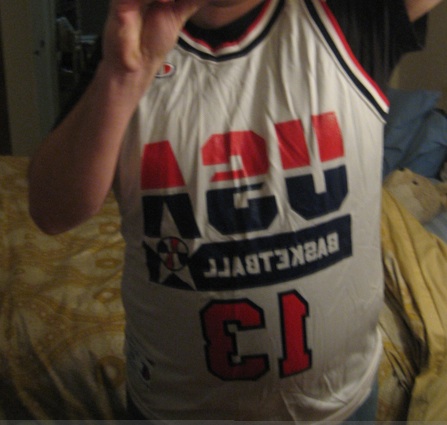 #18. I Don't Care if White Men Can't Jump: But I do care if they act like fools. Turn your hat around and get back on defense, Billy Hoyle. You're an embarrassment to your pigmentation.

You see what I did there, Moose. I gave you one extra reason that I should be in your fledgling league. That's what us scrappy white guys do, give 110%.

Meanwhile, I'll be down at the gym, diving for loose balls.