Like any good New Yorker, I would rather get punched in the face by my best friend than be forced to look at my monthly bank statement.

It's not that I'm some sort of reckless spender who blows money on ridiculous things like cab rides or vegetables. I just have one indefensible and enormously bad habit and I have a hard time admitting it even to myself: I rack up ATM fees like a complete moron.

It wasn't always this way. When I first arrived in New York, about three and a half years ago, I came with an extremely finite amount of savings and a notebook in which I jotted down every single dollar I spent -- on groceries, coffee, metrocards, everything. If I spent more than $20 in a single day, I marked it and reminded myself to spend less than $20 the next day. I wasn't exactly broke, but I was unemployed and really, really careful. 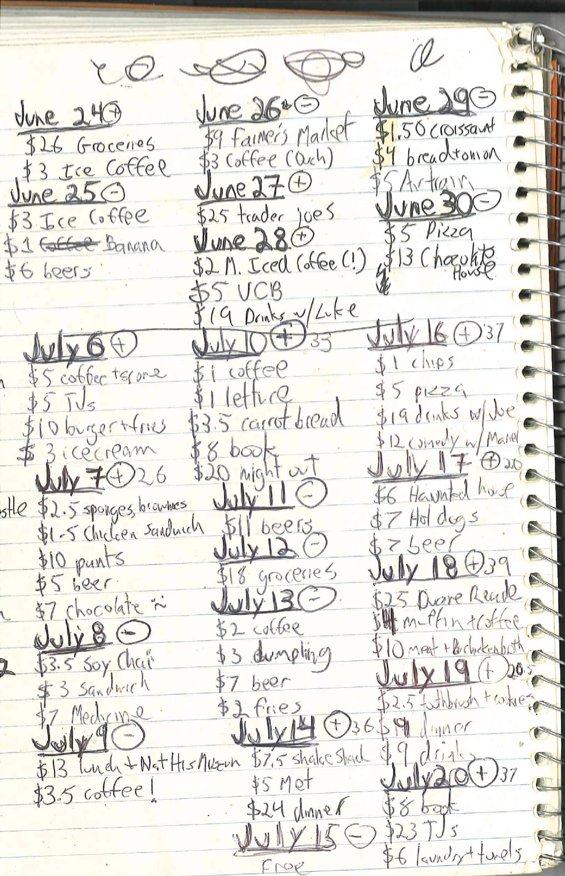 A photo of the notebook that helped me survive New York City.

Somewhere along the way, that changed. I found a job that earned me enough money to go out for some beers after work with friends. I stopped using the notebook. And I began the slow transition from thinking about money all the time to trying as hard as I could not to.

As you'd expect, bad habits formed quickly. I stopped asking for "the shittiest beer on tap" and started ordering IPAs. I rented a room in Brooklyn that cost more than I could afford. I bought a winter coat from the Gap (for 60 percent off, but still).

I felt dirty, like I had betrayed a past self who had worked so diligently to keep me in this city for at least a couple more months. But I also felt good. After all, I had been able to get high on some high-calorie, high-fructose item of questionable nutritional value.

At first I wasn't withdrawing from bodega ATMs every time. While there was no Bank of America anywhere near my apartment, there was one right underneath my Manhattan office that I went to diligently and often. The costly bodega ATM transactions back then could be justified as a series of isolated incidents: A desperate moment inside a cash-only bar, a need to split a check in a socially-acceptable way, money I wanted to pay back to a friend immediately.

But slowly and surely, I started using bodega ATMs more and more. Sometimes twice in two days. Once three times in three days during what can only be described as an ATM bender. I can't remember the exact day I knew I had developed a problem, but it probably involved a late-night craving for Dunkin Stix.

Still, I didn't want to own up to it. I kept it secret from others. And I lied when the topic of withdrawals came up, saying that I still regularly went to Bank of America when I needed cash, which is weird because who even has conversations about ATM withdrawal habits?

Then one recent day, I decided to own up to my problem and see just how much money I was throwing away. And there it was: $26 between Jan. 1 and Feb. 1 on ATM fees -- and it might have been a low month, I was out of the country for two weeks and spending less in a post-holiday hangover.

That might not sound like a lot, but it's hundreds of dollars every year I'm not saving. And if I can't kick the habit, thousands and thousands over the course of my life. So why don't I simply move my money to one (of many) places that not only doesn't charge fees but pays the fees incurred at the ATM?

The (sort of) problem is, I'm fortunate enough to be in a place where $26 a month isn't going to render me broke. And it's just small enough that ATM fees can be ignored without serious consequence. It's right around the amount banks know they can charge without major repercussions.

Since I have difficulty expressing my relationship with ATM fees using words, I'll express them in hand-drawn chart form. Here is why I haven't changed banks: 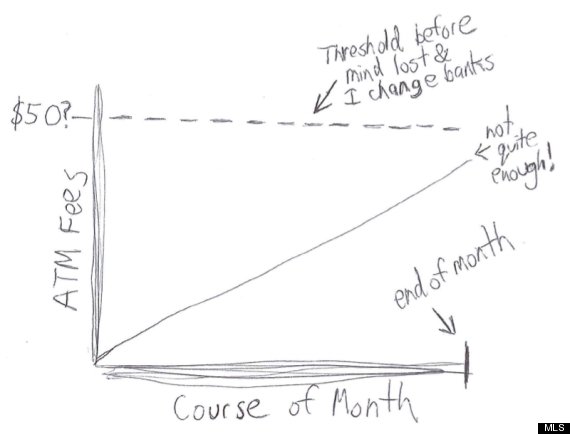 They say the first step is admitting you have a problem. I guess I'm doing that. Now, I need to go get some cash.