So, who really killed the electric car? Sadly, I think I did. Here's why:

Rick Wagoner was interviewed the other day and said - "The future of GM and the American Automotive Industry is in electric cars". The ABC News report mentioned something about a failed prior attempt called the EV1.

Well, as much as Rick may being honest about his hopes of saving GM - the 100 year old automaker has had more than a few years of a head start to pay attention.

The year was 1979. And I was looking to buy my first car, a senior in high school.

And here's my subscription to Electric Vehicle News (EVN). 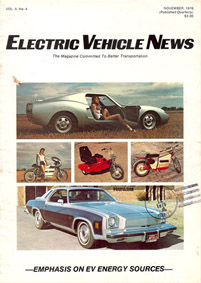 First, did you know there was a magazine called EVN almost 30 years ago?

Second, long before Al Gore made the conversation about the climate crisis a dinner table conversation - why was a high school kid able to figure out that replacing gas with electric was a good idea?

And what happened in the intervening 30 years to stall, obscure, and some would say torpedo the innovation that should have allowed the the EV industry to flourish.

While the film hints at some dark conspiracy - and there's certainly some reason to believe that a company with a huge infrastructure and that has a sunk cost in the combustion engine doesn't benefit from a shift to radically new technology - the question remains: Who killed the electric car? And, can we really expect significant innovation now - and fast enough - to make a real change in both the economy and the ecology around the automobile industry?

Think for a moment about what the world would be like if EV News was a must read for every automotive executive back in 1979, rather than high school students and hobbyists. What would battery technology look like today if GM had put their huge R&D efforts behind electric storage and delivery? But that didn't happen. Looking to quash innovation and stall new technology, GM bought themselves 30 years of healthy gas burning profits. And here we are today.

So, I don't own an electric car. I own an SUV. And six months ago, my family and I decided it was time to get rid of it. So we went searching for a hybrid. My first stop on the shopping trip was GM. I wanted to drive the Ford Escape. But, in New York City, and in one of the largest company-owned showrooms in the nation, I was told that they didn't have any, didn't expect any, and that I could maybe drive a one-year-old white (used) hybrid with 'low miles.' My family and I got as far as sitting in it. It had a plastic interior. It was cheap and ugly. We were told the vehicles they had were built to be converted into taxi cabs. We passed.

We tried Honda. We drove a Prius. We liked Toyota a bunch, but they had a super-long waiting list and frankly the gas mileage wasn't any better than I remember my Dad getting with our red Volkswagen hatchback back in 1974.

In the end - it was a tipping point for my family and me. We're getting rid of our car. For good. We'll bike. We'll ride the subway. We'll rent when we need to take long trips. But we're removing ourselves from the automotive owners club. It's hard, frankly. It will limit some things we can do. It will fundamentally change the way we live. And we're ready for that.

So when Rick Wagoner stands and confidently predicts that the Volt will save GM - I think it's time to sell your GM stock. GM had a 30 years head start to see the future, and evolve the company to meet it. They waited too long, and now it's too late. Some feisty entrepreneurs may build a great new electric car.

here's the Reva, the MiEV, and the Zapp

So why do I think I killed the electric car? Because, back in 1979 I got it. I knew what I needed to do. I was 17 years old, and there was no talk of Global Warming. It just made sense, cars were going to hurt the planet. And I wanted to buy one that didn't burn fossil fuel. I ignored my EVN subscription and my gut. Years later I could have invested in a company that was building them (or investigating battery technology). I could have bought stock. I could have made a film. I could have gone 'car free' when I moved to a city with great public transportation more than 10 years ago. I didn't do any of those things. Sure, big companies are going to hold their ground and stifle innovation - we know that.

But entrepreneurs, investors, venture capitalists we can turn the tide. We can embrace bold new ideas. We can buy new products and rally early adopters. Sure the Tesla Roadster is neat, but come on - guys - that's not what's going to change the world. When I see Jason Calcanis blogging about his Telsa, well frankly, that's really not going to help the environment a bit. Now, if Jason were excited about a SMART car, or the Tata - then thought leaders will be really leading.

So, today - I took the first step. I got rid of my gas guzzling SUV. Sold. Gone forever. And I'm not replacing it. So I may have killed the electric car, but I'm not going to buy one of GM's Volt either. I would have, but now I'm passed the tipping point, and I'm not going back.

Instead, I bought a bike.

Here's a page from EVN, 1977. Take a look at what they were thinking back then. 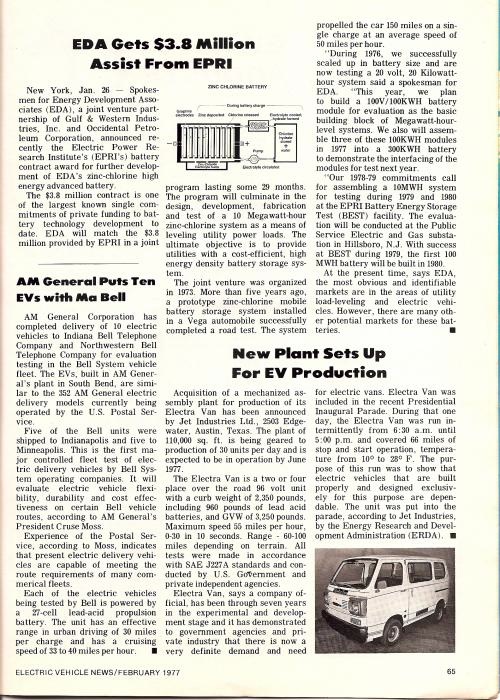