It may not surprise you to hear that I have very little experience negotiating international policy. While this wouldn't have held me back from a prominent advisor position in the Bush years, I am afraid that it disqualifies me from stepping up to the plate in the current administration. But I have stumbled on a unique rarely mentioned negotiation strategy that I feel compelled to share . After reading one despairing editorial after another about what, if anything, can be done about Kim Jong Il, it occurs to me that there is one sure fire path that is not being exploited

It is an insight I have acquired because I may be the only person in these United States who read both his book on opera and his book on cinema. Also because I also know a lot about interacting with pathological narcissists. I was raised by them and have long lived among them as I continue to study them in...well, relative peace. In a way, I am to narcissists what Jane Goodall is to chimpanzees. (Except I guess Jane Goodall wasn't actually raised by chimpanzees.)

First you have to understand that it is the grandiosity of Mr. Kim's narcissistic disorder out of which his unyielding nuclear testing stance is born.
A friend of mine once explained the credo of the narcissist as "I'm the piece of shit the world revolves around." It is a psychological syndrome in which extreme insecurity finds cover and comfort in self obsession. A narcissist operates out of only two constantly flip-flopping states of emotional being; grandiosity and humiliation. So, if you are not feeding the grandiosity of someone like Kim Jong Il, than you are humiliating him. Period. Those are your choices. That is the part of this equation you can't change.
Out of those two choices, only the grandiose narcissist is a happy narcissist. A humiliated narcissist is a rigid, non-compliant, revenge seeking nightmare. And Kim Jong Il is desperately interested in renewing his grandiosity now that the world sees his recent health decline as the main topic of discussion when his name comes up. To a narcissist, let alone one who is a head of state, the idea that he is ever in any kind of a decline is not only unacceptable, it is humiliating. And the behavior of a humiliated narcissist is always a vengeful, vindictive tantrum. Always.

Of course knowing this leaves you with only a limited amount of moves to make.
That's where my brilliant plan comes in to the picture. Because Kim Jong Il is a wine-women-and-song-style hedonist, not an Islamic Jihadist joie-de-mort death worshiper, I think that he doesn't want to die. He wants to live really really well. He wants more than anything to bask in a spotlight of admiration and praise. His former sushi-chef-turned-author revealed that Dear Leader not only has a wine cellar containing 10,000 bottles but also used to send him on culinary shopping trips to Iran and Uzbekistan for caviar, to Denmark for pork, to China for grapes and to Thailand for mangos. That's a lot of energy to put in to a mango.

Now we consult his official biography which tell us that "He wrote six operas all of which are better then any in the history of music," Add this to the fact that he wrote an entire book about opera. 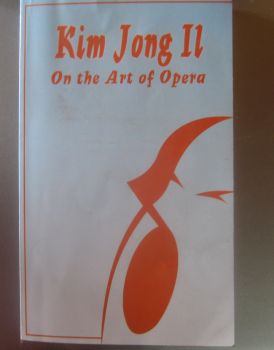 Before Kim-J became the ruler of his country, he had such high intentions for his artistic career that in 1978 he kidnapped a famous S. Korean actress and her director husband and forced them to work in the N. Korean film industry. Apparently he held them captive, while also paying them handsomely; Kim-J's version of a development deal. (And in reality not so different from those common in present day Hollywood. Except that the big Hollywood studios do not officially confiscate your passport. Or at least they let me keep mine. I don't know about Judd Apatow.)
When the actress Choi en Hui that Kim-J kidnapped finally escaped, she characterized him as a "micro-manager." Herein, I believe, lies our sure fire solution.

Why can't the Dept. of Homeland Security team up with a bunch of the big National Opera Companies and give Kim-J and his six operas an on-going venue? Its a lot of work to mount and opera and keep it running. Just River of Bloodalone probably requires a convincing river.If each of those operas begins touring on a constant national (and international) basis, not only will Kim's grandiosity be at an all time high, but he will be too preoccupied trying to placate cast members and extras while also negotiating with stage hands, set designers and union flunkies.There will be a constant amount of press appearances , morning shows, personal appearances and requests for lectures that will feed his grandiosity and take his focus off of nuclear weapons. More than likely he will have no inclination to bomb any place where one of his operas is packing them in. The desire to feed his glorious legacy as the only Head of State Opera legend hyphenate will be all that he thinks about.

This is provided, of course, that his reviews are good. And with world peace hinging not on summit meetings but on good reviews, I am afraid the Obama administration is going to have to expand the reach of government yet again . Perhaps The Department of Homeland Security can begin a new division: The Office of Government Subsidized Critics. I know this is a gray area in term of the first amendment. Conservatives and liberals like will be screaming about it so it will have to be carefully legislated. But when you take in to account all the trouble currently being experienced by newspapers and the print world in general, this could prove to be a nice way to help out unemployed journalists.
From that point on, it would be the civic duty of every patriotic peace loving American to spend one evening every few months attending one of Kim Jong Il's operas. Who among you would not rush out immediately to buy tickets to Tell O Forest if you thought it would insure world peace? And River of Blood can't be that much harder to sit through than Mamma Mia. Plus, the current Korean regime has a certain genius for pageantry. Maybe if Song of Mt. Kumgang or A True Daughter of the Party drags in a few places, thousands of Korean grade school children could be persuaded to do one of those amazing synchronized flash card routines. Talk about an all ages crowd pleaser for even those who hate opera.

Once that endless touring company is established, all that will be required in terms of maintenance will be for the big studios to take turns giving Kim J's operas movie deals . While he lives day to day on the perpetual hope that his work will get made in to blockbusters, (like the entire city of Los Angeles), it will not only also present the United States with the best possible bargaining chip for all future negotiations but feed his grandiosity as well. Currently we are asking him to get out of the nuke race "just because we said so". But once my plan is enacted it will be only a matter of the endless dangling of carrots in the form of back end, points, merchandising rights, etc....
And if he gets testy, all he will need to hear is that "Zac Efron is very excited about the role of Ping Li, the coal merchant. All he feels it needs is a little punch up and a quick polish," At that point we will be asserting the first really effective leverage we have ever had over N. Korea.