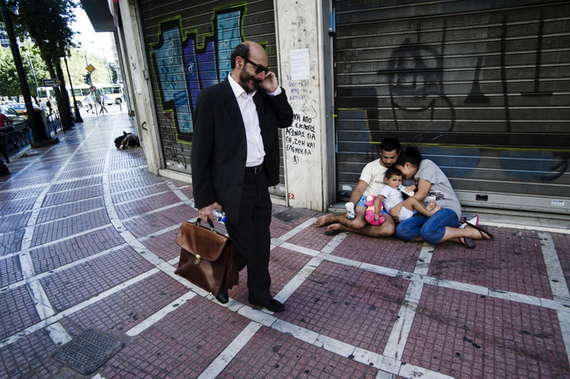 I live in Greece.

I live in the country which, as you've heard said countless times, gave birth to democracy, theater, the sciences, the arts and whatever else defines the culture of Western civilization.

I live in the country that is the cradle of Western civilization. The country that has also loaned thousands of words to other languages because the meanings of these words were first defined by the human species in this country thousands of years ago. By my ancestors. These words, these meanings, which are priceless and which we lent to world, to the human race, without seeking anything in exchange.

I live in the country of Socrates, Plato and Alexander the Great.

I live in a country governed for decades by corrupt politicians, petty and unseemly people whose moral compass is self-interested and were elected democratically by petty and unseemly me. Self-interest. The vested interests of those who will cover for them. Their bosses are organizations, corporations, sovereign states. Unfortunately, their compass was never my country's interest.

I live in a country that has the highest unemployment rate in the world, the highest paycheck deductions, the most expensive gasoline... and the list goes on.

I live in a country that belongs to a continent with a Greek name. It's the name of the daughter of the Phoenician king and Telephassa who was abducted by Zeus and bore him three children.

I live in a country that doesn't belong on this continent. A continent where the current definition of the word human and the meaning of humanity do not express me.

I live in a country that is lapped by a beautiful sea. In this spectacular part of the world with thousands of breathtaking islands, shimmering sun and welcoming sea. In the sea in which over 1,500 people have drowned this year while trying to escape their fate of being born in a miserable land only to meet their end in a cemetery of souls known as the Mediterranean Sea.

I live in this country and in a daze watch a cold-blooded murder as everything happening was and is predictable. Other nations' will and mobilization could've prevented it. But no. Some people, from the comfort of their living room sofa or sitting at their desk, express their concerns about how this could've been resolved. They're the same ones who don't want to fling off their jacket to dive into the sea in a bid to save even one human soul. They're the same ones who sit at their keyboards typing equations and figures into the computer to press for the payment of my country's debts to the IMF instead of pensions because the figures don't add up for the payment of both.

I live in the country where some people may not receive their pensions in the months ahead. Pensions... money... for food... for medicine.

I live in the country where people are becoming insane. Where people are losing their minds. I live in the country where a few days ago a father chopped up his 4-year-old daughter, cooked the pieces with potatoes and rice, then fed it to the dogs. The neighbors feared this little angel was being abused but didn't speak out of fear. Out of fear of becoming involved. The police station was thirty meters away...

I live in the country where the Minister of Justice said he didn't think this beast had too long left to live and that he would be killed in jail.

I live in the country where everyone awaits real justice be meted out from those whom the justice system put behind prison bars. And, of course, all those harboring this hope oppose the death penalty.

I live in this country and I love living in it. Because it brings me face to face with human's darker side and I see what monsters we can become given the circumstances.

I live in the country where half of the prostitutes are Greek women. If their number was smaller or was zero, all may have been well in this country and I might not be writing this article.

I live in this country and now that summer is approaching, you will come to enjoy the pleasures it has to offer.

The sun and the sea.

The dazzling afternoons and the smooth nights.

The wine and the ouzo.

The souvlaki with tzatziki and the moussaka.

The dancing and the feasts.

Our hospitality and perhaps even a summer romance.

And most of all, our smile.

Just keep one thing in mind...

I live in the country where there's a lot hidden behind this smile.