Name: Andrew Salvaterra
Age: 27
Height: 5'9"
Before Weight: 270 pounds at the start of my weight loss, but almost certainly higher before that

How I Gained It: Almost all of my adult life I have been out of shape. I was fully aware of this, and yet refused to do anything about it based on my fantasy that I could keep making the same poor lifestyle decisions (namely eating fast food constantly and not exercising), and magically one day I would just start to lose weight.

Breaking Point: In January 2011, my wife and I welcomed our daughter Giavanna into the world. It was at this moment that I realized that to be a good father to her, I needed to become the best version of myself that I possibly could be.

How I Lost It: As someone who had actively stayed away from working out and eating healthy, I had no idea where to start and felt completely overwhelmed by the task that lay in front of me.

Fortunately, in March of that year, a group of co-workers organized an office-wide "Biggest Loser" style competition. At first, my routine began with trying to cut down to eating fast food once a week, packing my own lunches with calorie counts taken into consideration and finding time at least twice a week to take walks. I now bring low-sodium soups or low-calorie frozen meals for lunch. I've switched from chips and soda to granola bars and water. Another aspect is dealing with "food days" around the office. This was a major pitfall to my health, and has been something that I have been able to limit through portion control and better decision making.

Over the course of the three-month competition I managed to lose 50 pounds and win the contest. In the past year and a half, I have taken my weight loss total to 120 pounds. This original routine has evolved to removing fast food almost completely from my diet, playing with my daughter every opportunity I have and joining a gym. I usually make it to the gym twice a week. Currently, I like to spend an hour on various weight machines and free weights focusing on legs and lower body one day and arms and upper body the other day. After that, I will use a stationary bike for three to five miles, and I finish with running on the treadmill for three to four miles. Also, outside of the gym I try to find time at least once a week for a "workout" that is actually fun, like playing pickup basketball or soccer.

My weight loss will be a lifelong commitment but a major milestone was reached recently when I signed up for my first 5K run. To this point in my life I had -- by choice -- run exactly 0K. Much to my surprise, I not only completed the race, but finished in 24:33, good enough for 34th place out of over 200 runners.

I wake up in the morning with more energy and happiness than I have ever had in my life. For anyone who says it isn't possible, it can be done with determination, sweat and a reason to keep pushing. 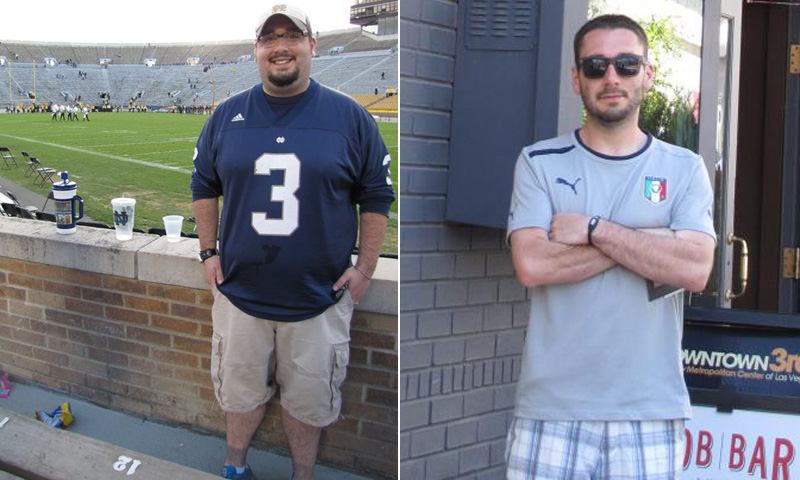