How I Gained It: Growing up I had enormous self-esteem issues. Most people that knew me in grade school would never believe that, but I hid it well. I was always chubby. My pediatrician put me on skim milk at 6 months old because I was gaining so much weight. We didn't know much about proper nutrition back in the 1970s. My parents did their best, but my weight yo-yoed my entire childhood. I did lose about 50 pounds my senior year of high school, but not in a good way. I ate almost nothing, and I know I didn't drink enough water. I ran three miles a day and was always tired. I went away to college and had to start over again with making friends and studying. I emotionally ate constantly. Burgers, pizza, beer: Those were my food groups. I was a Sports Medicine major, but I didn't work out like the athletes I helped. I did, however, eat and drink like them. My best friends tended to be the football offensive linemen, who were 300-plus pounds. I transferred schools a couple of times hoping a change of scenery would do me good, but you can't run away from your problems. I just kept the same diet and gaining weight at an astounding pace. By 2003, I was 487 pounds!

Breaking Point: I started working in the radio industry as a talk show host in 2000. It didn't matter that I was over 400 pounds because I was behind a microphone. But after I was laid off in 2003, I had a job interview in Orlando, and the company would only pay for one ticket. I needed two because I was almost 500 pounds by then. I had a size 62 waist. I couldn't afford the other ticket, and I lost out on the interview. I opted for gastric bypass surgery, and the surgery temporarily saved my life. I lost down to 300 pounds and about a size 46 waist. It was temporary because I didn't change my eating habits. I still ate the same crap, just not as much of it, and over the next few years I gained back up to 400 pounds.

In 2007, I got married to my beautiful wife, Karin. Now, I want to be around for her! It was about more than just losing weight, it was about knowing I deserved better in life! I was in a job that I hated, but I didn't think I deserved any better. Life in general was miserable. It just clicked one day. I don't have control over much in my life, but I do have control over my health. That made me feel more empowered.

How I Lost It: I threw out all of my processed food. The only things from a box in our kitchen were soymilk, almond milk, brown rice and whole-wheat pasta. Everything else was fresh meat, fish, and frozen or fresh vegetables and fruit. I learned from a guy who is kind of a health and fitness guru here in Dallas named Larry North that losing weight is 80 to 90 percent nutrition and just 10 to 20 percent exercise! He doesn't even know this, but he helped me out tremendously! I still follow that to this day. You can't work out a bad diet, period! I had surgery to remove 10 pounds of skin from my midsection after my weight loss.

The real kicker was I had to realize I deserved it. After I took control of my health, other doors started opening up for me. I was almost 40, and I needed a new direction in my life. Everyone was now asking me for advice, so I earned my certification as a personal fitness trainer. I specialize in weight loss with my clients that I train here in Plano, Texas, and I also help others with their nutritional needs throughout the country.

Sometimes I'm lifting heavier weights at my gym, TNT Fitness and Personal Training, and put more muscle mass on. But it's amazing that I'm 40 years old with a 32 inch waist! I was a 36/38 in high school! I remember weighing 215 as a junior in high school. I can honestly say I am in the best shape of my life and happier than I've ever been! My wife has also lost 80 pounds, but I don't dare give her weight! The biggest aspect I want everyone to take from this is that we are all accountable for our choices. I don't blame anybody for what I was except myself. No matter what position we are in, it's how you react to situations that make you who you are. It's all up to each and every one of us to decide how great we are going to be! Choose to be the best!

After Weight: I fluctuate between 175 and 185 pounds 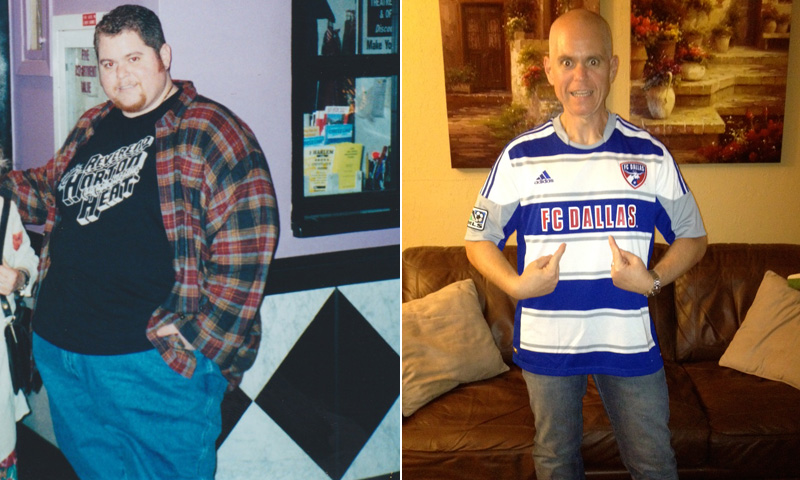 For an update from Brian, check out the HuffPost Live clip below: