How I Gained It: My whole life I have been overweight. My earliest memory of looking at a scale was when I tried out for wrestling at age 13 and saw 260 pounds. I was so heavy that they wouldn't let me wrestle, so I quit. I continually gained weight from bad eating habits picked up from my parents. Oftentimes they would just buy fast food or frozen meals for dinner. We were pretty poor growing up, and both my parents were alcoholics, as well as smokers. This left little money for nutritious foods. We only drank soda pop, sometimes 10 cans a day! I don't blame my parents though; they truly tried the best they could to raise my brother and me. In high school, I began to work full time for a fast food restaurant, eating fast food for at least two meals a day. I never looked to change this habit. Every day I would start off with some sort of candy or donuts, followed by two 16-ounce energy drinks. My lunch would be some kind of fast food. At dinner I would cook something like nachos or fried chicken.

Breaking Point: I had several. The first was when I was 14 years old and was kicked off a roller coaster because the harness wouldn't close. When I would fly, I would have to buy two seats just to avoid being kicked off of a plane. Every time I would go to a restaurant I would ask for a table so that I could fit; most booths were far too tight. If I had to use restrooms in public, I would be terrified the wall-mounted toilets would fall off the wall when I sat down. Outdoor furniture was pretty much out of the question. I even refrained from sitting on many people's dining room furniture. The last time I decided I needed to lose weight was August 2013. I bought a brand new belt from Big and Tall, a size 64. It didn't fit, in fact it wasn't even close. At this point I felt helpless. How much bigger could they make the belts?! Then I went to the doctor for a yearly check-up, and I was borderline diabetic at the age of 28. I realized this had to stop if I wanted to see my children grow up!

How I Lost It: I started to work out three days a week at a gym. I signed up for some minimal personal training (45-minute sessions, twice a week). The gym had a nutrition plan, which was basically the paleo diet. I cut all carbs, went cold turkey on pop and cut all dairy. This diet is extreme and not for everyone. Please talk to your doctor to see if this is right for you. From there I went a step further, doing several Whole30 challenges. I also started drinking a lot of water.

As I lost more weight, I became addicted to working out. Now I work out four to six days per week. I have even started running -- don't ask me why, maybe I'm crazy.

I lost weight, but I gained strength. You have to be mentally tough. Every day you will battle how you look in the mirror. You start to let the scale define you. Every meal becomes a challenge. Will you gain weight when you're trying to lose it? Yes. Will you have moments where you eat bad food? Yes. Will there be times when you feel like you're doing everything right but still aren't achieving your goals? Yes. You must love yourself, trust your support network and trust your program.

I still have a long way to go, but today, I am faster and stronger than I ever thought I could be. I'm no longer scared of booths and have been on the first roller coaster since I was 11 years old. I show my kids pictures of me last year, and they don't even know who it is. I have realized how blessed I am. Losing weight for me has been therapeutic and a healing process. I forgive all those who trespassed against me when I was younger. I forgive my parents for not being the best role models. I forgive myself for dragging my health to a point that needed this extreme of a change. I can now run around with my kids and not be tired. I have more energy to be more active in church. My wife is definitely loving the new me, physically. 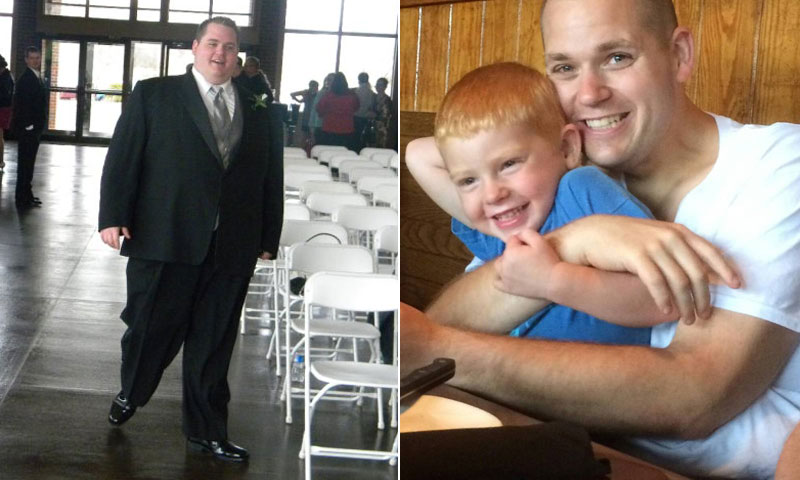