How I Gained It: I always thought of myself as being overweight, even back in high school, when I was chubby at best. Looking back at my pictures from high school, I don't know what the heck I was thinking. I looked fine! I wasn't particularly active in high school, but I was in the Flag Corps and that got me into a bit of exercise. I'd never been serious in any other sports or jogging or roller-blading or anything though. I would eat whatever the school prepared for lunch (French fries, pizza, etc.) and then would go home and eat whatever my parents had made for dinner. I would snack off and on, without really gaining much. I still had that fat-girl mentality though, since I didn't look like the people in the magazines and on TV, so I went back and forth with different diets and different exercise regimes that usually failed within the first week.

In college, I started eating at the dining halls and keeping snacks in my room, and the only exercise I had was from walking to and from my classes, a 10-minute walk each way. This is also when I met my first boyfriend, who had horrible eating habits. I would eat what and when he did. This period of my life started me in a very unhealthy pattern. We would eat Taco Bell or Wendy's every day, sometimes twice a day! We would each eat a whole box of macaroni for dinner sometimes and pop was the only thing we drank.

I was gaining much more weight than the expected freshman 15, and towards the end of my first year in college I had reached over 200 pounds. I was horrified that I had let myself get to more than 200 pounds. I decided I would go on a diet, so I started eating grilled chicken every day. I was trying to eat what I thought was healthier, but wasn't getting any activity and didn't really understand food labels. I cut out pop, but started drinking a huge amount of chocolate milk. I would go back to pop again, off and on. I continued to gain more and more weight. Things got worse as my time in college continued. I was living off campus and eating fast food for every meal instead of eating in the dining halls. I didn't really cook much either, so I just continued to stock the apartment with horribly fattening foods and pop and chocolate milk and candy.

My junior year, I studied in Spain for four months. My host mom would make wonderful meals for lunch, full of vegetables and chicken and seafood. We had water for every meal. The problem was that she would stack my plate with a huge portion. Then for dinner, we would have all fried foods: fried eggs, fried ham/chicken/fish, hot dogs, french fries, etc. Even though we had a different variety of food, the portions were too large and the choices were not always healthy. I was walking a ton more than I ever did in the States, but even with all the walking I still continued to gain weight and then knee problems, too.

Breaking Point: When I got back to the States, I weighed myself. I had crept up to 260 pounds! The summer after I had been in Spain, I went on a family hiking vacation. That trip was one of the hardest I've ever taken. I'd sweat so much walking up the smallest hill. I would walk faster than everyone else, so that when I reached a checkpoint, I could stop and catch my breath while I waited for them to catch up. I was embarrassed by how out of shape I was. That summer of 2008 was the biggest I have ever been. I weighed in at 278 pounds! I felt horrible and tired all the time. I was getting sick all the time. I had problems with the smallest physical tasks and my confidence level was as low as it has ever been, and that's when I realized I needed to do something about it.

How I Lost It: Around this time, my mom had started doing Weight Watchers. I was skeptical of it, but was seeing amazing results in her. I talked to her about it and decided that this might be my last chance to make a change. I would put everything I had into this program, and if it didn't work, nothing would, and I would just have to accept being obese for the rest of my life. I weighed in for the first time with Weight Watchers on June 25, 2008 at 275 pounds. I set my mind and committed fully.

I started to realize just how bad the food that I'd been eating really was and started making healthier choices. From July to December 2008, I lost 46 pounds. I was receiving compliments from friends and family and was even inspiring others to join WW and my confidence started going up. That winter, I got off track and stopped weighing myself and stopped tracking food, but tried to follow what I had been doing and managed to maintain my weight.

In February 2009, I broke up with the guy I had been dating after three and a half years. This was very hard for me, but instead of going back to old habits, it renewed my strength and motivation, and I got back into WW with a new determination. I was thinking about dating again, but I was still very large and didn't have confidence that anyone would want me. So, in addition to doing WW, I decided to start working out. I had lost a good deal of weight and decided to start out slowly. I chose to do a Couch to 5K program. By August 2009, I had lost another 42 pounds. That summer, I was introduced to P90X, and I started doing that in September. I managed to lose another 12 pounds and hit a 100-pound loss by November 2009! In a little over a year I had gone from a size 22 to a size 8/10 pants. I had gone from a BMI of 44 to a BMI of 28. I had lost 14 inches in my hips, 12 in my waist and felt amazing! I let myself get a little comfortable at that point and from November 2009 to March 2010 I gained 25 pounds back. I felt out of control, but this time, I knew what needed to be done. I set my mind once again and started tracking my points and doing the P90x and then Insanity too and even completed running a half marathon.

It's been five years now since I started my journey and four since I lost the 100 pounds. I have mostly maintained in the last couple of years, which I've heard is not an easy thing to do. I'm working on losing the last 20 to 30 pounds to get to my goal weight, but I am still figuring things out and I cannot even begin to explain the difference in the person I was then and the person that I am now. I have so much more confidence in myself, and because of that was not afraid to find someone who loves me and values me as I deserve. I'm not afraid to try new things. My energy level and physical health have improved drastically. I am no longer a member of Weight Watchers. I decided to continue learning about nutrition and fitness on my own, and my husband and I have developed a more paleo way of living. I blog about my learning experiences and everything that I'm currently doing. I know I'm going to reach my goal, but I now realize that my happiness does not depend on that one number. My focus is being as healthy and happy as I can be and living each day to the fullest. Everybody is different, and I think one of the biggest lessons for me throughout this experience is that you never stop learning about yourself. There is always an opportunity to grow and discover something new. And I love that! 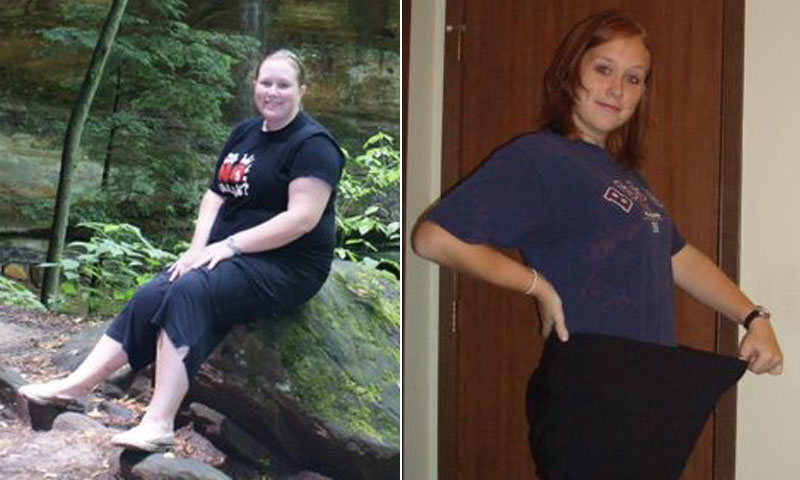