How I Gained It: I was always a big girl. I was 11+ pounds when I was born. By the time I was in fifth grade, I was 130 pounds. In high school, I was in the 230s. I was never really taught about portion control. I loved going out to eat and sometimes did a few times a day. My mom worked and went to school full time, and my dad owned a business, so a lot of times I was left to my own devices when it came to what I wanted to eat.

I was bullied. I was asked if I was a boy or a girl because I never wore form-fitting clothes or makeup. I had no self-esteem at all and eventually dropped out of high school at 16 to get my GED.

I got pregnant with my first child at 19 in 2007 and only gained about 20 pounds and lost that, plus some, almost instantly after she was born. I stayed in the 220s, yo-yoing a bit. Eventually, I was put on antidepressants, and after about a year on the pills I started steadily gaining weight. I became pregnant with my second child in 2009, and at my first obstetrician appointment, I weighed 265.

Breaking Point: I gained almost 35 pounds during that pregnancy. After my son was born in 2010, I was horrified that I had been so close to going over 300 pounds. I didn't want my children going through the same thing I did growing up and missing opportunities I didn't take because of my weight.

How I Lost It: I joined a weight loss group when I was down at about 273 pounds. I was scared to death showing up for the first meeting! It was a 12-week program, and we met every week, talked about good nutrition and got weighed. Whoever lost the most in 12 weeks won a pot of money from all the contestants. It made me accountable for my actions to know that someone would be judging me every week.

I cut regular soda out completely. I was drinking protein shakes twice a day and eating one meal that was around 500 to 600 calories. I won the first round by losing close to 20 pounds. It was amazing watching that scale move down! But it was hard just eating once and drinking two shakes a day, and I was always at conflict about wanting to go out to eat or have dessert. Eventually I dropped out of the meetings and went back up to 250 pounds. I stayed that way for a few months before I started thinking about how good I had felt losing weight. I started back up, trying this time to make a complete change to my life -- not just my diet.

I started counting calories with an app on my phone. It helped to see how many calories I was really eating. No wonder I wasn't losing weight! I started trying to make healthier choices without having to substitute shakes for my meals. After a while I no longer craved all that junk food and learned what normal portions really looked like. I realized when you're not dieting but instead changing your entire lifestyle, nothing is really off limits and eating isn't something to be ashamed of. As long as it's portioned and you're not eating that whole pizza pie, why not have a slice or two?

I cut out about 500 calories a day. I was also doing the elliptical when I could, and every day when I had some free time, I would walk for at least an hour and try to stay active with my kids. I lost an additional 80 pounds over the course of about two years.

Today, I'm the smallest I've been since junior high school. I feel like I can show my kids how to live a healthy life.

Current Weight: 162 pounds -- and still losing. My perfect weight would be around 150 and toned. 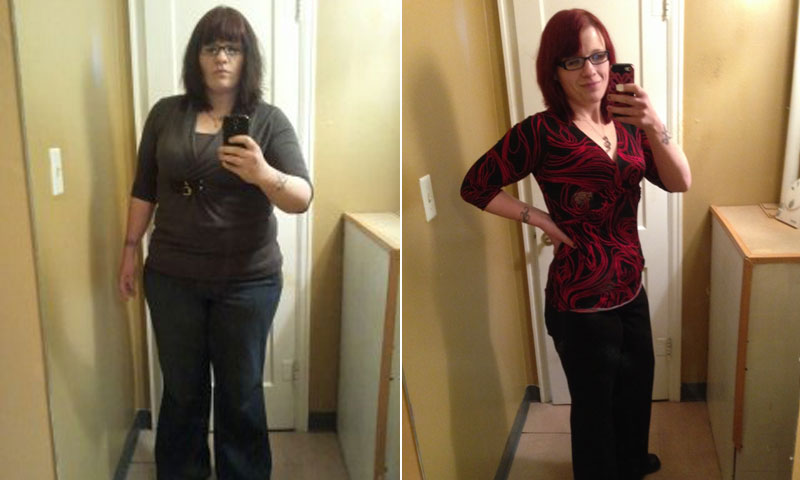