How I Gained It: I am one of those guys who has always been heavy. Growing up, I was almost always one of the biggest people in the room. That never kept me from eating like a complete garbage disposal. I ate nachos and quesadillas a lot, and there was a time when I would drink four or more 20-ounce sodas a day. By the time I got to college, I was not able to purchase pants off the rack. By the time I graduated college, I had trouble fitting into booths at restaurants.

I tried all sorts of crash diets, and I even went for a bariatric surgery consult. It turned out that I was a candidate. I left the doctor's office feeling like a miserable failure, but I decided that as a 30 year old, I was still young enough to take control of my life. I had no idea how much I weighed until I went to the doctor's office. The first scale didn't go high enough, so they had to take me to a different scale.

Breaking Point: It took me another couple of years, but one morning I woke up and realized how I could succeed at losing weight. Because of my drive to do well in business, I figured that if I could run my weight loss like a small business, then maybe, just maybe I could find the motivation to see it through.

How I Lost It: I started a blog called The Business of Losing Weight and started using social media to raise up a group of "investors" into my business plan. I referred to my followers as "shareholders", and I used my blog to give them stock reports on my weight loss. I asked my shareholders to help hold me accountable, and the support was overwhelming.

I started counting calories and using a phone app to track my food intake. It turned out I was eating somewhere around 5,000 to 6,000 calories a day. I restricted myself to 1,800 per day at first. It didn't take me long to realize that it wasn't a lot of calories if I tried to eat the same foods I had been eating. I realized I could eat more nutritious food that would fill me up for fewer calories. When I realized I needed to look at food as fuel and not as comfort, I started cutting out processed foods and eating more "cleanly".

I knew that exercise was a must, but I was pretty much a lethargic slob who got winded walking up the stairs. I still weighed over 330 pounds when I decided to jump head-first into this venture. I was intimidated by exercising, not because of the physical activity, but because of what people would think about me. That part was harder than the actual exercise. I started out by getting an elliptical machine at my house. I would do 30 minutes a day on it for a long while, then moved up to 45 and eventually 60 minutes. I started losing a good amount of weight between that and the new-found way of eating.

When I felt like I was no longer burning the calories I needed to maintain the weight loss, I got a treadmill and started running. I was still "hiding" from people by exercising in my house. Fear kept me from taking my exercise to the next level. Eventually I got over it and joined a gym. Suddenly I realized that people weren't going to make fun of me for being a fat guy who was going to the gym. I got so much support it made me an emotional wreck. Long story short, I started doing group exercise, meeting more health enthusiasts and fellow weight-loss travelers and got talked into doing a 5K, which led to a 10K, which led to a sprint triathlon, which led to a half Ironman, which led to me receiving the South Carolina Triathlon Series Rookie of the Year award! The progression happened so quickly that I still look back and think, "How the h-e-double-hockey-sticks did that happen?!"

It has been an incredible journey thus far. One of the greatest joys hasn't even been my own weight loss, but rather the inspiring stories that I have heard from other people who have told me that my journey has inspired their own. 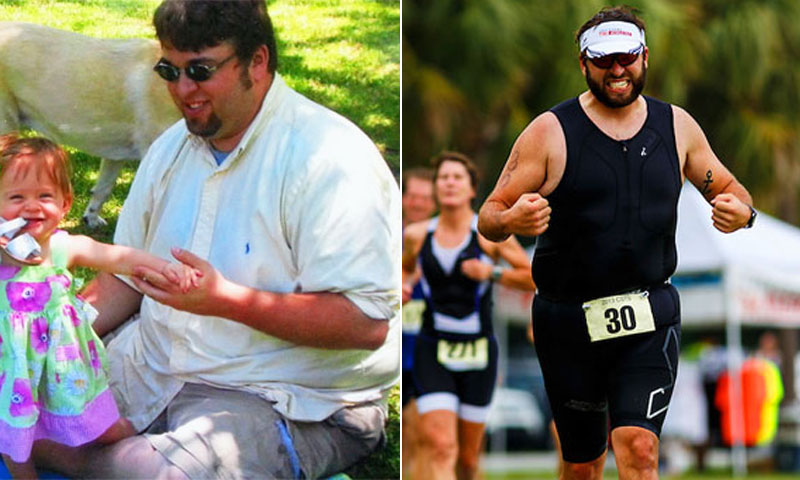 More:
healthy livingironmanpounds lostFitness and Exercisetriathlon
Newsletter Sign Up
An essential daily guide to achieving the good life
Subscribe to our lifestyle email.
Successfully Subscribed!
Realness delivered to your inbox