Name: Heidi Riess
Age: 43
Height: 5'10"
Before Weight: Over 385 pounds. This is the highest weight I remember, but I know I gained weight after.

How I Gained It: I started gaining the majority of my weight after a family tragedy at the age of 14. I would often hide in my room eating large quantities of food to help me deal with the loss of a family member and the pains of being a teenager. Through the years, when dealing with any kind of stress, this behavior would just intensify. I would eat salads and grilled chicken in public, then binge on fast food, ice-cream, chips or anything I was craving that day in private. I was a person of extremes.

Breaking Point: I work for the USPS, and my job is very physical. It involves a lot of bending, twisting, pushing and lifting. I was in pain, so I made an appointment with a doctor. The doctor's solution was to just write me out a prescription. I know people who have developed addictions to pain medication, and the thought of that frightened me. I always knew that I had to be honest with myself and face the fact that the pain I was feeling was because I was morbidly obese. I never had the prescription filled. Instead, I joined a gym, and my whole life changed.

How I Lost It: My weight loss has been a slow process with many ups and downs. It has taken me over four years to lose the weight.

In the first year, I lost over 50 pounds simply because my job changed. During the second year, with the help of my personal trainer, I shed not only another 50 pounds but gained strength and self-confidence. Then, I had a year during which I lost nothing, despite exercising five to six times a week. Even though I had increased my activity level, my eating habits were still out of control. I would go from one extreme to the other: I'd eat only natural foods, and meticulously weigh myself and count my calories. But if I had even one bite of what to me was "bad" food, I would start bingeing, saying, "Just this last time, and then I'll never have so-called 'bad' food again."

On March 28 of this year, my trainer and I had a heart-to-heart. I said, "I think I give good advice, I just don't follow it." He told me to follow one of those things for a week and see how I felt. Every day I would start with a positive affirmation, even if I didn't feel it was true. By the end of the week, I felt great. I started thinking about words and how powerful they are and how changing a few of them could make all the difference.

I no longer say I "can't" have something. I can have whatever I want, and sometimes I choose to and sometimes I don't -- and that is okay. I no longer say things like, "I was so bad yesterday because I had a piece of cake," nor will I say I was good if I didn't. Food shouldn't have any morality attached to it, nor should we define ourselves by our food choices. I started introducing those previously-banned foods back into my diet with this new mindset. And since then, I have lost an additional 65 pounds.

What I have gained is immense. I no longer feel the need to binge. I have gained the knowledge that it is okay not to be perfect, that just because you decided to have ice cream doesn't mean you blew your diet. I learned to be more forgiving and to love myself more each day. I started following Facebook pages with positive messages and fell in love with their common-sense approaches to fitness and weight loss. I now eat enough calories to support my activity with a slight deficit for weight loss. I restrict absolutely nothing. I enjoy food, but no longer use it as an emotional crutch. I am happier than I have been in years. 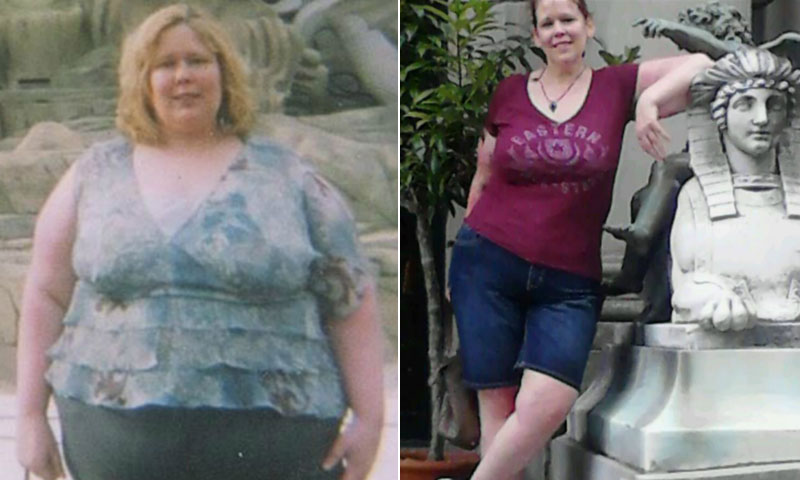