How I Gained It: I was in a head-on collision in 2002, and I shattered my ankle. My mobility was greatly affected, and I also became depressed because of the pain. I used my mobility issues as an excuse to stop the physical activity I once enjoyed, like hiking. I have always been an emotional eater and tend to eat high-fat and high-sugar foods when I feel depressed, so I packed on the pounds pretty quickly, going from less than 200 to over 300 in about 10 years. I had a second surgery in 2010, which helped my pain somewhat, but I still continued to gain weight because I was not getting enough exercise and eating way too many carbs. I ate a lot of convenience food, like chicken nuggets, and drank too many sodas on a daily basis.

I love to ride theme park rides. On a visit to Dollywood a few years ago, I found that I could not enjoy riding many of the rides because I was too large for the safety harness. I tried to ride the swings and couldn’t fasten the belt. I was very embarrassed and ran off the ride, hoping that no one noticed.

Breaking Point: My mom developed type 2 diabetes, and I was told by my doctor at the same time, in 2012, that I had pre-diabetes. My boyfriend, who I live with, is a type 2 diabetic, and I knew that if I changed my eating habits it would help him, too. I went with my mom to her dietitian, attended a few dietary education classes with her and realized that it would be relatively easy for me to make some nutritional changes. Also, I was told in 2012 that I was not eligible for a surgery I needed because I was at least 50 pounds too heavy to go under anesthesia.

How I Lost It: I started writing down what I ate on a daily basis, and when I counted up the nutritional content, I realized I was eating too many carbs per meal. I already ate a lot of lean meats and veggies and had made a few other changes in late 2012, but after going to nutritional classes with my mother, I started choosing lower-carb foods and eating low-calorie, low-carb snacks. I started losing about two pounds per week, which was good for me, so I just maintained what I was doing and kept shedding at least two pounds per week for almost the entire year of 2013.

As I started losing weight, I felt less pain in my ankle, which led to me moving around more. I wanted to go outside and felt like walking more and staying on my feet instead of taking shortcuts and sitting down. I also started swimming for exercise, which was also a good way for me to deal with my arthritis pain.

I love wearing more fashionable clothing now. When I was heavier, I thought I would never be able to wear a dress. Now, I have an entire collection of dresses that I love to wear almost every day! I never thought I would be able to shop anywhere but plus-size stores, but I'm now able to find something to wear at almost any store, which is lovely. My boyfriend has lost at least 50 pounds, which has helped his diabetes significantly. And last fall, even though I had not quite lost 100 pounds yet, I was able to ride many rides at a local traveling fair -- including the swings!

After Weight: 190 pounds and still losing. I love my curves and don't want to be stick-thin, but I would love to get down to about 165. 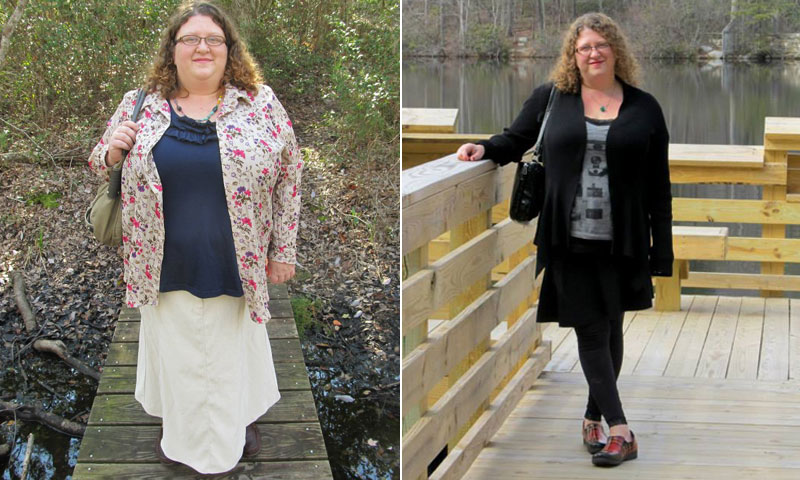