How I Gained It: My childhood is filled with food-related memories, from helping my parents in the back of their restaurant, to having daughter-dad time each morning before I went to school over a full breakfast, to the frequent trips to buy a dozen candy bars for my mom. By my early 20s, I weighed 225 pounds. A few years later, I got married, and my weight continued to increase as I spiraled into depression. I was a teacher and developed the habit of going to bed as soon as I got home from work around 4 p.m. and staying there until the next morning. I finally maxed out at 297 pounds, and though I lost 50 pounds when I changed careers to law enforcement, I settled in at 250 pounds for the next eight years.

Breaking Point: Having separated from my husband in 2011, I felt like a complete failure, and that was reflected by my not taking care of myself. Even at the plus-sized stores, I had a limited selection, as I was up to a size 24W. I was miserable and working 70 hours per week to avoid facing the emptiness in my life. When I was at home, I would finish off an entire bottle of wine with some Chinese delivery in less than 90 minutes before passing out for the night. After six months of that, I felt I would probably die if things didn't change due to how I was treating my body.

How I Lost It: I started working with a therapist and a few months later hired a personal trainer, as I did not believe I could lose any more weight on my own. Most trainers in my area emphasized a "tough love" approach to working with clients. I wanted a trainer to partner with me, not yell at me. I finally found the perfect one. During our first session, he told me I needed to change my thinking so I could have long-term success with my weight and that he was going to support me in doing that. When I described myself as a "fat chick," he quickly cut me off -- I was no longer allowed to speak negatively about myself.

During the second week, he taught me how to do a simple five-minute meditation where I would take a small "me break” in the middle of the workday to just be grateful for all I had, including the body that was supporting me in what I needed to do. Though it seemed like an easy task, setting aside five minutes to take care of myself was very challenging some days. It made me confront how much more value I placed on my work than my own health.

I purchased a notebook to write down the BLTs I ate: every single bite, lick and taste. I didn't look up the calories or have any forbidden foods, but rather became very aware of what I was eating. My trainer asked that I bring the notebook with me to each session and he would review it. I respected him and often avoided eating something because I didn’t want him to see it! When I did overeat, we discussed why and what I could have done instead. I learned he was more concerned with me becoming aware of my triggers and to deal with why I was eating, than whether or not I ate a cheeseburger once when I was upset. Writing down every bite stopped me from mindlessly eating. I had to pay attention to how much I ate so I could record it accurately, and that caused me to stop eating much sooner than I typically would have.

Those notebooks did double-duty as my personal journals: I wrote about how insecure I felt. I wrote about the anger I felt toward my husband. I wrote about the craziness at my work. Writing gave me something to do other than eat, and it helped me to release the emotions so I didn't bury them in food later. I started feeling better about myself and making choices about my eating and fitness with a desire to be loving to myself.

Initially, I worked with my trainer twice per week, and walked on my home treadmill three times per week. It was all I could do. After a few months, I started attending his indoor cycling classes. Following the first class, a couple of the students walked me down the stairs to make sure I didn't collapse and tumble down! For the next two days, I laid in bed as my legs were so sore. Yet, each week it got a little easier. After six months, I had lost 80 pounds. At the end of the year, my weight was 150 pounds, and my life had totally changed. My divorce had finalized, I was healthy, I had adopted my first dog and moved into a new home.

I still saw myself as being overweight because of all the rolls of skin that remained, so in April and June 2013, I had surgeries to remove skin from my stomach, breasts, arms and thighs. I regained 20 pounds while I was on bed-rest recovering, but I'm working on getting rid of that now. I've since earned my certification as a personal trainer, weight-loss specialist and Spinning instructor. The best part is that I am happy! I no longer worry if people are staring at me or judging me for what I eat. I can just now be seen as me. 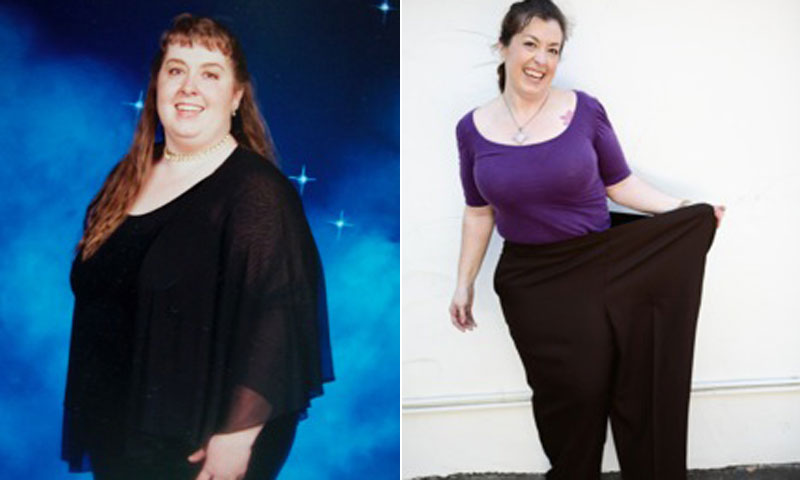