How I Gained It: I was 20 when I met my wife. I had been smoking like a chimney for almost a decade, and I had no aspiration of quitting or doing anything differently. A couple years later, when she started having allergic reactions and her health was affected just by my smoking, I knew I had to stop. That was probably the hardest thing I've mentally and physically had to do. In 2007, as a New Year's resolution, I made the decision to quit. I started cutting back, and then in March, I threw the pack away. I was good for about three months, and then I relapsed. I had a cigarette on July 4. The first time I quit, it was for my wife. She never asked me to quit, but I did it because of her, for her and her health. But she helped me realize that I needed to do this for myself and not for anyone else, so when I quit again in March 2008, I quit for good.

After I quit smoking, I could actually taste. I absolutely loved food now that it didn't taste like ash. I spent the year fully enjoying food, and the next year, my wife got pregnant with our first child, which led to sympathy weight gain. No one really paid too much attention to it, but I went from a 26 waist to a 46 waist.

Breaking Point: I saw a picture of my son and me and realized I hated the way I looked. When I was 20, I was a skinny, 140-pound guy, and in two years I had more than doubled my weight to 300 pounds. It felt foreign and unacceptable. I didn't like the way I looked, and I knew I had to change.

How I Lost It: During a company Christmas party, a couple of coworkers suggested we participate in a "Biggest Loser" type of event, and we would add some monetary value to sweeten the deal. I saw it as an opportunity to change. I put $200 in the pot to give myself motivation. I started with a simple diet and a plan to walk every day at lunch with friends. Slowly, people quit for one reason or another. I beat the competition by losing 20 percent of my bodyweight, weighing in at 215 pounds.

But just like when I quit smoking and relapsed, I did the same with my weight-loss journey. I reached my goal and felt great -- and started eating again. Just like with smoking, I lost weight for the wrong reason the first time; the weight-loss was for myself, but it was for my image and not for my health. I wanted to look better, and I wanted people to see me differently. Work was stressful, home life was stressful, we had just had another baby, we were saving to buy a house, and within a year, I was right back up to 270 pounds.

I also started having anxiety and panic attacks. During one such attack, I thought I was actually having a heart attack. I had my wife pick me up and drive me straight to my doctor's office. He told me I was not having a heart attack, but I had anxiety and high cholesterol. He started me on cholesterol medication that I would basically have to be on for the rest of my life.

That's where it got serious for me. I had an amazing wife and two beautiful children. We have a wonderful life, and I wanted to be around for everything it has to offer. My maternal grandfather had died of a heart attack, and my uncle had just gotten out of the hospital from a heart attack. Being medicated really hit a nerve with me; it really changed my way of thinking. Just like quitting smoking, this was a decision and a lifestyle change I consciously needed to make.

I started with eating well and walking. I had no idea what I was eating was wrong, at first, so the biggest change was forcing myself to pay attention. I kept a food diary of literally every single thing I ate or drank, all day, every day. I cut out fried foods, cut back on red meat and started eating fish, chicken, fresh veggies and salads. I drank more water than I probably had in my entire life, and I also was very loyal to taking my vitamins. These days, I wonder why I even ate that much of the "bad stuff" to begin with.

This time I also ended up running! My wife purchased a second-hand treadmill as a surprise, and it really helped to motivate me. I also joined a fitness group online to help keep me accountable and motivated. I downloaded apps on my phone to help me do pushups, sit-ups, squats and pull-ups.

Eventually, I participated in a 5K and a 10K -- what a great feeling that was! But the best was on May 4, 2014. I completed the OC Half Marathon in less than two hours, with my family and friends cheering me on at the finish line, wearing shirts they made for me.

I have lost a total of 145 pounds in my journey. My goal is to maintain my weight and gain muscle mass. Though I have been mostly running, I'm interested in biking and swimming and hope to complete a triathlon one day!

I am proud to be an involved, active father and positive role model for my children. I am happy to be a healthier and happier man for my wife. And I am proud of myself for doing something I wasn't sure was even possible. I truly love my life and value everything I have. It is worth living for. 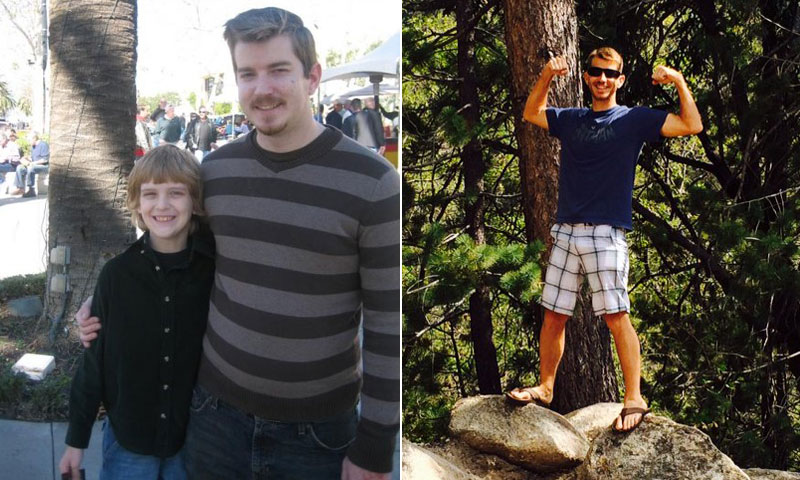