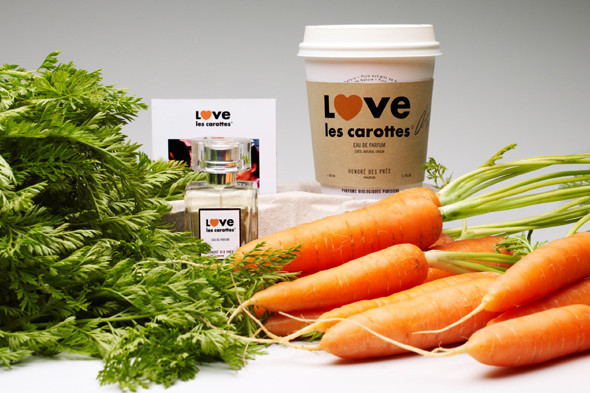 With descriptions like "reflective" and "high-pitched" alongside equally hard-to-imagine ingredients like frozen morello cherry and floral woody chypre, fragrance reviews can be... a little hard to grasp. In our new series, Top Notes, our editors will road test new and classic fragrances, and report back what they really thought. This week, we're starting with one of the indie perfume world's most interesting (and slightly unconventional) scents -- Honoré Des Prés I Love Les Carottes.

What were you initial thoughts of the fragrance?
My first reaction was "Oh, I really like this!" and then my second response was "Whoa, this really smells like carrots." I realized that it was mostly because I knew the fragrance was made of carrots that I could smell that scent so strongly. It has a very complex smell – raw and fresh - and I was excited to see how it changed throughout the day.

Did it remind you of anything--person, place, memory?
It reminded me of being in Shelter Island or being somewhere near the beach that still had lots of trees.

How did it compare to other scents you've worn?
I generally wear more floral scents, especially in summer so this had a little more spice to it.

Light enough for muggy NYC summer days?
Absolutely. There is a fruitiness to the perfume that is perfect for summer. It is light, but not too sweet.

How did the scent evolve throughout the day?
Throughout the day the scent lost some of the carrot-ness and blended well with my skin. I applied to my wrists and neck and then I wore it walking around the West Village while it was over 90 degrees. The scent somewhat faded and changed throughout the day, but it was still recognizable. The way it smelled an hour or more after I applied was my favorite.

How did it feel to be... carrot-scented?
The first morning I applied the scent, I asked a male friend what he thought. He said, "You smell like carrots. You smell like carrots and you are wearing an orange dress. You are a carrot." I immediately regretted my wardrobe choice.

What did others think of they you smelled?
One person said that I smelled like a garden (which I thought was pretty accurate) while others merely described the scent as "sweet with a little spice but it kind of reminds me of V8."

Would you continue to wear this scent?
I would, but I would make sure to apply at least 30 minutes before leaving the house so that the carrot-ness had a chance to fade. I think it is great for summer especially as the season transitions to fall.

What were you initial thoughts of the fragrance?
As with eating one's root vegetables, I Love Les Carottes was an acquired taste. I initially thought it was too strong, but by the third day I was a carrot convert.

Did it remind you of anything--person, place, memory?
My mother's cooking.

How did it compare to other scents you've worn?
I tend to have an affinity for fruity florals, and this was a bit sharper.

How did the scent evolve throughout the day?
It became less and less potent--I could barely smell it by evening.

How did it feel to be... carrot-scented?
Healthy.

Would you continue to wear this scent?
Yes--but more likely when autumn rolls around.