Standing in her bathroom, Bekka passionately belts out an out-of-tune rendition of Katy Perry’s “Firework,” while her best friend Lucy sits on the toilet trying to decide whether her roommate has what it takes to audition for “The Voice.”

And that’s just the first episode of the web series “I Love Lucy & Bekka,” which seeks to give an honest look into the friendship of two girls via snippets of the quirky conversations and small experiences that bind them together. Roommates Lucy and Bekka, played, respectively, by Kristolyn Lloyd (“The Bold and the Beautiful”) and Gina Rodriguez (“Jane The Virgin”), are the main focus of the Los Angeles-set web series, which was released in full on YouTube late last month. The twelve episodes, each only an average of two minutes in length, cover everything from the similarities between gang bang porn and “The Bachelor” to what crosses your mind when you find out via Facebook that a past acquaintance has died.

The series began through a Kickstarter campaign in 2013. The show's creator, NYU Tisch alumna and playwright Rachael Holder, 31, needed $5,500 to create the series, and ended up surpassing that target. The first episode has garnered nearly 15,000 views.

Holder spoke to The Huffington Post about what inspired the web series, what makes strong female friendships so unique and how she feels about writing for a diverse cast as a woman of color. 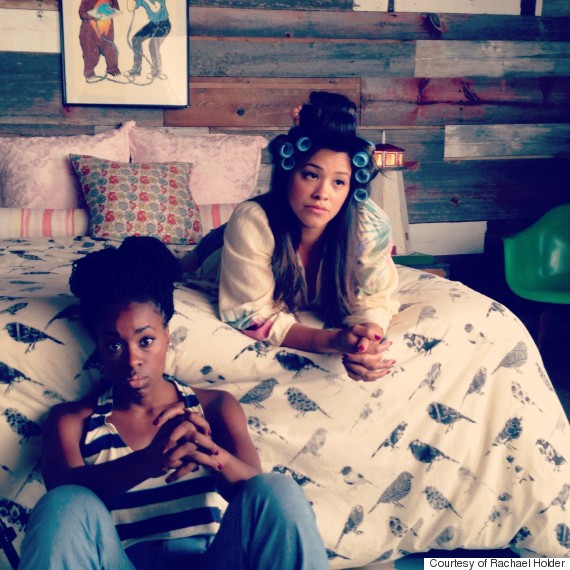 Kristolyn Lloyd (left) and Gina Rodriguez on the set of “I Love Lucy & Bekka.”

“I Love Lucy & Bekka” is a very focused web series. There’s almost zero emphasis on who these girls are as individuals, and all about who they are as best friends. Why did you decide to make their friendship the centerpiece?

I think that I really love writing women and I really like writing about female relationships because our friendships are really unique and intimate and interesting in that way. Men have bromances, and women have very complicated and glorious connections. I haven’t really seen much of that in TV. And I’m obsessed with my girlfriends. These conversations are very similar to the conversations that I had in my early 20s. You know, four hours a day just talking to each other on the phone or talking in the bathroom about whether or not we would still be friends if we were ghosts, and stuff like that.

I loved that time so much and I wanted to showcase a friendship that was about immediate forgiveness. There’s so many "odd couple" shows where the girls or the guys are so different that they clash and there is conflict all the time. I thought it would be interesting -- just like in my own best friendship, when the conflict is that you love that person so much, and you’re still having intellectual conversations and giving them good advice, but it’s through love.

What truly caught my attention, though, was the fact that these episodes are incredibly short.

"Men have bromances, and women have very complicated and glorious connections."

I think that I wanted to make sure that I was accomplishing the nugget of what was good about these conversations, instead of just waiting around to get to the golden part of it. I wanted to just get to the juice, get in and get out. ... I wanted [the episodes] to be like Skittles, instead of long meals.

Gina Rodriguez is having a big moment right now with The CW’s “Jane The Virgin.” I know the web series was filmed before the show’s success, so how did you two connect for this project?

I met Gina my first year in LA. I met her at a party and she grabbed me and she was like, "You write funny stuff, we should work together one day.” So when we were casting this, Gina was one of the first names that came up in my mind. Then I just wanted to make sure that the person that we cast as Lucy had genuine chemistry with Gina. ... When Kristolyn sat with her and they were just talking together, you could see the real friendship and the real chemistry between the two. It was a no-brainer.

And your two leads are actresses of color. That's more diversity than you see on many shows today. Was that an intentional part of your casting process?

We did audition white actresses, we auditioned the entire rainbow, [but] when Kristolyn came in -- as a person of color, as a writer of color -- I crushed, to be completely honest. I was so excited and happy because I’m a person of color and I like to write for people of color and I especially like to write my voice for people of color. I think it’s a really exciting time right now ... I think people are really excited to see more characters and actors of color on their screen. 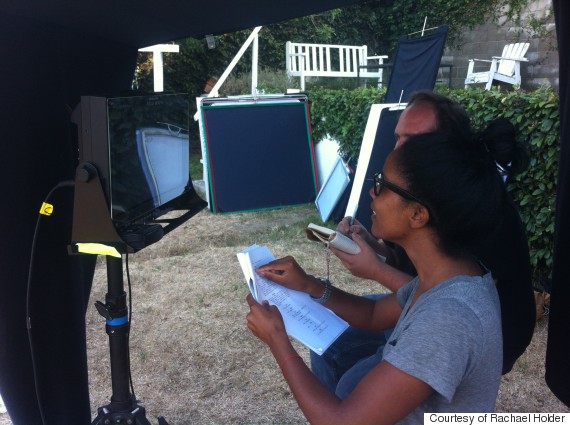 Holder (left) behind the scenes of "I Love Lucy & Bekka."

Writers approach their characters of color in different ways. Some feel it’s best to keep a character’s ethnicity or race in the background rather than emphasizing it. How do you feel on the subject?

I think in this first season of the show it wasn’t a focus of mine, because I was really focused on the girls. I’m not a colorblind person, and so when I write people of color, I am taking what makes them who they are into account. So I don’t think it’s something that I have to decide. But I never, ever want to put the color of someone’s skin to the side.

The comparison is being done for me. I watched an episode from this past season and the farmer had them do a competition where they had to milk cows and then drink the milk as fast as possible while in bikinis. I mean they’re in bikinis, there’s white liquid coming out of their mouths.

That’s an image that’s going to be hard to get out of my head.

It’s crazy how similar it is. I find it really interesting that all of America is obsessed with "The Bachelor,” they think it’s an amazing show about love.

But shifting gears back to Lucy and Bekka, will viewers get to see more from these two soon?

Creatively, there is a second season. I have one, but we’re just not sure right now whether or not it will be in web series form or in a long-form context. ... If people would like to know what happens next with Lucy and Bekka, they will probably learn what happens next. We’re excited to put that out there.