The 90's are back in a big way. Just peruse your Facebook feed to find the "The 99 Best Soundtracks of the '90s" to see the grunge decade is suddenly all the rage. Boy bands are reuniting, shows like Boy Meets World are coming back as spin offs and today's pop music sounds as if it was being streamed directly from 1996.

One thing no one is nostalgic for is the internet from the 90's. Those ancient dial up modems that connected to phone lines were horrible! Today, we are free from the tyranny of a land line; the internet is everywhere and forever changed the way we communicate. The advent of broadband and all the new innovative services it offers also creates real challenges for policy makers seeking to apply some basic consumer protections for next-generation services. 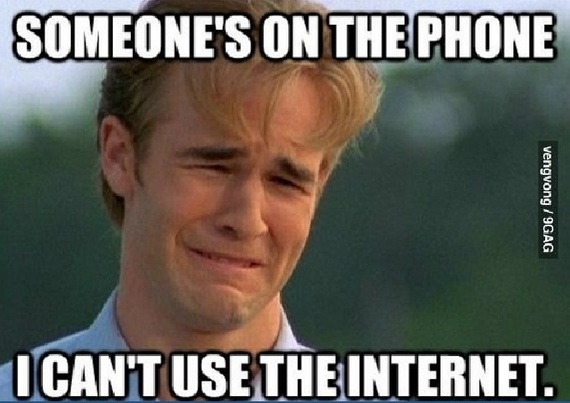 The good news is that the marketplace, as well as regulators, and providers are beginning to align around a revised set of fundamental standards that should be applied to the future of America's communications network, and help guide what FCC Chairman Wheeler has termed the 'Network Compact': accessibility, interconnection, and public safety and security. The challenge currently facing policy makers is more about how to craft and bring into line these protections in a sphere where consumers self-select platforms, services or applications when they may or may not be consistent with these core standards.

A new study by Anna-Maria Kovacs contends that policy makers should work to free the market from an obstructive regulatory framework based on technology and move to craft legislation which focuses on meeting the specific needs of consumers in today's new digital marketplace. According to the report, any new regulations should be narrowly targeted to address areas where consumers recognize it as necessary, such as instances where consumers are potentially vulnerable and where markets fail to meet their needs.

Kovacs has a point. The days of limited consumer choice are quickly becoming a distant memory; all one has to do is look at our own families to better understand. My mother recently spent a month in Mexico on business. While there she and I mostly communicated by using an instant messaging app on our mobile devices. My grandmother, who is never on the internet, would call my cell from her land line and relay messages for me to deliver directly to my mother in Mexico. Over the course of the month our family used cell phones, tablets, landlines, and wireless networks to communicate over thousands of miles.

Expanding consumer options and preferences has forever broken down traditional standalone wire line, wireless, cable and broadcast services. According to Kovacs, 89% of households subscribed to wireless voice by the end of 2013, either by itself or in combination with some supplemental type of wired voice service.

Additionally, 29% of consumers prefer the blend of wireless service with plain old telephone service (with voice capabilities) and 22% with voice over internet protocol. Those figures are corroborated by a recent Pew Research Center study, which shows that as of 2013, 70% of adults had fixed-broadband access from home, a number that rises to 80% when access via smartphone is included. And most notable, are the 38% of consumers who rely solely on wireless.

Given this data it is clear many households are combining some form of fixed broadband (including some forms of fixed wireless) with mobile wireless broadband. All of this underscores the need for a new regulatory network framework based on the recognition of the diversity of consumers and the various choices they have today in a 21st century broadband world. Continuing to rely on the same old wired telephone regulations to govern a world where consumers communicate in different forms, and over various platforms and services, no longer makes sense.

Today, we can indulge our 90's nostalgia precisely because the internet has grown beyond the scope of those old regulations. As a result we can watch episodes of the X-Files on tablets, tweet from our smartphones and read a recap at TV.com. While nostalgia lets us relive positive memories of the 90's, we should let bad ones, like our old network compact rest in peace.