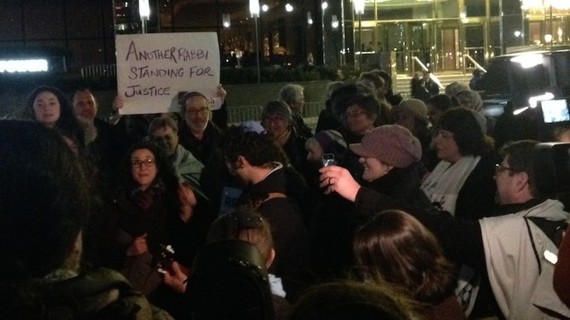 Last week, I attended a convening of rabbis and cantors from around the country, called together by T'ruah: The Rabbinic Call for Human Rights. 200 rabbis from all over the country came together to talk and learn and pray and sing about this singular moment in American history -- and the work we as clergy are called to do for our people and our country.

As part of the conference, the T'ruah leadership organized a march from the Upper West Side to Trump International Hotel off Columbus Circle, to protest the Trump administration policies of closed borders and mass deportation. The result, as you may have read, was perhaps the largest group arrest of rabbis in US history.

And I never would have gotten there if it weren't for Hector Lopez.

You see, before signing on to the march, I had already signed up to lead morning prayers on Shabbos morning at my Bay Area synagogue -- which meant getting up early the next morning to catch a flight to Newark Airport. From there, the only way to arrive on time would be to take a car service.

And that's where Hector comes in.

Hector was my savior, his chariot a silver Toyota RAV4. As we chatted on the way, we began to talk about the conference. Turns out, Hector has a few thoughts about Donald Trump, and the New York where Trump made his name.

Once upon a time, Hector was a doorman at an upscale Upper West Side address. His building was at 290 West End Avenue (he wanted me to tell you), no more than 15 blocks from the site of the conference where he dropped me off. Hector took pride in his good union job, and made sure to remember the needs of the folks who lived in his building.

Hector is Puerto Rican, proud of his family and the sacrifices they've made for this country. ("Do you know how many Puerto Rican soldiers died in World War II? How come we never talked about that in school?") Despite this, it didn't escape Hector's attention that his light skin might have had something to do with the good treatment he enjoyed at work. "The board treated me better because I look white," he told me. Compared to darker-skinned colleagues, in the eyes of his employer, "I upgraded the building."

But even with that comparative advantage, Hector noticed the treatment at his workplace slowly begin to change. He felt less support both from his supervisor and his union. The change in the culture, he couldn't help notice, came at the same time as rumors of shady goings-on began to emerge from Trump Tower. Trump was passing over union workers in favor of local "street thugs." The Trump organization, says Hector, "liked this idea of hiring non-union security guards."

Sure enough, in 2004 a fired elevator operator named Ioan Ghilduta had filed a wrongful termination lawsuit against both Trump and the Local 32BJ labor union. The suit charged that workers at Trump's building had to pay for their positions.

"Sure, all the guys pay the money," Ghilduta said in a 2005 deposition. He described a scheme in which he was required to hand over $1,000 in cash and a gold crucifix in order to secure a position with the company. "It was a common practice when you get the job."

As for Hector, he ultimately felt forced to leave the job he loved. "I was getting harassed by the superintendent, and the union did not defend me properly, or relocate me."

That's how I ended up sitting in the front of a Toyota RAV4, crossing the Lincoln Tunnel, a customer of Hector's Car Service.

And it's how I ended up thinking about Hector when my rabbinic colleagues and I headed for Trump International Hotel. A jumble of thoughts competed for space in my brain as we marched down Broadway, 200 rabbis carrying signs and shouting and singing on a clear February evening. As a marshal, it was my job to do crowd control, keeping my fellow marchers on one side of the sidewalk so that non-protesting pedestrians could pass, blocking taxis so that our group stayed out of danger, steering clear of police officers who warned me to stay out of the road.

I've marched and undergone arrest plenty of times before, so I wasn't experiencing the surge of adrenaline that some of my colleagues would later report. But as we rounded the corner of Central Park West -- as our destination came into focus -- my pulse began to quicken. I had seen the hotel hundreds of times before, but not since the election.

Mixed in with the police detail, I saw other men, men in suits, all assigned to secure this building. How many of them were Trump's private security guards? How many had been selected for their skin color? How many had paid for their positions? How many had forced others to pay for theirs?

And it was at that moment that I knew that, in Trump's America, I was marching for Hector.

If a man like Hector, whose skin was light enough to be seen as an "upgrade" for his building, could still be elbowed out of his livelihood, what did that mean for folks with darker skin?

If a man like Hector, who had a union behind him, could still feel abandoned, what did that mean for those of us with no union representation?

What did it mean for the refugee and the racially-profiled, the undocumented and the underpaid?

What did it mean for America?

In the back of his RAV4, Hector has a sign: "Believe in Good." It's hard these days Hector. But I keep believing. Because my ancestors also spoke with accents. Because my people were slaves in Egypt, and we got free. Because to be a Jew is to believe in redemption, even when it's slow in coming.

But mostly I believe in Good because of the good people I meet. People like you Hector, who refuse to give up, who keep smiling no matter what.

We're in this together, Hector. Thanks for letting me ride with you.