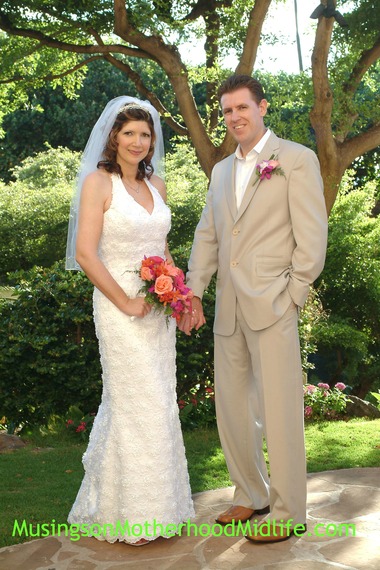 I grew up thinking I'd marry a Jewish man. My mother and her parents had left Poland during the Holocaust and had ended up in Israel, while my father's parents were Orthodox Jews, with my grandfather the clear patriarch of the family. My father had also attended the same Yeshiva that my sister's husband's father had attended. Is it any wonder that I thought I'd follow in those steps?

I think I became a JDate aficionado after exhausting the limited supply of able-bodied Jewish men from my local temple.

Now, the stories I could tell you could boil water! Guys in their 30s living in their parents' basement. Successful businessmen asking for late-night dates. (Um, sorry, but I don't go out at 11 p.m. on a Thursday night just because you think I'm "hot.") And don't get me started on the guys who expected me to schlep to Connecticut or meet them at the train for a cup of coffee (thanks, but I'll pass), or separated married men, or guys who were clearly into shiksas but had signed up on JDate to please their parents. And of course there were the always-entertaining guys who lied about their height. (Yeah, if you have to stand on your tippy toes just to look 5-foot-7-and-a-half me in the eyes, I don't think you are 5-foot-10, dude.)

Maybe it was because in the '90s, with the influx of dating sites like JDate and the more secular Match.com, and eHarmony, it was a smorgasbord of women for men, and they could afford to show bad behavior. (I'm sure that for every time I said no to a late-night date, whether through JDate or some other site, some less-confident gal was saying yes.) And this was before the book that changed the life of every self-respecting East Coast-living gal: The Rules.

The best was the hapless guy who told me his sexual fantasies right before the appetizers arrived. (Let's just say that the oysters weren't so appealing after he told me what he'd like to do with pearls.) He told me he thought I'd be into it because I'm a magazine editor, aka a "communicator."

Back when I was a magazine editor, I penned a dating column and called myself "The Dating Diva," which constantly caused my friends to succumb to paroxysms of uncontrollable laughter. As a guest on Rolanda, Gordon Elliot, America's Talking, and other long-gone-to-that-great-media-green-room-in-the-sky morning shows, I had the opportunity to spout advice to women like, "Make sure that if you volunteer for a nonprofit, get on the party-planning committee so you can meet everyone," and, "Always end a phone call a bit unexpectedly to leave them wanting more." (Apologies if I borrowed a little from Seinfeld.) I also taught relationship classes at the Learning Annex (years before Ramona of The Real Housewives of New York took over that niche) with titles guaranteed to pack a room, such as "Power Dating," or "How to Marry the Man of Your Dreams."

Often, my dates (OK, the stalkery ones) would Google me, and that would make for uncomfortable chatting.

"Are you planning to write or talk about me?" they'd ask.

"Um, maybe," I'd reply. I was no Taylor Swift, but talking about what I did probably wasn't my best opening line.

At any rate, because I was "The Dating Diva" (or despite it), I sure dated a lot. But. Only. Jewish. Men.

Patriarchal Grandpa would say to me, "Why haven't you met a nice Jewish man, Estelle?"

"You need someone tall, because you're tall, and you also need to learn how to cook," he'd advise. "That's why you haven't met a nice Jewish man: You don't cook!"

Maybe it was because of this kind of rhetoric that I was more focused on the religion of the man I was dating than on the man himself. I had to get rid of some strong cultural pressures in order to take the blinders off my eyes so that I could see for myself the man behind the religion.

This brings me to my husband. He's not Jewish, but by the time I met him in 2003, that no longer mattered to me at all.

What's crucial to me is that he is open to exploring and participating in my cultural rituals. (Admittedly, he delights in devouring my mom's Hanukkah latkes.) I love seeing his patrician face bedecked by a yarmulke at one of the myriad bat mitzvahs or Shabbat dinners we have gone to throughout our nearly eight-year marriage.

As for Patriarchal Grandpa, shortly before he passed away, he met my husband, and I think he approved, in his own (nonverbal) way. Here is a paraphrasing of our conversation at the time:

"Are you cooking yet?" he asked.

Patriarchal Grandpa sighed and looked at the guy I was with. "He's your boyfriend?"

Here's what I'd like to tell Patriarchal Grandpa today: "I love you, Grandpa, but although the man I married -- who I'm so glad you met -- is not Jewish, he's smart, kind, successful, and a great husband and father. And you know what else? He can cook!"

How did the man you married or the partner you ended up with differ from who you thought you should choose?

This blog post originally appeared on Musings on Motherhood and Midlife.