A certain beautiful princess once announced to the world there were three people in her marriage. I have to confess something along the same lines. Except one of the three people in our marriage has four legs and a tail.

Being wedded to a man and a cat at the same time requires a level of tact and political astuteness worthy of a Middle East negotiator. In an unconventional set up like ours there's constant potential for hurt and petty jealousies.

For instance, the simple act of watching Homeland night after night is more complicated than it sounds. Our cat, Jonah, knows my thighs are squishier and therefore more comfortable than Philip's. He naturally makes a beeline for me. But then, after Sergeant Brody has committed his fifth act of treachery for the evening, Philip's lap seems achingly vacant. With great diplomacy, Jonah yawns, stretches, and nonchalantly tumbles off my knee. He then leaps on to Philip's lap and repositions himself.

When you have two husbands comparisons are inevitable. Whenever I turn the key in the front door after being out for an hour Jonah gallops toward me as if Cleopatra herself has arrived. His eyes glow in the half light of the hallway as he issues throating meows of jubilation. "You came home! How wonderful!" he meows, waving his tail like a banner. "Don't ever go to the supermarket again! I missed you so badly!"

My other husband, on the other hand, hardly notices I've been out. I have to stand at the bottom of the stairs and yell "Are you there?!" Even then he sometimes forgets to answer. Philip does cook, however. Jonah has minimal interest in the kitchen, apart from the fridge. And strutting over the bench top if it's going to be annoying.

My human husband also refrains from drinking out of flower vases, which I appreciate.

Both spouses adore our daughter Lydia, who stars in my new book Cats and Daughters. When Lydia announced she was off to war-torn Sri Lanka to become a Buddhist nun, Philip lost what was left of his hair. Jonah, on the other hand, was cooler than a can of tuna. He waited patiently beside the altar she'd created in her bedroom to join her for hours of meditation.

Nothing helps writer's block more than having two husbands. On the days I invent excuses not to work, Philip pours mugs of tea while I wander the house finding toilets to scrub. Jonah refuses to endure such nonsense. He trails after me, meowing persistently until I return to my computer. He leaps on my lap and anchors me to the chair. My feline spouse then drifts into sleep so profound I daren't wake him until I've produced several hundred words.

I'm lucky neither male objects to being written about, though Philip sometimes rolls his eyes when I show him my version of one of our disagreements. Jonah takes no interest in how he's portrayed in print, though he enjoys posing for visiting photographers.

Fitting two husbands in one bed requires the skill of a jigsaw puzzle expert. I have woken some mornings with a body folded like an origami swan. When Jonah was first allowed to sleep with us he curled discreetly near our feet. With each phase of the Moon, he gradually snuggled north to rest between our knees, and then the small of our backs. The nights he has tried to wriggle between the sheets with his head on our pillows have resulted in protest, and his return to our feet to start another cycle.

Sad to say, both husbands are early risers. One goes to the gym. The other strides repeatedly across my chest if I'm not awake by 7am.

I never have to dress up and wear makeup for Jonah. He doesn't care if my bum looks like the rear end of a space shuttle in this. Or if a sinister looking vegetable is stuck between my teeth, my moustache needs waxing and my breath stinks. His love's unconditional like that.

In other areas my human husband shines. He takes me to the opera (Jonah can't stand high notes). Philip's far better at remembering my birthday and always knows where I left my glasses. I've never had to stop him murdering a bird. Or growl at him for licking inappropriate body parts in front of guests.

When I vowed to care for Philip in sickness and in health, I didn't have to swear anything about emptying his litter box. This factor is decidedly in his favour.

Whenever I'm feeling under the weather my husbands are at their best. One goes to the pharmacy while the other nestles around whichever part of me is feeling sore and emits a constant, loving purr.

Now that Lydia and I are about to leave Australia to promote Cats and Daughters in the US, it's impossible to say which husband I'll miss more - the one who rearranges plates in the dishwasher after I've stacked it, or he who cleans his teeth on the edge of my iPad.

PHOTO GALLERY
Married To My Cat
Download
Calling all HuffPost superfans!
Sign up for membership to become a founding member and help shape HuffPost's next chapter
Join HuffPost

I Married My Cat...And My Husband!
Married To My Cat 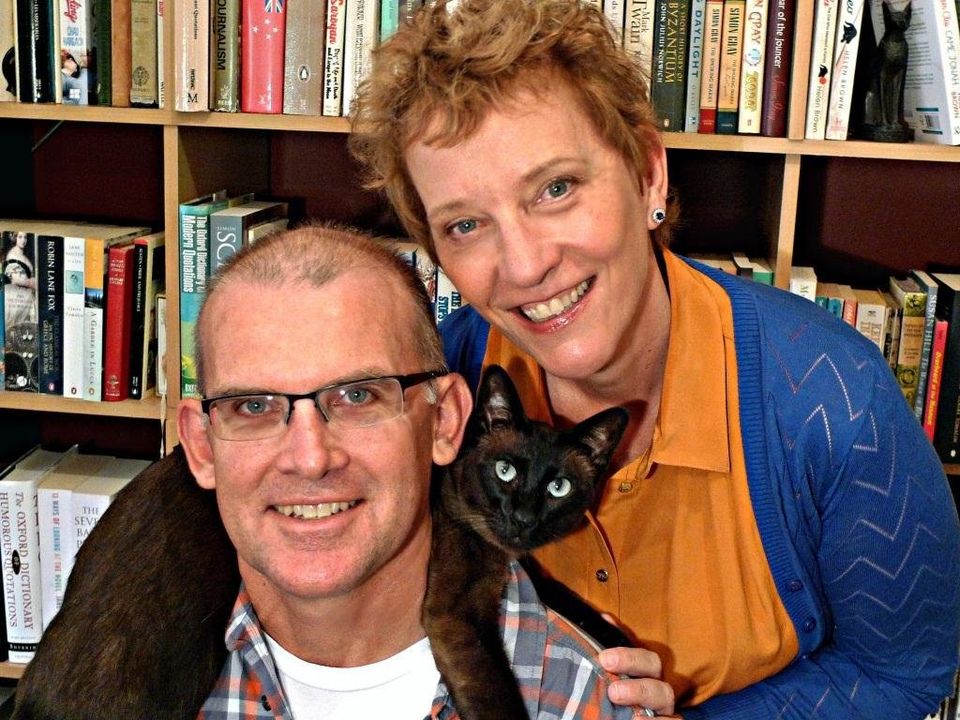