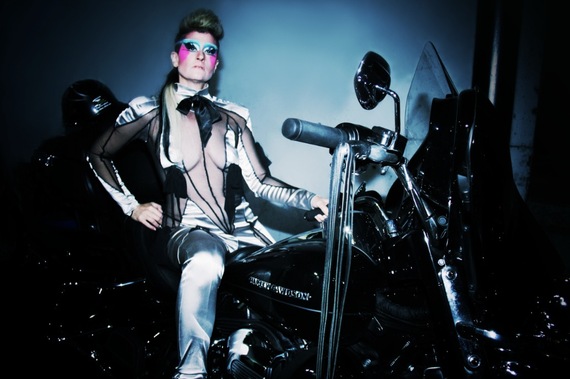 I have entire periods of my life that are defined solely by the music I was listening to at the time, and the 2000-2003 time period -- a time when I was beginning my own journey into the music industry -- largely belongs to a person named Merrill Nisker, who you probably know as Peaches.

Like many of you out there, from the very first moment I heard The Teaches of Peaches, I was hooked. With the release of her first new album in six years, Rub, Peaches is back just as you remember her: Super. Fucking. Cool.

I caught up with Merrill backstage in Portland and we talked about the new record, what life is like 15 years after the release of her debut, her recent adventures with Yoko Ono, Kim Gordon, Margaret Cho, Christeene Vale and more.

Watch the "Light In Places" video, then read our chat and check out photos by Disclosure Images from the Portland stop on the Peaches "Rub" Tour below!

Logan Lynn: How has becoming Peaches over the past 15 years, since your first record, The Teaches of Peaches, changed your life? Did you ever imagine that record would do what it has done?

Peaches: No, I actually never imagined I would have, and I put in quotations "a career" in music, whatsoever so, yeah. That already exceeded any dream I had by, you know, playing to an audience of more than 30 people in the first place. The biggest change is like when you've never made an album and people don't know who you are and then people want to know who you are and they want to meet you, or people that you respect, actually want to talk to you one on one. Such an incredible feeling.

Lynn: Yeah, if I were to just look at your last year, you've collaborated with Kim Gordon (of Sonic Youth) and Margaret Cho, certainly both two of my own heroes.

Lynn: That must be such a trip. 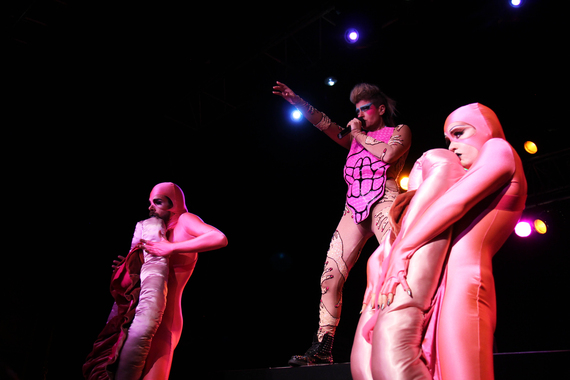 Peaches: I think with Margaret and I, it was kind of a mutual thing. That was a dream team from the beginning. With Kim, you know, I played at festivals with Sonic Youth and things like that. It's just in the past couple of years since I have gotten to have you know, big conversations with Kim and things like that and then there's Yoko Ono, where you cannot have access to that person if you're not introduced -- and then here she is asking me to do her most seminal performance piece. It's incredible. I grew up with Lou Reed and played a festival with him and nobody even knew who I was and he had a team around him. I started walking towards him to say hi and they kind of closed off, like "you're not allowed to come in." You're in front of like a big human curtain. You realize you always have to be appreciative of them, of the privilege you have when you have access to these people that you know and love, and also realize that they're humans and they need to protect themselves.

Lynn: Totally. I would imagine being on the other side of that to a certain extent now has given you a different view of what that whole experience is even like, right? 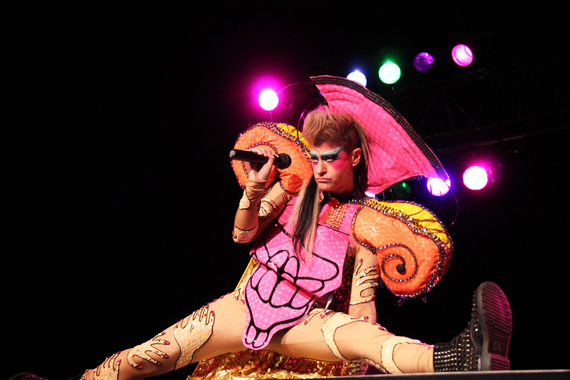 Lynn: How much of Peaches is you versus being a character?

Peaches: I really don't call Peaches a character. It's me on stage, which means it's an exemplified version of myself. When we're talking one on one, there's no reason for me to... you know... I'm adjusting myself.

Lynn: That makes a lot of sense. And you've joined forces with my beloved drag terrorist creature friend Christeene for this tour! How did the two of you first get connected?

Peaches: Mmm-hmm. I don't even know. It just all rolls into one after a while.

Lynn: You're both all kinds of strange magic, and your "Rub" show tonight was incredible. You walked on the crowd, performed in this giant condom, and had life-sized dancing vaginas on stage -- is that kind of what people can expect from the tour in general? 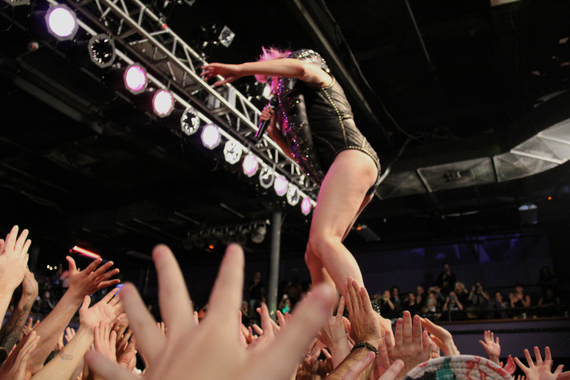 Lynn: One of the things that stands out for me about you and your performances is the costuming. Do you put these looks together yourself or is that a collaborative process?

Peaches: It's a collaborative process.

Lynn: The outfit changes are definitely part of the show.

Peaches: And I have a policy of not leaving the stage to change...

Lynn: Clearly! I think of you as being something of a sexual pioneer in the music industry. Was that your intention initially or has that just happened accidentally? Has that helped your trajectory in the industry?

Peaches: I just wanted to say things directly, how I wanted to say them. I don't think it's helped much with my trajectory until now. I think this is the first time that people are like "you're important. We understand what you're saying." 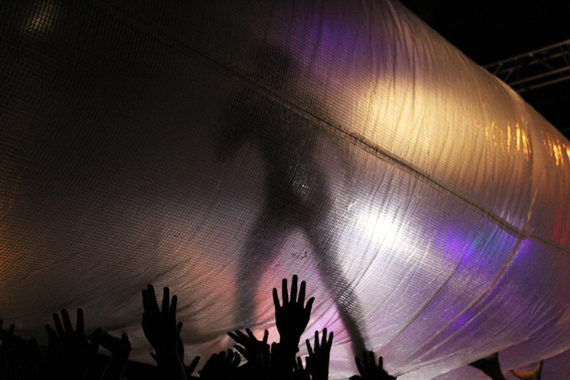 Peaches: I'm not even saying these ideals will last in the mainstream forever because I know it's a very fickle and very trend-oriented trajectory in itself...

Lynn: It must be kind of relieving to see the culture is changing as well.

Peaches: I mean, it's incredible on many levels. When I started to make this kind of electronic punk music in 2000, that was very weird.

Peaches: Musically it was very influential in terms of like, everything was either extremely over produced or extremely rock oriented. I think that I brought rock people into dance and dance people into understanding rock. That was a big deal for me. I heard it in lots of mainstream music and I know all those people listen to my albums. I'm not saying that they're good or anything, I'm just saying "wow, I can hear the influence." I would meet those people and they would be like "yeah, we listen to your albums." You have Christina Aguilera or Brittany Spears or Pink and Avril Lavine all coming out when they go from girl to woman, saying they like Peaches, you know. They have like these seminal albums. Each one of them has that seminal album where they turned a little less Mickey Mouse and more sexual and they all site me for that. 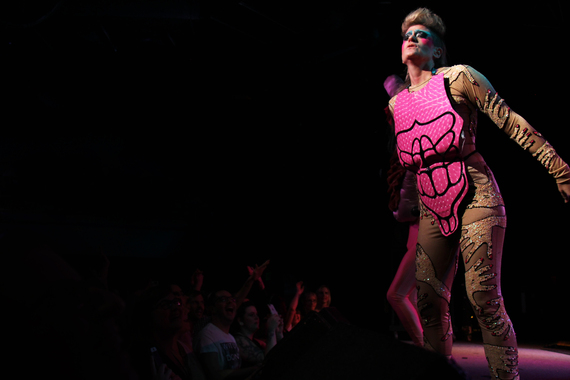 Lynn: That's so awesome. I thought it was cool how mixed the crowd was at the Portland show. There were people my age who have been with you since the beginning and then there were all these kids, like so excited. It just felt to me like you've now inspired a whole new generation of folks, which I think speaks volumes about the importance of what you are doing.

Lynn: Mmm-hmm. It was a very eclectic mix.

Peaches: Yeah, and that's what I love about it. I remember when I was opening for Marilyn Manson, I actually played in Portland that night, and there was a bartender who was like, "I've never heard you and your crowds are so nice and I had so much fun. You're the best performer I've ever seen and you changed my ideas." You know, he's just like a straight bartender. He was so blown away.

Lynn: Every time I see you, I feel that way afterward. Peaches afterglow. 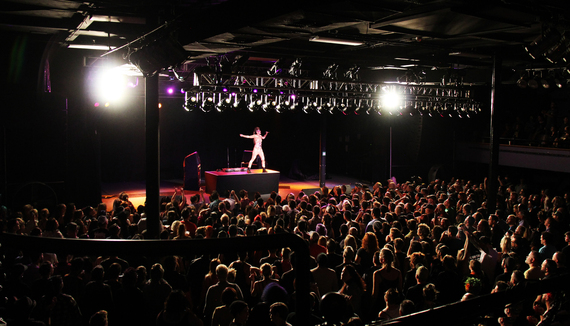 Lynn: Ok, I know you are trying to catch a plane to Europe for tour, so I'll just ask one last question. What's your favorite Peaches song?

Lynn: Oh my favorite Peaches song... well, I obviously first fell in love with you when I heard "Fuck The Pain Away..."

Lynn: I also love "I Feel Cream" and the whole "Fatherfucker" record. You know, I've been around for a while, and each time you put something out into the world, I feel like you're expanding not just your own freedom, but also this freedom for all of us to be ourselves, to get filthy and dance it off together. It's seriously rad.

Peaches: Thank you so much. I appreciate that.

Lynn: No, thank you. It was fun getting to spend some time with you. Peaches forever! 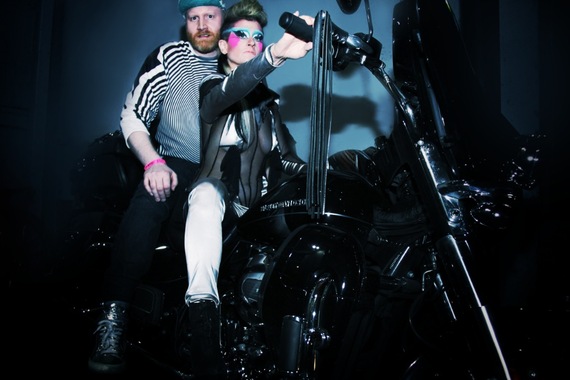 (Pro Tip: When Peaches looks at you and says "Get on my baby seat," just do it.)