I didn't read comic books as a child. It seemed all they had to offer was a lot of aggression, which was scary to me back then. I was wrong, of course. Fighting for justice was and still is what superheroes represent.

Despite not really knowing the source material, I did love watching Saturday morning cartoons, especially Super Friends, which featured Superman, Batman and Robin, Wonder Woman, and Aquaman. Their aggression was trumped by their teamwork (and their skintight outfits). 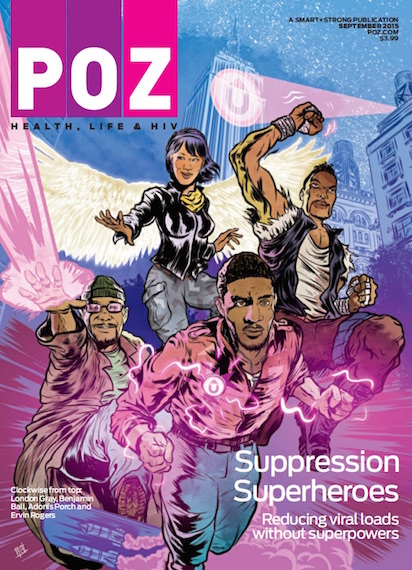 The Undetectables -- a new program from New York City's Housing Works that helps participants reduce their viral loads -- taps into that superhero spirit. The program uses a comic book series to educate participants about HIV treatment adherence. That series was the inspiration for our cover.

The Undetectables comic books include fictional characters, but our cover and the accompanying feature article include real participants in the program. Click here to read how London Gray, Benjamin Ball, Adonis Porch and Ervin Rogers are lowering their viral loads without superpowers.

For those of us living with HIV, having an undetectable viral load is optimal, but it does not cure the virus. However, for people who are living with both HIV and hepatitis C virus (HCV), curing their hep C is now not only possible, but also easier than ever before. Click here to read about HCV treatment.

The U.S. Centers for Disease Control and Prevention recommends that everyone born between 1945 and 1965 get tested for hep C. That's yet another health-related concern that all of us living with HIV need to consider as we get older. Thankfully, more and more of us are indeed living longer.

As of this year, it's estimated that more than half of people living with HIV in the United States are older than 50. The challenges faced by all people as they get older are increasingly affecting HIV-positive people. We also face unique challenges with aging that HIV-negative folks do not.

The Graying of AIDS project reflects all of the complexity involved in aging with HIV. The project includes photos, videos and interviews, as well as traveling exhibitions and campaigns, spotlighting older people living with the virus. Click here to read about their current and upcoming efforts.

Living long-term with HIV is heroic all by itself. Overcoming related health problems is more than enough of a battle, let alone the stigma and discrimination that often surface. However, those who give above and beyond what's expected are deserving of special praise. I do hope we can all agree on that.

Ashley Murphy is one such person. She's only 17 years old, but she was born with HIV so that already makes her a long-term survivor. She was given only weeks to live, but now she gives motivational speeches. Click here to be inspired by her story.

US Presidential Election 2020
Breaking news, analysis and the latest polls on the presidential race from HuffPost’s politics team
See More
Voting Made Easy
Register to vote and apply for an absentee ballot today
Register now
More:
AIDSHIVhealthy livinghepatitis c aging
Newsletter Sign Up
The essential guide to taking care of your mind and body
Subscribe to HuffPost’s wellness email
Successfully Subscribed!
Wellness delivered to your inbox