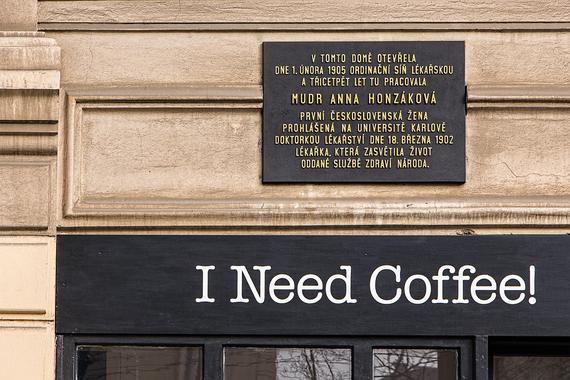 "I Need Coffee" is a monthly column on Huffington Post Books. INC (the initialism is deliberate) covers all sorts of writing topics, with an eye toward how to make a living writing. INC's audience includes both authors and aspiring authors, and authors who are both mainstream and independent.

Note: A version of this column first appeared in Underground Book Reviews, an online magazine run by indie and small-press authors who are passionate about writing.

If you look closely at that list you'll see that, really, all of the items are facets of the same implacable stone: "I feel stuck in a place, and I can't break out."

There are other metaphors for "funk"--some people use the word "rut." Others use the word "plateau." You've plateaued when you've ceased an upward trajectory and leveled out, and now you're doing the same old stuff over and over again. You can plateau in sports, for example, when you stop getting better at your chosen skill. You can plateau in your writing career, too, when you feel like you're writing the same things for the same people and nothing new will ever happen for you.

Funk, rut, plateau, whatever you want to call it: If you've hit one of those things, it's a terrible feeling. And calling where you are a "funk," "rut," or "plateau" doesn't help. Those words have negative connotations here. As writers, we know that words matter.

So I decided I needed a different metaphor for thinking about this kind of writing space, a metaphor that's less negative than, say, "rut." I settled on the phrase "pivot point."

A pivot point, at its most basic, is the center of any rotational system.

In basketball, you plant your pivot foot so you can move while not getting called for a traveling violation. That's a good thing.

When you are drawing with an old-fashioned compass, you firmly plant the sharp tip as your pivot point, and then you rotate the clamped pencil around it to create a perfect circle. That's a good thing, too, so long as you didn't accidentally stab yourself with the compass point.

A train engine on a turntable rotates on a central pivot point, allowing something immensely heavy to change direction and head off another way. That's kind of amazing, actually.

Examples of pivot points abound. The examples are important because I really want to stop thinking about funks, ruts, and plateaus. I want to embrace these moments as moments of possibility rather than impossibility. (I sound very new-agey and unlike my ordinary practical self, but what I'm suggesting is very practical. Please bear with me.)

At a pivot point, you do, indeed, stop moving forward. But you also have a multitude of possibilities around you. You pause in your forward progress, and you look around, taking in the different paths, and then pick a new one.

The hardest part of being in a pivot point is accepting that the lack of forward motion can be a good thing. A pause to look around, to get your bearings, is a periodic necessity. You have time to ask important questions: Am I making the best choices for my writing career? Where do I want to go next? What things are in my way, and how can I work around those things? Pivot points give you time for these considerations.

So if you're in a pivot point, what sorts of considerations should you be thinking about? Here are just a few of them:

(1) Look at your writing output. (As I mentioned in the first column in this series, I mean "writing" broadly construed.) Are you working on what you want to be working on? Look at the new projects you have on the horizon. Look at the excitement that you feel or don't feel about what you are doing. Ask yourself what you are writing for.

(2) Look at your finances. Are you making enough money? Are there choices that you need to be making with your writing career in order to make more money? Do you need to ask for a raise? Spoiler: You probably need to ask for a raise. I've only done it once, and I got a resounding yes. I need to do it again, and soon. It's hard to believe how rarely writers raise their rates.

(3) Consider new writing ventures. Now is the time to push out of your comfort zone a little bit. You're safe where you are. You have some stability. So now, reach a little higher with your work. Submit to more highfalutin' magazines. Heck, just submit to new magazines. Pitch to new clients on a regular basis. Whatever your writing work is, stretch yourself a little. Do it now. If you feel stuck, you might be the one keeping you in that stuck place, and you might not even realize it. Give yourself a regular challenge: one new pitch or query once a week, for example. See if you can pull it off. Challenges help you form new good habits.

In short: When you find yourself in a funk, rut, or plateau, try to reframe your thinking. You're not in a rut, but rather in a place of possibilities. You're in a pivot point. So pause. Look around you. Take in your situation. Then, once you have your bearings, move forward again.

To sign up for Katie's monthly letter, Writing Isn't Sexy, and get free books and writing tips, click here: bit.ly/pryalnews.