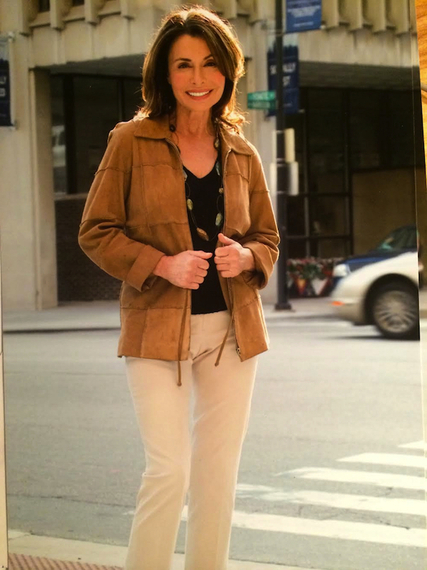 Photo from the collection of Irene Michaels.

In September the world lost a truly exceptional person, Joan Rivers. She shared so many things with us. She didn't just do something -- she became it.

She was comedy, she was fashion, she was television. Joan Rivers was in one word: ENTERTAINMENT!!! She was the consummate pioneer in every endeavor she attempted.

I began to think about several people out there who do exceptional things on a daily basis like Joan and wanted to do something to highlight their lives, and that's how I On Exceptional Living came to be.

During this series I will feature the people that I feel are the true trailblazers of our era.

The gorgeous brunette was born in Chicago and raised in Beverly Hills, California. Nikki Haskell's amazing ability to seize the moment has made her a true pioneer and an entrepreneur. She is a champion horseback rider, the inventor of the Star Cruncher exercise system, a bestselling author of the Star Diet, an accomplished artist, and a film producer. When Nikki moved to New York, there were no women on Wall Street, and she became one of the first five female stockbrokers in the world. After ten years on Wall Street, Nikki changed her focus to the entertainment industry, which led her to create one of the most successful cable shows of all time, The Nikki Haskell Show. The popularity and success of the show resulted in a trail-blazing article on the front page of The Wall Street Journal. The Nikki Haskell Show captured the glamour and excitement of the 80's, shooting 300 half-hour episodes from all over the world. Nikki is using the library of her extraordinary footage to create a talk reality show, Flashback to the Future, which will relive memorable nostalgic interviews of icons such as Liza Minnelli from The Cannes Film Festival, Joan Collins from France, and First Lady Imelda Marcos. Never seen before footage of Tony Curtis, Steve Rubell, Sophia Loren and James Mason. Flashback to the Future will take you back to the memorable days of the 80's. Nikki will re-interview the stars today in their homes, restaurants and yachts. Flashback to the Future captures Nikki Haskell's exceptional life, taking her face to face with the rich, the famous and the outrageous. Her fearless nature, positive attitude and unique sense of humor helped her through many challenging times. Never under estimate her, she is a force to be reckoned with.

Everyone knows Nikki knows everyone...now it's our turn to get to know Nikki.

Mavis Staples' deep, sultry voice is a celebrated feature of American R&B and gospel music, and she is best known for hits such as "Respect Yourself" and "I'll Take You There." In addition to a decades-long career with both her family as the Staple Singers and as a solo act, Mavis Staples was notable civil rights activist, traveling with Dr. Martin Luther King Jr. and performing some of the movement's most powerful anthems. For a time, the Staple Singers dedicated themselves solely to writing such songs, and have since been inducted into the Rock and Roll Hall of Fame and received the Grammy Lifetime Achievement Award.

Cindy Crawford is an American supermodel whose success in modeling has brought her international acclaim and led to roles in television and film, as well as the opportunity to act as a spokesperson for various organizations.

Her fashionable furniture line, Cindy Crawford Home, has grown so successful that the multi-talented model now has the chance to give back to Chicago, the city that kick-started her career. Crawford has partnered with Art Van Furniture over the past 7 years to bring affordable style into the homes of thousands, but this year she has announced that she's taking on a new role: Art Van's Charity Challenge Ambassador. As part of an ambitious philanthropic mission, she will be featured in PSAs and raise funds for local charities in the region. Over last five years, the Challenge has donated more than $6 million in grants to 205 local charities and raised many millions more. On October 29, 2014, Crawford appeared at Art Van's A Shining Star Event in Chicago to accept her new position -- where IOnTheScene had the opportunity to sit down and catch up with Cindy (stay tuned for more).

Robert C. Merton is a Nobel laureate in economics and the School of Management Distinguished Professor of Finance at the MIT Sloan School of Management. His research has worldwide recognition and impact. He is perhaps most well-known for his role in developing the Black-Scholes-Merton model of continuous-time option pricing.

Catharine Hamilton is a Texas native with a love of French art and culture that inspired the creation in 1998 of American Friends of Versailles, an organization dedicated to preserving the landmark's exquisite beauty, particularly through the restoration the Trois Fontaines Bosquet and the Pavillon Frais at Versailles. Catharine has been extensively involved in raising the millions needed to reinvigorate the palace gardens and protect the delicate history of the grounds and palace itself.

Marilyn Hoffman is the woman you speak to when you are ready to upgrade to a $30 million mansion or an expansive Western ranch. Based in Dallas, Texas, Marilyn's non-franchised realty firm, Hoffman International Properties Inc., has listings just about anywhere in the world you'd like to live. Her success as a leading realtor of luxury properties is partially the result of her attention to the minute details and history of each estate and her impressive network of clients that she has carefully cultivated for over decades. She utilizes a "clients first" philosophy that keeps both buyers and sellers satisfied and keeps Marilyn a busy professional.

Check back in December for I On Exceptional Living's first feature about Nikki Haskell and her exciting new project, Flashback to the Future.