Nikki Haskell is an exceptional woman! 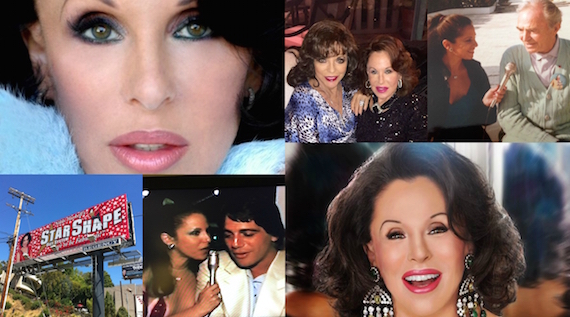 Photos from the collection of Nikki Haskell.

Her skirts are short; her boyfriends are young; her fingernails are long; and her energy is endless. Nikki is always overdressed and ready to go. Her motto is "Never give in. Never give up. And never take 'no' for an answer." If Nikki can't do it in high heels; she's not interested. Her fearless nature, positive attitude, and unique sense of humor have helped her through several challenging times, and she is always charging toward victory. Never under estimate her -- she is a force to be reckoned with. Everyone knows "Nikki knows everyone." And now it's our turn to get to know Nikki.

This giant personality was formally educated in both art and business and is hugely accomplished in both. Not only has she won awards at prestigious shows such as the Brussels Art Fair, Nikki was named Stockbroker of the Year by Drexel Burnham Lambert after becoming one of the first women to prove a successful trader on Wall Street. Over the decades Nikki has worn many hats: artist, socialite, businesswoman, entertainer, entrepreneur--and throughout her extensive and varied career, the vivacious brunette has remained faithfully Nikki. Her endeavors have been chronicled in such publications as The New York Times, People, Newsweek, The New York Observer, The Los Angeles Times, and on the cover of The Wall Street Journal, just to name a few.

The wider public knows her best as host and producer of The Nikki Haskell Show, which aired in the '80s with more than 300 episodes that captured the glamour and excitement of the 1980s, bringing its audience face to face with fashion, beauty, and power while providing the viewer his or her own window into the world of the stars. Nikki was the only person to ever shoot a television show from the world famous Studio 54, where she often hosted many parties for celebrity friends such as Michael Jackson. She also traveled the world over to shoot on location and bring the exotic right into our living rooms. Nikki has covered Carnival in Rio (where she danced high atop a float in the Samba School Parade wearing a massive headdress), the Cannes Film Festivals, The Grand Prix in Monte Carlo, The Hell's Angels premiere, and much more.

Considered a forerunner to shows like Entertainment Tonight and Lifestyles of the Rich and Famous, Nikki's eponymous show featured interviews with several dozen celebrities and international figures including Ferdinand Marcos, Imelda Marcos, Liza Minnelli, Tony Bennett and the incomparable Joan Collins. She was the first to interview Donald Trump and his first wife Ivana, and was the last to interview actor Peter Sellers before he died. Further, hers was one of the first programs ever to cover the fashion shows of Carolina Herrera, Bill Blass, Oscar de la Renta, and Calvin Klein.

Now, Nikki is returning to television with a new project, Flashback to the Future, which will again thrust her extraordinary, provocative life to the public stage and bring her face to face with the rich and famous once more. She will use her library of extraordinary footage to relive memorable interviews of iconic figures such as Liza Minnelli, Michael Caine in Rio, Joan Collins in France, Clive Davis at Madison Square Garden, George Hamilton from the Philippine Film Festival with President and First Lady Imelda Marcos. She will also release never before seen footage of Tony Curtis, Steve Rubell, Sophia Loren and James Mason. Additionally, she will again interview these stars today in their homes, at their restaurants, and on their yachts. We'll also see all the young, happening stars currently intertwined in Nikki's remarkable life.

Produced by Trium Entertainment, Flashback to the Future will take on a talk/reality show format, making it truly two shows in one. We will enjoy a behind the scenes look at Nikki's fast-paced, exciting life, full of elegant dinners, celebrity parties, eccentric friends, and more. Then she'll switch gears to put the focus back on the stars we love, visiting past interviews and conducting new ones.

I recently had the pleasure of speaking with Eric Day, managing partner for Trium, and Ronak Kordestani, who serves as head of development. I wanted to ask them more about this exciting project and how it came about.

"A mutual friend introduced me to Nikki," Kordestani explained. "After just one drink, I knew she needed to be back on television. She had some great ideas that leveraged the great access she had (and frankly still has!). We used that as a foundation and built upon it create a format that feels fresh and unlike anything else currently in the celebrity landscape."

Eric continued, "Everywhere you look from fashion to music, the late 70's and early 80's are back en vogue. We think the time is perfect to take Nikki, who was an icon from that era, and introduce her to a new generation of future fans."

Nikki once said that if she had a camera small enough she would film all the time. As carting a camera crew is not always feasible, Nikki now takes advantage of the technology of today, including her iPhone6, to create her well-received, day-to-day video blog on Facebook.

Beautiful, driven, successful, indefatigable, accomplished, fearless, fun, positive are all adjectives that certainly describe Nikki Haskell. However, in my opinion, there is one word that encompasses all that Nikki is: TIMELESS!

If you think you've seen it all, you haven't seen anything yet.

Fasten your jet-set seatbelts: It's time for Flashback to the Future!

Check back in January for another I On Exceptional Living featured life.