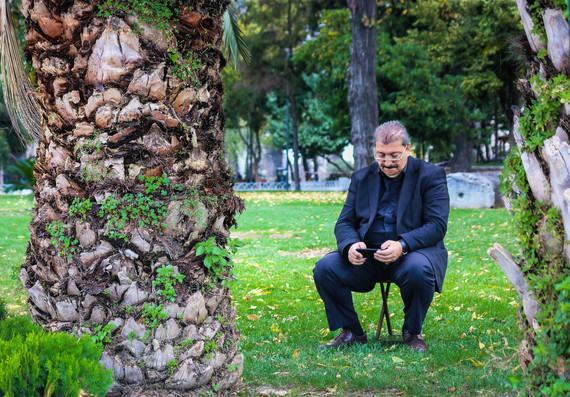 I just had a realization. Well, maybe "realization" is too fancy a word. Make that more of an insight. Nah... "insight" sounds just a tad too self-congratulatory. For want of a better word, let's call my little moment a semi-embarrassing wake up call -- the kind of learning experience I claim is good for me, but don't really want to have. It's a moment I've had many times before, but not until two days ago, in Newark Airport, as I was exiting Flight #1140 from LAX, did the whole thing clarify for me.

There I was, merrily walking through Terminal "C", glad to be heading home after a three-day business trip, when I reached into my pocket for my trusty iphone only to discover it wasn't there. My iphone wasn't there! Gone. It was gone. My iphone was gone! Gone, as in missing. Gone, as in not in my pocket. Gone, as in WHERE IN THE WORLD WAS MY FREAKING IPHONE with all those apps and appointments and contacts?

No, I wasn't in Kansas anymore. Neither was I in New Jersey. I was in a sudden state of panic -- Woody Allen on steroids -- my former digital life flashing before my eyes.

Where just a minute ago I was a conscious human being firmly rooted in a deep experience of inner peace, now I was wildly slapping every pocket I could find like some kind of poster child for Tourette's Syndrome

This ridiculous outtake from a movie that will never be made took less than ten seconds (having blissfully located my iphone in my suit jacket pocket), but those ten seconds were extremely revealing -- me (Mr. Been-On-The-Spiritual-Path-For-45-Years) having been so easily discombobulated by a mobile phone missing for such a pitifully short amount of time. Which, I guess, was a good thing -- as it popped, once again, the shiny bubble of my own questionable self-image.

My little ten-second airport freakout reminds me of that classic Zen story of the young monk who, after ten years of meditation in a mountain monastery, was invited by his Master to give the morning talk at the local village temple.

The young monk's discourse was impeccable that day, his Master astounded by his protege's ability to quote from the most esoteric of Zen doctrine. But when the talk was over and it was time to begin his trek back up the mountain, the monk could not find his sandals. Apparently, in his excitement, he had completely forgotten where he had put them.

Unsmiling, his Master shot him a severe glance and pointed to the mountain. "Ten more years, my friend. Ten more years."

And that's exactly how long it took the sandal-challenged monk to be asked again to give the morning talk at the village temple. The good news? On that glorious day, the monk remembered exactly where he put his sandals.

Mitch Ditkoff is the Co-Founder and President of Idea Champions, an innovation consultancy headquartered in Woodstock, NY. He once lived as a modern day monk for five years, but never lost his sandals. He didn't have any.