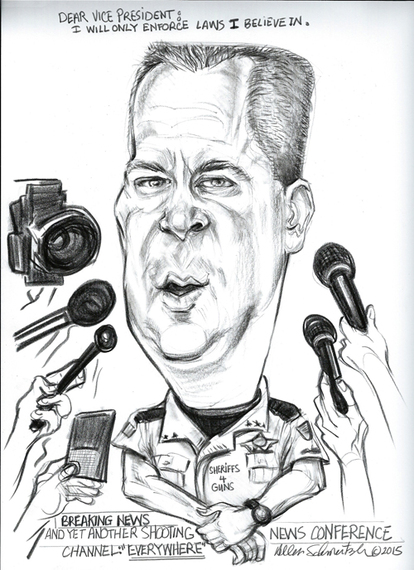 Ideas, beliefs and actions have always been more inherently dangerous than inert firearms. But guns in action are dangerous, too often deadly and never benign. Guns can reside in museums or family collections as historic, revered, artistic and seductive tools that generate wonderment, respect, fear, even horror, and serve as a reminder of human ingenuity and potential for evil. They can sport a coveted rear truck window view, racked, loaded and be one's best companion. They can be hidden and or openly displayed on one's body. Today, the right of gun ownership and use continues to be in flux, but guns are constitutional and totally embedded in the American psyche. Guns are like money, there is plenty to go around, with about 300 million in America, but there is a distribution crisis of who has them and how they use them.

As of late, guns have become weapons of choice for unhinged disenfranchised males to splatter self-hate on mass innocents. As President Obama so correctly pointed out, mass killings and every aspect of these events have become routine. So routine, that it has become fashionable for presidential hopefuls to label the latest horrific slaughter as " stuff happens," and locals of the violated community predictably saying " It's not supposed to happen here." Well, here is everywhere, and the latest everywhere is Roseburg, Oregon. However, despite the allure to join in on the aftermath "routine" discussion, there is a subplot of grave importance that surfaced from Roseburg that is also becoming "routine" in our nation. This needs to be called out.

Take a deep breath of reprieve because it is not of Second Amendment stuff, but the one that precedes it. Douglas County Sheriff, John Hanlin, is the officer in charge of the Umpqua Community College mass execution. His stepping into the national media's obsession of reporting everything and on everyone, uncovered a letter the Sheriff wrote two years ago to Vice President Joe Biden.

In the letter, an emboldened, defiant, and lawless Sheriff Hanlin declared his opposition to any gun control legislation and his commitment as sheriff to disobey any such laws. Simply stated, the sheriff went on record saying he would break the law by ignoring the law, because that law violated his First Amendment personal beliefs. Sheriff Hanlin's boldness about his pre-eminent entitlement is a gross and perverse interpretation of his constitutional protection under the First Amendment, giving him the freedom to express and associate. Stating one's opposition to gun legislation is protected, but stating one's position to act in opposition is not.

Sheriff Hanlin is playing the same hand as the Kentucky County Clerk, Kim Davis, who refused to accept the law regarding issuing same-sex marriage licenses. She claimed religious beliefs gave her the right to an exception. The sheriff must be thinking the First Amendment gives him the exception to protect his absolutist interpretation of the Second Amendment. There can be no law, no society, no community, no team, no military, no educational system, and no future of good fortune when individuals expect personal exemptions.

When did it become routine for folks elected or appointed to pledge allegiance to their own beliefs over the public they are sworn to and paid by to serve? When did it become routine to take one's private beliefs defiantly into the professional work place by acting as though doing so was a constitutional protection to be discriminating? When did these public employees become the " decider? "

I universally and vehemently applaud citizens advocating their positions as citizens. But when people under the color of the law and in the public's trust declare they will break with the law, it is dangerous, undermining, divisive, and unacceptable. Such behavior must be sanctioned. Folks need to be removed from their position, or resign, and encouraged to find the sort of work that honors their beliefs. When did the center of gravity of "I pledge allegiance to" implode and morph into this routine of "I pledge allegiance to me? " More importantly, how do we move our country to a more civilized cooperative with way less destructive confrontational aggressiveness?

award winning artist who writes and caricatures interpretations of the temper of the times.