These are just a few of the responses I received when I proposed to my boyfriend last April. Maybe I was expecting a few "congratulations" here and there, but I wasn't expecting so many people to assume it was all a joke. After all, no one would think to ask a man if that proposal he put so much time and effort into was just for laughs. Is a woman proposing to a man so hilariously misguided that it could only ever be a prank?

Not so long ago, I didn't even want an engagement. The cultural production, the drama, and the fanfare weren't things that I thought I would enjoy, particularly when I didn't like grandiose weddings, I wasn't going to change my name, and I didn't want to make a fuss. (If you want to do or have all of those things, I am not criticizing you.) My partner and I agreed to not have an engagement at all and just to get quietly married whenever that day came.

But when we started planning his visit to come see me in Europe over my grad-school spring break, the perfect proposal idea hit me. Suddenly, I wanted to propose to him but felt somewhat silly about it after adamantly stating my views that I did not want an engagement.

To give a little background, Tim and I first met at a little Irish pub in the American city we were both living in at the time. Both of us are massive beer aficionados. We love finding new beers for each other to try, visiting breweries, and making up names for all the beers we're going to brew some day. All of this prompted my proposal idea, which was to fly him to Ireland and ask him to marry me in a lovely little craft beer pub in a residential area of Dublin with a pint glass I had had made.

The outside pint glass would say, "Tim, after you finish this pint, I'm going to ask you a question..." while the bottom of the inside which would show after the pint was all gone would read "...will you marry me?"

I was excited about coming up with a proposal that combined all of his favorite things (beer, travel, me -- not in that order), so I decided to bring up the topic of engagement again. I assured him that I wouldn't spring anything over-the-top and embarrassing on him, so he said yes. Off I went with my planning.

A local glass-etcher near where I lived in England custom-made the pint glass for me, and it turned out perfect. When the moment did come, I nervously ordered us a few pints before I had the courage to fetch the glass out of my handbag and go downstairs to meekly ask the bartender to pour a pint into it. He looked skeptical but did as I asked.

When I came back upstairs with the pint, I giddily sat there until Tim had drunk enough of it to read the words on the side of the glass. Actually, I impatiently chugged half of the porter until he could read the words. He said, "of course."

I'm still not sure why I decided to propose when we still weren't going to have an actual wedding (just a private ceremony with family who already knew of our decision). Part of me just wanted to make a grand gesture to someone I loved, and why should men have all the fun at that? I know there are other ways to make grand gestures, but this one just felt right. Of course, several concerned family members were decidedly worried that I was going to emasculate Tim with my boldness. As if emasculation weren't a ridiculous concept in the first place since people aren't worried about "e-feminating" a woman.

In all honesty, I expected people to act like Tim had done me some great act of service by "allowing" me to propose, but guess what? No one did. Female friends who admitted they would never want to be the one to propose in their own relationships were still delighted that I had made a choice that suited me and that was right for my relationship. Sure, the April Fools queries annoyed me, but they didn't really matter.

Overall, it was such a smooth and happy experience that I would do it again if I could. After all, we can always use another pint glass. 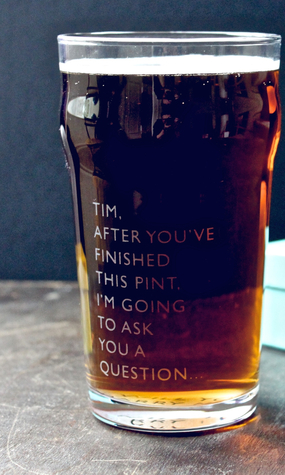 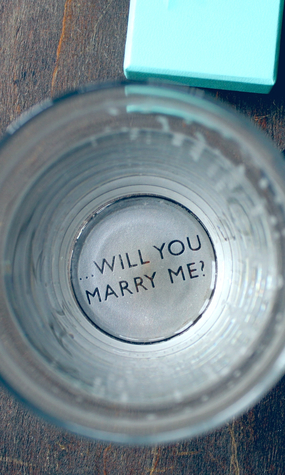