What it feels like to run with the bulls. And how it made me a better man.

"Nobody ever lives their life all the way up, except bull-fighters." - Hemingway

There are 800 meters of cobblestone streets in Spain that host the world's most well-known footrace for fools. If you've ever wondered why anyone in their right mind would run with the bulls -- or maybe some primal yop from inside your loins shows you know why -- and you simply want to know what it feels like... I will be your fool.

The air is thick with increasing soberness at 7:55 a.m. on Friday the 13th -- the final day of the Fiesta de San Fermin, commonly known as "The Running of The Bulls." A crowd has gathered along 800 meters of Pamplona's cobblestone streets to either watch or participate in organized chaos. The only separation between the gawkers and the runners is a wooden railing and a proverbially loosened screw.

I stand among the runners in the plaza  -- poised. 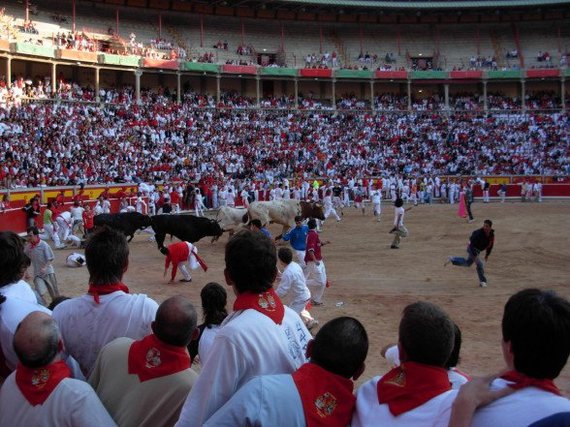 To voluntarily run with the bulls you must be either ignorant, intoxicated or insane. If you decide to do this someday, I suggest you make your choice before 7:55 a.m. to avoid nausea, shock and potential dismemberment.

There are tough dudes trying to look cool by being silly or loud, there are normal people battling soberness and social pressure and then there are the very very few of us who have deeply contemplated the situation... and have decided to run with the bulls not for the thrill (there are other ways to get an adrenaline fix, I recommend almost all of them over this one), or for the postcard picture or for the memory.

No, I decided to run with the bulls because I needed to dance with death. I needed a rite of passage. I was standing there on purpose  --  completely aware and sober.

If you're paying attention, this means I must be insane.

It's entirely possible that my sanity had left me for this moment; but when purpose overrides sanity... what is a man to do?

"You could die, man," said Kai, my traveling companion and relatively sane friend. "Or worse. Are you sure you really want to do this?"

The bottle rocket launches from the stables, announcing the gate is open and the run has begun. There are no less than six gigantic fighting bulls who have just been let loose on the streets with nowhere to go but toward us.

People tell you about fight or flight... they often forget to mention freeze. About one third of the crowd took off running immediately -- those are you flighters. There's another third who is shouting belligerently and actively looking for the bulls and a chance to mess with them  --  those are your fighters. Then there's the third who have become fleshy bowling pins, standing completely in shock  --  those are your freezers.

My initial instinct was to run. A split-second later I wanted to wait and see the bull horns before running. My third and deepest instinct was to help all of the freezers.

I found out that I put my need to lead squarely in front of my need to live. You can't find that kind of thing out about yourself until you tiptoe to your edge.

"RUN! VAMOS! ALLONS-Y!" I find myself shouting into the faces of the frozen.

Like frightened children, they look at me helplessly for direction... and quickly we become a team. This is the metaphor for everything I do and love to do in my life... to help the frozen learn to run as part of a team.

We're running for our lives together.

I turn down the walled straightaway known as "Death Alley" because there's no way out except through the other end... I haven't seen them yet, but I know the herd is close behind me. How?

So visceral that eardrums become superfluous. I feel sound itself in my bones as it batters the streets underneath five tons of stomping death.

...and then I look to my left and I see a horn pass underneath my elbow.

Inches. Inches from losing a chunk of my body or worse.

Another horn goes by, and I press myself closely up against the stone wall on my right as I continue running.

Another horn passes by my shoulder, I feel the closeness of it and instinctively turn to see the eye...

"What are you doing?" asked Kai. "It's only midnight. Are you done drinking?"

Two hours later, I'm still staring into the eyes of the most restless bull in the stables. He couldn't sleep, either. He knew something big was happening. This is it.

It's the bull I saw last night... and he's bringing up the tail end of the stampede. I'd like to think there's a moment of acknowledgement as he obliterates the air alongside me.

The moment ends abruptly when the runner in front of me trips and falls forward just as we reach the opening at the end of death alley. I have no choice but to leap over him... which I manage to accomplish... but I don't stick the landing.

I spill forward, rolling instinctively into a crouch. The bulls have passed me, but one has turned around and is looking for a way out... this is the most dangerous time of the bull run. This is when people get pinned between horns and walls.

I look to my right and see a five-foot tall fencing with three large horizontal slats. I look back to the front and there he is, huffing.

It's the third time I've looked into the eyes of the same fighting bull. Oh, and by the way, I'm not a bullfighter.

Like stealing second base, I turn and dig for the fence. Is he following me? I learned from more than 13 years of baseball to not watch the pitch... run for the base as hard as you can and just plan to beat the throwdown.

I reach the fence and I leap over it, scraping some corners off of my skull and elbows on the way down. Looking up from my seat on the ground, I see the bull trotting off toward the bull ring.

It's a reasonable question from a true friend. I will never forget the look on his face when I told him my answer. Resignation. Concern. Disbelief. Respect.

"I get to see what kind of mettle I'm working with in this life," I told him. That's why I run.

The Tackle Bulls Running Of The Bulls Spain Sports