Sean's and my friends Matt and Tom arrived at our apartment around 8 p.m. for some New Year's Eve drinks and finger food. Hurriedly, I was plating meatballs and chicken wings when Matt knocked over a bottle of red wine, sending it crashing to the floor. Immediately, all four of us were sopping up red wine from the carpet and searching for solutions to avoid the stain. Happily, after 10 minutes, it seemed that the stain was avoided. We commenced eating and drinking and were then joined by our friend Gareth.

We headed off to meet our other friends at a bar in Dupont where I'd thrown Sean's surprise birthday party last May. Uncharacteristically, Sean had made the decision to act as the evening's cruise director, and a couple dozen friends met us at this bar.

It seemed like any other New Year's Eve: hanging with friends and watching Anderson Cooper be cute and Kathy Griffin be obnoxious on big-screen TVs throughout the bar. But there was also an underlying anxiety that was hard to describe. Knowing what I know now, I can see the reason why at 11:59:30, almost everyone in the room was staring at me and Sean as they counted down.

Three... two... one... happy new year! I kissed Sean and pulled back to see his eyes filled with tears. He leaned back in and said in my ear, "I've got a question for you." 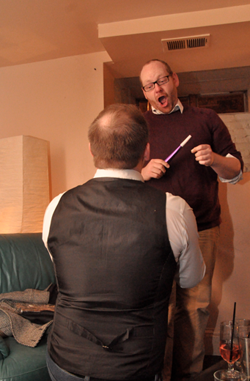 The next 10 seconds felt like a lifetime as Sean struggled for words and tears streamed down his face. Pausing, as the words weren't coming, Sean reached into his vest pocket, pulled something out, and fell to one knee.

Shock. My brain immediately went into hyperdrive, back to every wedding I went to as a kid and teenager. There was this feeling that because I was gay, a wedding was not only a long shot but damn near impossible. I'd resigned myself to the idea that marriage was for other people. Even with the work we've done toward equality, and even after attending several gay weddings, that underlying feeling pervaded.

"Will you?" he asked again.

He got up, and we embraced for what felt like 30 minutes -- shaking and crying.

"Don't make me turn around and look at all these people," Sean said. "I'm going to be a sobbing mess if I turn around and see them." I turned him around, and the merriment ensued.

So here I am today, a man engaged. No, Mother, we have not set the date yet. All we can say for sure now is that there will be rainbows, glitter, and at least two Tony Award winners who've already offered to perform.