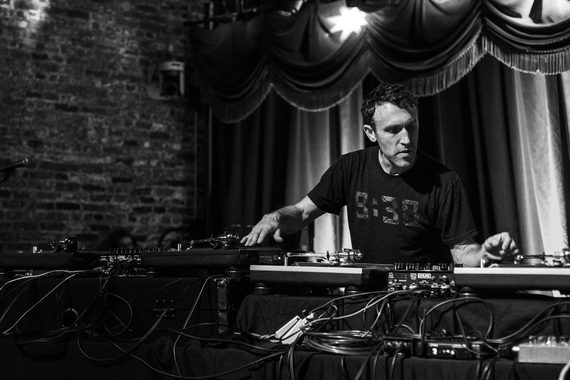 I walked into Brooklyn Bowl on Tuesday night with a lot of nervous excitement keeping my heart at a rapid BPM. The place was relatively empty, as I walked up to the will-call window and requested my media pass before moving into the venue and dialing up RJ Krohn on my cell phone. No answer. I anxiously paced around the venue, until I noticed RJ working with some cables and his laptop behind the turntables on stage. I approached him and introduced myself, and he was immediately apologetic; apparently a cancelled flight delayed his arrival to just fifteen minutes before doors had opened. I told him to take his time, I was flexible.

The place began to fill up, and a vast assortment of humans made their way through the doors and into the open venue. I received a text from RJ telling me he'd be ready to meet shortly, so I moseyed along through the dance floor as DJ Thanksgiving Brown warmed the crowd up. I met RJ, who led me up and into the green room. Once again, that nervous excitement and inability to keep my voice from shaking took hold, and I'm sure it was obvious that I was just a tiny bit fan-boying. 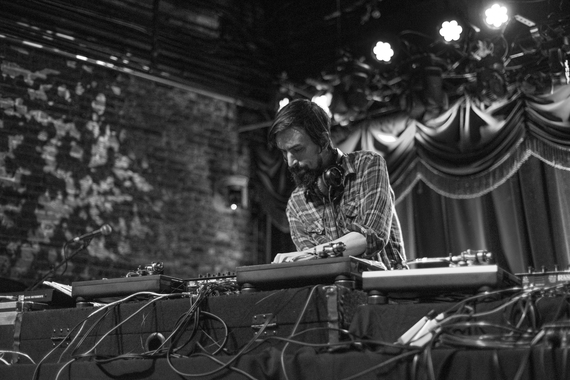 I've been a fan of RJD2 for some time now thanks to my roots just outside of Philadelphia. If you're from anywhere near Philly and you're a fan of hip-hop, you know who Ramble Jon (RJD2) Krohn is. I had a couple questions I wanted to discuss and he had graciously allowed me an audience.

Shawn: Rhymesayers, I love those guys, and I saw the track listings for your new album and you've got "Up in the Clouds" with Blueprint. I was curious, any chance of another Soul Position release?

RJ: (Laughs) I would say there's a very high chance. I don't want to commit anything that y'know... let's just say that we've done a lot of demos over the last couple years toward a new Soul Position record. So I think that it would be highly likely that we could pull off another release.

Shawn: Now, considering your heavily analog and old-school style of production, do you ever feel the pressure of trying more mainstream sounds to stay current?

RJ: I do! That's a great question. I feel like, the way that I've kind of come to terms with the whole thing is I feel a need to move forward even if I'm traveling in a parallel to what is "en vogue" in terms of production styles now -- I'm comfortable with that. I've never tried to be a retroactive artist that's going back in time or staying in the boundaries of one particular thing. From the inception of me being involved in music, I've always felt the need to not be current, but be aware of what is current, and incorporate the things that really resonate with me. I don't feel the need to make a track that will "pass" in that world.

Shawn: Your "Apogee" remix -- the Tycho song. I'm a big fan of Tycho, so I knew the original and thought that yours was a very stripped down version of that. How do you pick apart something like that and create a very bare bones track that is the "Apogee" remix?

RJ: That is an interesting story. When they sent me the track, they were like "hey do you want to do this tune?" Kinda the way that I assess remixes is, "can I take this, and keep some spirit of this, and at the same time say something new with it?" And if I feel like I can't do that, then I just pass on remixes. There's songs that I'd never remix. Like "Ante Up" by M.O.P. I would never remix because I don't feel that you can make it any better; it's such a perfect execution of a particular aesthetic. I need something that I could grab onto and take a detour with. I was listening to Apogee and a thing came into my head that was like: "Well I could make this more aggro, I could ramp up the BPM," but I was like "What would happen if I did the opposite of that? What if I paired it down, and stripped it down, and made the whole thing about restraint as opposed to bombast..." Do you know "Moments in Love" by Art of Noise? I wanted the first half of the remix to kind of have a "Moments in Love" vibe to it, like there's a lot of space in it. And it was really about restraint, and a really hard thing for me to pul off because my instinct is to get to the punchline. But I look back on it now, and I realize how much restraint was required to do that.

Shawn: What advice would you give up and coming producers in regards to staying true to their craft?

RJ: Don't mix a career and music. If your number one goal is to maintain the "integrity" of your artistry, then my advice would be to not put yourself in a position where you have to rely on your artistry for your rent. And I know that sounds a little bit overly simplified, but it is kind of the truth. I see more people get disillusioned by the music industry via expecting a music career to make them money, or expecting a music career to make them anything really; fame, money, whatever.

Shawn: I only ask because, from an outsider's perspective, you've maintained your sound (despite it's evolution) but you're still playing packed shows, advanced sales of tickets were sold out for tonight. A lot of people stay excited to come out and see you perform.

RJ: It's crazy! It's a weird thing to me, but it's reassuring because the one thing that I've held sacred with all of this is I don't want to be compromising the music y'know? I'd rather work at McDonalds than put out an album that is in any way compromised to be creative. Because that's a thing that I feel like exists outside of money, and my career, and the fact that I got a family to feed, and that kind of stuff. At some point in time I've gotta look back on a catalog that I made, and I wanna be as proud as I possible can of every slight piece of it. And that's why I turn down a lot of things and why I don't feel the need to try to y'know "pass," again, in either the EDM world, or the top 40 rap world, or the electro world, or any of these things.

By this time the set was rapidly approaching and RJ had to finish his preparations. I thanked him for his time, and made my way back downstairs into the crowd; extremely excited that I had just gotten the opportunity to learn a little bit more about the man behind the beats. 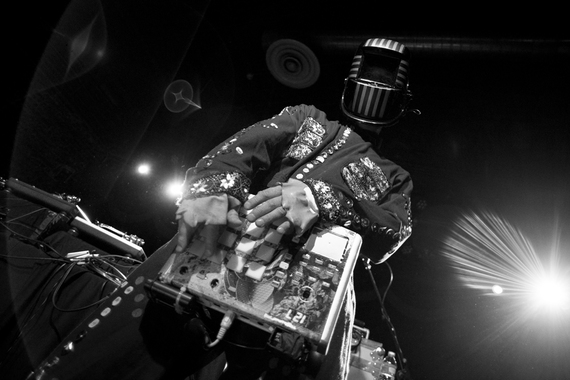 DJ Thanksgiving Brown finished up his set and the crowd settled in for RJ to take the stage, only it wasn't Krohn that came out; it was his alter ego Commissioner Crotchbuttons. Donning a bionic-man costume of sorts made up of a welding mask, bedazzled mechanics cover-alls and an MPC controller codpiece. After a few solid bars of MPC production and comments about instruments of the future, play-time was over. Commissioner Crotchbuttons ran behind the turntables and disrobed revealing RJD2; and the show was ready to begin. 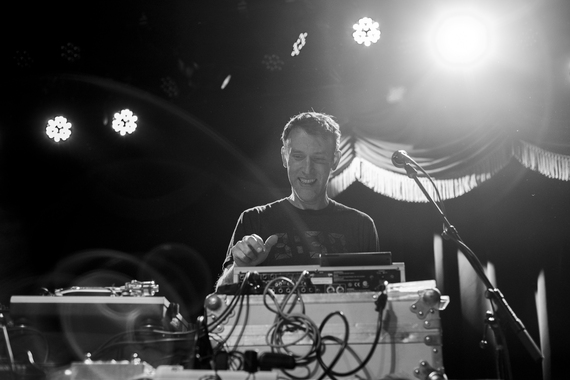 What followed was a perfect hour and forty-five minutes of old school hip-hop vibes intertwined with a dizzying stage show. RJ worked back and forth across the stage between a computer, four turntables, two mixers, and a sampler while live mixing a seamless extravaganza of break beats, scratching, and on-stage performance. Watching the man work is nothing short of mesmerizing. He handles himself behind the tables with a perfect mastery of his craft. His transitions were flawless, he switched vinyl with ease, and never seemed to miss a single beat; a childlike grin across his face with every cheer from the crowd. A man who truly got his kicks from performing and affecting people with his music. 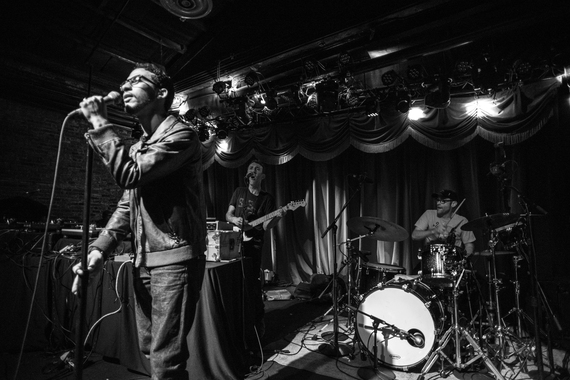 Midway through the show, he brought out soulful singer Jordan Brown as well as a live rhythm section to perform a few songs including his new single "Peace of What," slated to be released on his upcoming album. In honor of David Bowie, the group performed a fantastic rendition of "Andy Warhol" by the Thin White Duke himself. Jordan Brown exited the stage after his singing while the rhythm section remained, as RJ tore through another mix of danceable beats ending the show with two of his heavy hitters: "The Horror" and "Ghostwriter." The latter including a reprise of Commissioner Crotchbuttons, and a one song encore. 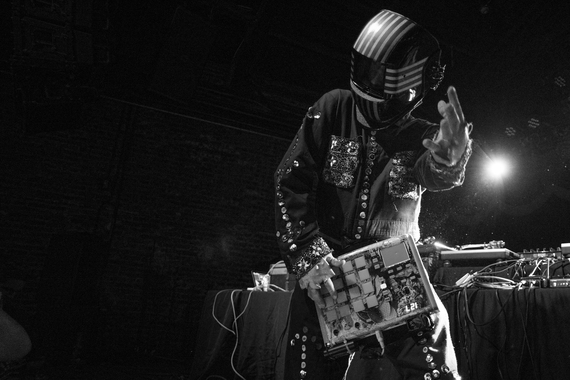 The night ended with RJ coming out on stage with a box of records, selling and signing them personally; staying the full amount of time until every waiting fan had had their chance to shake his hand, and catch an autograph or a photo. Once again I had left an RJD2 set feeling fulfilled and enamored by the man's humility, and commitment to his fans. I'm extremely grateful that I got the opportunity to sit down and chat with him. Here's to hoping I can do it again.

RJD2 is currently on tour to promote his upcoming album Dame Fortune. Dates can be at his facebook page.