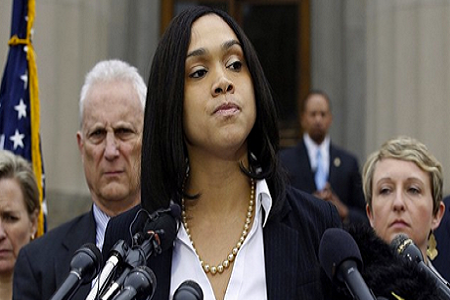 "Meet Marilyn Mosby." "7 things to know about Marilyn Mosby." "Who is Marilyn Mosby?" The list of media introductions of Baltimore's 35 year old top Prosecutor are long, repetitive and AWESOME. Not for the obvious reasons, I, as a black female professional would think seeing another black woman, poised and standing in her space as awesome. Awesome because, like it or not, black or white, law enforcement or citizen, you had to SEE her.

I think the last time I saw so many "who is..." questions flying around was after Beck won a Grammy for Album of the Year. Similar? Only in that they both seemed to appear out of nowhere, you know, the way someone does just because you've never heard of them. Significant? Only if you keep track of Kanye's award induced tantrums. I don't.

So while I can't tell you the exact date I asked google "Who is Beck?" I can tell you I "met" Mrs. Mosby on May 1 around noon. On that Friday afternoon I logged onto FB and saw a post by my friend Eric Nicks (I actually know him and we are friends in real life) that read, "Young women Marilyn Mosby should be your role model not Instagram models." Marilyn Mosby? Who? My curiosity was quickly followed by a Google search.

Before I read one word or pressed the play arrow, I smiled and uttered a silent YES! I'm not sure if it was her head tilted and raised chin posture, the fact that she had at least 10 people, clearly her senior and white standing behind her, or if Eric's post clued me into the fact that this would be good. So I click, volume up, office door open and wait for the ad to pass. While the shake in her voice in the beginning would say, "I'm nervous" her stance said, "I'm strong" and her words... well her words said, I SEE you! I hear you! I'm here for you! I am you!

Somehow through my tears, my brain, odd as it can be at times, referenced Ralph Ellison's Invisible Man and James Cameron's Avatar. The pain of feeling invisible and the deep exhale that comes from being seen, even if it's for a second, flooded in.

By invisible, I don't mean like a cool super power you might choose as a child. I mean invisible in the way Ralph Ellison described more than 60 years ago.

"No,I am not a spook like those who haunted Edgar Allen Poe; nor am I one of your Hollywood ectoplasms. I am a man of substance, of flesh and bone fiber and liquids and I might even be said to posess a mind. I am invisible, understand, simply because people refuse to see me. Like the bodiless heads you see sometimes in circus sideshows, it is as though I have been surrounded by mirrors of hard, distorting glass. When they approach me they see only my surroundings, themselves or figments of their imagination, indeed everything and anything except me."

If you are black or brown in this country, you know what I mean. It's often felt in the presence and polar opposite of white privilege. While sometimes unintentional, it's painful nonetheless.

After Freddie Gray's killing, we watched as Baltimore was invaded by news crews and reporters competing to be seen while portraying residents through a "hard distorted glass" and using "thug" in place of what they couldn't say out loud. I didn't count but I would venture to bet "thug' and "shocked" were used more than any other words throughout the breathless coverage. We can play the Scarface drinking game if anyone wants to count.

For someone with eyes, ears, a heart and common sense, the pain in Baltimore should feel palpable. On May 1, Marilyn Mosby numbed the pain for a moment. Like Jake to Neytiri, she said I SEE you! I am you, and even if the world doesn't, I understand and believe in you.

I know the chance of others really seeing us is isn't all the promising. But if WE take a second to look at ourselves and each other through soft and undistorted lenses, maybe that's all the seeing we need.