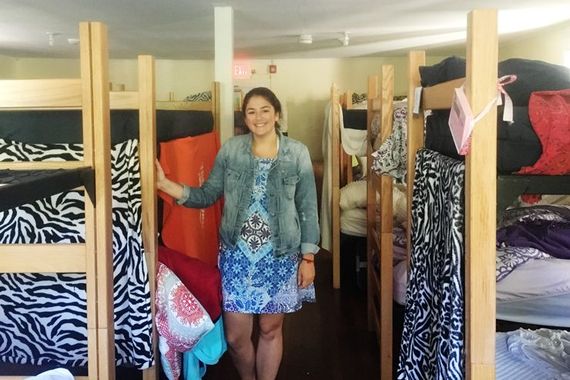 I put on my pajamas and a ski hat and shiver my way into bed. According to my phone, my "bedroom" is 15 degrees.

St. Lawrence, where I am a senior in college, is in upstate New York (I mean way up there; we Laurentians tend to laugh when people consider Syracuse upstate). The average winter temperature here is 26 degrees. And nope, the heater isn't broken: This is the standard sorority sleeping arrangement on campus. While every resident is assigned a room, all the beds are bunks on a porch at the back of the house. And the windows stay open year-round -- unless it gets below zero.

The rumor is that cold dorms started as an old "blue law" that stated that if too many women lived in a house together with their own rooms, it would be considered a brothel. I have never found any evidence of this, and Snopes, the internet myth-buster/dream killer, confirmed that this "brothel law" rumor is widely popular but very unproven. In reality, the open-windows rule is supposedly due to a fire code, but also may stem from a theory that circulation and cold air minimize illness. (I know, I know.)

Water bottles have been known to freeze on our bedside tables. I have an electric blanket and a heated mattress pad. Still, a freezing-cold bunk porch sounds like the last place you'd want to live, but hear me out: Sleeping in the cold dorm is, hands down, the greatest sleep I've ever gotten in my life, post-womb. As someone who has struggled with serious sleepwalking, nightmares, and a brief stint of insomnia, the fact that I can sleep all the way through the night there is huge. I even like it better than my childhood bedroom (sorry Mom).

It's cold, dark, and always quiet. I can go to bed whenever I want, and can take a nap anytime during the day. When girls wake up, they head to their rooms to get ready, so there's no turning on lights and rummaging around to get dressed. There are no rowdy groups banging on all the doors in the hallway after returning late from the bar, and I've never been kept from my bed by coming home to a sock on the door. The open windows actually act as nature's white-noise machine.

I always forget how weird the cold dorm is until I have to explain it to other people. I often get flustered and feel myself getting defensive. While people think it sounds miserable, it really isn't something that my roommates and I "put up with" -- most of us genuinely like sleeping there. It seems crazy, but I was more than willing to trade my single room in Manhattan this summer for the cold dorm come fall.

I don't doubt that Greek life on campus could fight such an outdated practice, but I truly think most of us like the cold dorm. For one, it's a tradition. While I strongly believe that not all traditions are worth saving, this one feels like a part of who we are. Plus, it works: We can fit more people into the house this way, so more sisters get to live in if they want to. When else in life do you get to live in a house with 22 of your closest friends?