Today, I read for maybe the 10,000th time an assertion that supporters of Bernie Sanders are unrealistic, that Bernie Sanders supporters will all be disappointed if they elect him because he won't be able to bring the change he's promising, that Bernie Sanders's policies will be "just another example of Democrats making promises they can't keep," and so on and so forth. And I'd like to briefly dispel a misconception about people who support Bernie Sanders as the next president of the United States:

I've got a college education and a good job, and I'm guessing I'm not the only Sanders supporter who does. Now, this doesn't necessarily make me smart, but it is at least an indicator of having achieved some level of learning that would indicate that I'm capable of coherent and independent thought.

And guess what? Neither many of the Bernie Sanders supporters I've encountered nor I expect any of Bernie Sanders' major proposals to take effect in the next 2, 3 or possibly even 4 years. I don't support Bernie Sanders simply because I think he'll magically overturn Citizens United, fix our indisputably broken campaign finance system, legalize marijuana, eliminate privately owned prisons, institute a single-payer healthcare system, crack down on Wall Street, or pass most of his other proposals within his first year of office.

Allow me to let you in on a little secret: I, like presumably most Americans who support Bernie Sanders, do not expect miracles. 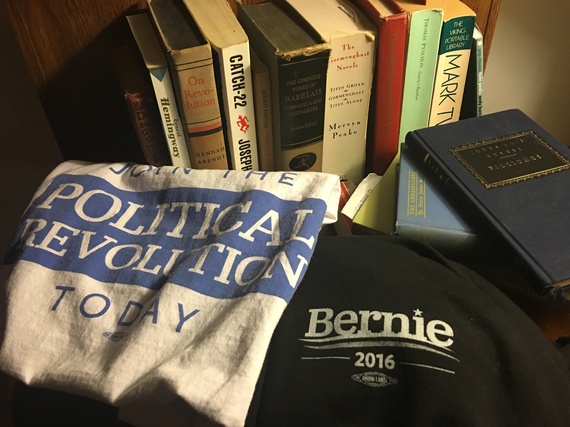 What I do expect, by electing Bernie Sanders, is to have an honest president whom Americans can trust at all times to be completely sincere, and who will work as hard as he can to represent the interests of the American people. By electing Bernie Sanders, I expect that the leader of our country will actually represent me and not just major corporations who are cutting him big checks. And no, I don't get the sense that Hillary Clinton possesses any of those qualities. Decidedly.

And you know what? Maybe the "political revolution" Bernie Sanders keeps talking about won't happen. Maybe electing Bernie Sanders will put him in office for 4 years, nothing productive will happen, and once his term is over, we'll be back to "politics as usual" and huge corporations like Comcast and pharmaceutical and insurance companies and huge financial institutions will go right back to doing whatever they want because hey, they run things and they have money, so who's going to stop them, right?

But if Bernie Sanders is elected president, then maybe, just maybe, things will change. And that's worth a vote. That's worth trying.

(Not to mention: the Affordable Care Act was never "supposed" to make it, and remember what happened there? Also worth noting that Bernie Sanders helped write it. Implementation has been far from perfect, but he still got it passed.)

And if Bernie Sanders is elected president and this whole "political revolution" thing we all keep talking about actually does happen, then think of the possibilities. We are at a point in our history when we, as citizens this country, can legitimately make the United States of America the indisputable greatest country on earth. We have the rare opportunity to lead the world by example in showing what a government can do when it isn't corrupt and solely focused on making a handful of individuals disproportionately wealthy.

THAT is what I'm voting for. I'm voting for the hope, the possibility, that things will change--realistically, over time. And electing Bernie Sanders will send a clear message--to corporations, to the media, to our current elected officials, and to anyone progressive who's thinking about running for office but doesn't believe in getting support--that enough is enough, and that it's time to start listening to the public and not just to a board room full of campaign donors.

Electing Bernie Sanders is pushing a snowball off the top of a mountain and seeing how far it will roll.

As a supporter of Bernie Sanders, I fully recognize that this whole "political revolution" thing is not a guarantee. But right now, the opportunity to start one is a whole lot more appealing to me than the status quo.

Learn more about where Bernie Sanders stands on the issues at http://feelthebern.org.