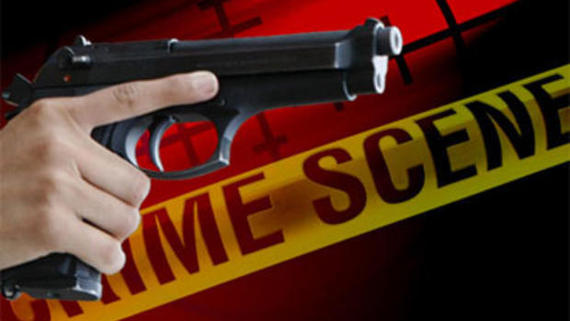 "You're an athlete. Expect to get hurt. But hopefully not by your friends."

Michelle, a dance teacher at the Mesa Arts Center, gently patted one of our students' arms, which was hurt because a boy had pulled it. I looked pointedly in his direction, scrunching my eyebrows sternly at him for deliberately hurting his classmate.

Fifteen minutes later, there was a terrorist on the loose in downtown Mesa, Arizona, a block or two away from us.

Our upbeat, vibrant dance class became an endangered place, despite all the sunshine floating in through the windows and the children's lively faces.

What you have to understand is that the Mesa Arts Center is Mesa Downtown. We are centrally located, one of the first buildings you would consider as essential to the cultural makeup of the city.

Suddenly, as a teacher, my priorities went from teaching the class to preserving the class.

The older kids figured out something was wrong as soon as I told them we were going down the elevator instead of the stairs.

Unfortunately, earlier that week I'd declared there was no way they could ever, ever convince me to let them take the elevator. I was biting my tongue now as I ushered them on. Who knew something like this would come up? Something that would compel us to shelter the kids in any way we could while we took them down to lunch?

Expect to get hurt. But hopefully not by your neighbors.

The hardest part was steeling myself in front of the kids. I never knew that these days, becoming a teacher means becoming a soldier, a hardened soldier. After my supervisor had come upstairs to let me know six people had been shot already, I dropped everything and clasped my hands in prayer, desperate for grounding, asking for strength and protection. I turned away from the class, standing by the shoe rack, fervently praying.

"Are you alright Miss Hira?"

"Yes, yes, get into your lines, show me your leaps." I hurried to the Michelle dance teacher I was aiding that day, a thought dawning on me. My sisters. They were supposed to be heading downtown, showing up to work the camp and festival with me. Were they--God forbid, God forbid. My thoughts were reeling as I took the teacher aside and told her through hiccups and tears that surprised me by their suddenness.

"Michelle be careful when you leave, I know you have to report to your second job and you HAVE to be careful."

"You be careful too, with that headscarf of yours. There are crazies out there."

"I need to call my family Michelle. Do you mind if I step out?"

I stepped out with my phone in hand. One ring to my Bhabhi, my sister-in-law--answer. My father--no answer. My mother--sleeping after a full night shift at the hospital--don't wake her. My brother--no answer. He always answers his phone, why didn't he? What if--God forbid, God forbid. Allah hifaazat de. My sister--please answer, please answer--

Tears of relief and a struggle to quickly get out the news and to forbid her from coming to the area. We had no idea where he was going next.

"Can you come home?" she asked.

"I have to stay here. The kids Nahil, the kids--" It was overwhelming, terrifying. The light shifting in through the large windows across the brightly colored hall suddenly made me feel vulnerable instead of safe. I was easily visible out here.

"I'm supposed to be there though, Hira."

"I know, but we have enough workers, some parents are taking their kids home. Is Bhabhi ok, is she ok?"

A ringtone sounded and I jumped. My older brother was calling.

"It's Asim, Bhai, it's Asim, on the other line, wait I have to answer his phone!"

It's a good thing that it's only later I heard the terrorist had broken and shot into someone's apartment to escape the police. Even our houses weren't safe.

When the kids and I had gone downstairs for lunch, the teachers waited with bated breath for the police to catch him. The outdoor Spark Festival for creativity was going on halfheartedly, the musicians still defiantly playing. Even though my instincts told me we should all be quiet in case he's in the area, so he doesn't decide to target the one place that terrorists find so attractive--a center with school-age children--in a way, I was happy the music kept playing.

He was caught the same day, March 18, 2015, around 1:00pm after a four to five hour chase; two blocks away from my home, and across the street from my younger brother's bus stop.

It is a miracle that Mesa Public Schools was on Spring Break. I prayed thanks for that.

My younger sister, I heard after, had been walking home from the tram station at the same time I was talking to her on the phone, a few streets away from the terrorist's wayward run. I prayed thanks that everything had worked for my family but ached deeply for those who were hurt; the man who was in critical condition, and eventually died. The man shot in his own apartment. His neighbors waiting in fear inside their homes.

The whole valley's police departments were after him: Chandler, Mesa, Tempe, Phoenix, even Arizona State University's.

And how did they catch this armed man?

Back at the classroom, in whispered voices we teachers discussed our evacuation plans. My co-worker Lauren pointed to the door jarringly in front of us. I was supervisor that afternoon.

"If he enters that door, in a commanding voice you get the children under the tables, and try to get them to crawl in the direction of that side door."

I stared at her weakly. In a commanding voice? I could do that, but would they listen? It was hard to get this range of 5-13 year-olds to line up for class and put away their games, let alone dive under a table because of an armed terrorist.

But I nodded anyway. We are naked against a gun. If he came in, other than hide and crawl, what could we do? I briefly imagined all of us under those heavy gray tables, counting quietly to three as we overturned them, hopefully knocking him over, or at least his gun. I imagined taking the chair I was seated in, using it as a shield, and then as a weapon, watched the chair sail in my mind's eye across the classroom to hit his head, his arm, his chest, anything to deter him.

What else could I do?

It made me shiver.

A child came up to my desk, and I forced a smile onto my face, bracing myself for her question. Did she notice the whispers? Does she know that my co-worker Sunny is worried because the terrorist had attacked a Bistro across the street from EVIT, the technical college near her own Mesa Community College? Does she know Sunny worries that even though it's Spring Break, there are still teachers and students using facilities on campus? Does she know that my sister usually goes to MCC on odd days of the week and might have been walking the same streets as this terrorist? Does she know her hometown is being attacked?

"Can you open this for me?"

A yogurt pack with bright lettering and pictures of fruit was pushed into my hands by the waiting child, and as I opened it, I wondered how anything so mundane could still be asked of me when it felt like the world was falling apart.

I guess I became part of a legacy. Peshawar, Pakistan: almost 150 school children and teachers shot and killed ruthlessly by terrorists. Within a month, the students and faculty were back at school, rebuilding their communities, their classrooms, their souls. How did those teachers feel? What decisions did they consider while trying to save their students? And there I was, standing in those brave teacher shoes, halfway across the world, considering strategies and procedures, how to get a large camp of students evacuated if I had to. Another Pakistani, soldiering to fight terrorism, this time in the United States.

The Mesa terrorist was caught eventually. So many things were wrong with the way the city reacted to it. The trams were still running, he could have escaped or terrorized the passengers on his way to the city, could have wreaked more havoc. And if you send most of the neighboring city's police departments to one place, what if the man escapes to another city? There would be no police left to catch him. He would have easy access to whoever he wants. This man wasn't just running, he was taking down people as he tried to escape. It's as if he wanted to raze as much and as many as he could before he was caught and carted to jail.

Ryan Giroux was his name.

When he was caught, there was a significant sigh of relief from all the teachers. I called my sister and let her know that it was her choice to come or stay at home, and I think she came for me, mostly. But I was bewildered by everyone's reactions.

How is everyone so calm?

Just because he was caught doesn't mean he doesn't have accomplices. There was a terrorist in Peoria, Arizona who was doing the same as we spoke, just an hour away for God's sake!

Why wasn't anyone connecting the two terrorists? They must be working together, right? They must have a network of sleeper cells. Ryan Giroux had white supremacist tattoos on his neck and face, only one news station bothered to mention that. So where are his accomplices? Why weren't his parents, his family, his business acquaintances, anyone remotely related to him being carted off for questioning? Where was the FBI when you needed them? Why is it that a day after the attacks, the story was already petering from the news? That most of my friends and relatives in other states hadn't even heard about it until I told them? Not worthy of international news? Even though a white terrorist has cropped up in too many states by now, too many states for people to still be calling them "lone wolves."

If his name had been different, if he'd been bearded and robed, would I as a Muslim be allowed to mourn and fear and brace myself the same way I was that day? Or would I be looked at with suspicion, disgust, unease?

I didn't blink twice at my white co-workers, didn't question them. It was obvious to me they had nothing to do with the violence going on outside, no affiliation, and there was no reason to connect them to it.

Would they do me the same courtesy? Hopefully.