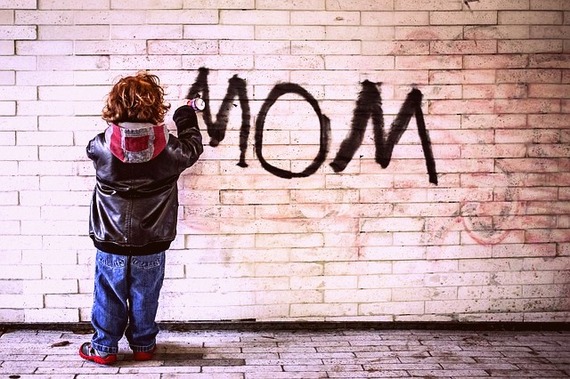 How did a perpetually single, independent woman like myself finally get settled down into a role that I had always harbored acute disdain for?

Growing up I never wanted to be a housewife or even a working mom. I wanted to be free, travel, take lovers, and never be tied down to a house, man, or children.

Well, I did all of those things that I wanted to do and then some. By the time the age of 34 came around I had already been married and divorced, had no children, and had retained single status yet again for many, many years.

But I wasn't exactly free. I was tied down. I was tied down to a corporate job, bills, a car payment, and rent. I had cats (and I was perfectly happy to become the crazy cat lady.)

I watched the people around me at work have babies, find new relationships, get married and break-up. They weren't free either. But they were living. I was watching them live from the sidelines, masquerading behind my veil of "independence."

And then I met my now husband. I was a tough shell to crack as far as he was concerned. I wasn't interested in commitment because I was too scared of cleaning up the pieces when it all fell apart, which is all I had ever known in regards to romantic relationships.

I was only focused on the negative aspects of being in a relationship because - for the most part - all of my previous relationships had been negative, dark, and depressing. I didn't want to go there again.

But my now husband was very persistent. He slowly coaxed me out of my fear and into a safe place where I could receive love again without feeling vulnerable or suspicious. I fell hard for him. But the relationship wasn't dark or scary. It was hopeful and inspiring.

It was challenging of course because he was a single dad to a young son, but the relationship felt mature. It was grown-up. There was no drama and no theatrics. Well, maybe there was a little drama on my part in the beginning, but I eventually grew out of that.

Creating drama was a tool I was accustomed to using in the past. It can be a tough thing to let go of. It's a dirty habit that comes with the prize of instant gratification but not so hot long-term results.

And so, when I was pregnant with my daughter, I purchased my first home at the age of 35, moving out of the tiny one-bedroom apartment I had lived in for eight years during my single, "independent" years. My little cocoon in which I hid from having a life filled with babies, school drop-offs, marriage, and the day to day struggle that is raising a family was now gone.

Myself, my belly, my current husband, and stepson moved into a beautiful home in the suburbs.

Sometimes I wonder what would have happened to me if I had stayed in that little apartment, worked the same job, and had never met my current husband. Would I still have met someone to share my life with? Or would I have become that crazy, single cat lady that everyone used to joke about?

I'll never know. But I realize now that my disdain for suburban housewives was nothing more than my own fear of commitment and living a life that was the same as everyone else.

Now I know that every mom who lives in the suburbs and stays at home or goes to work has their own story, their own problems, and their own confusion about how to do this thing called raising a family. No one knows how to do it right. They're just doing it. It's a brave thing to do.

I know it's easy sometimes to judge "those moms" who drive the SUV's, wear yoga pants, and shop at Target. I used to be that judgy person. But now I know better. THAT mom isn't every mom and many of those moms out there who we judge had a very different vision for their lives at one time.

I can say, at this time, that I am fulfilled in my suburban mom/stepmom life. I do the things that need to be done for my family and I'm following my personal passions. I'm discovering honesty and peeling away the layers of fear that I've carried with me from my past. I'm living.

That label of "suburban mom" is just a label. It's not everything that I am. I'm not afraid of it anymore.

More from Michelle: 5 Ways You're Sabotaging Your Relationships (And What To Do About It)

Follow Michelle at The Pondering Nook for more insight about relationships, parenting, women's issues, divorce & much more. Also find her on Facebook & at The Broad's Way Podcast.

More:
lifestyleMotherhoodParenting divorceParents
Newsletter Sign Up
Raise the kind of person you'd like to know
Subscribe to our parenting newsletter.
Successfully Subscribed!
Realness delivered to your inbox