At 5 years old, Jazz Jennings became one of the youngest known examples of an early transition from assigned male at birth to female. Ever since then, Jazz and her loving, supportive family have been sharing her story and inspiring trans youth around the world. 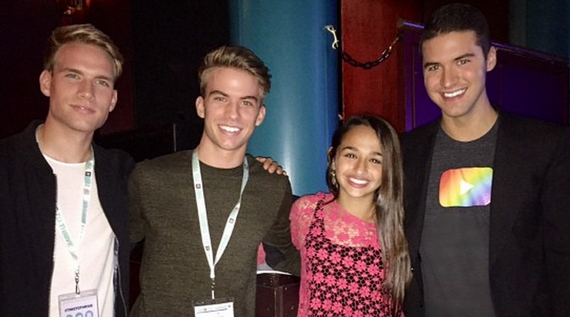 I met Jazz earlier this year at Time to Thrive, a conference focused on promoting inclusion and well-being for LGBTQ youth. Jazz gave a powerful keynote speech talking about why she thinks it's important to use her voice as an advocate for her peers. Her strength, humor, thoughtfulness, and charm brought the house down and I could immediately tell that, at 14 years old, she was already poised to become a leading voice for the LGBTQ community. I couldn't think of a more deserving person to be named one of "The 25 Most Influential Teens " in 2014 by Time, amongst many other impressive recognitions.

Check out the videos that Jazz and I filmed for our YouTube channels during her recent trip to New York City and be sure to watch her new TLC docu-series, I Am Jazz, airing Wednesdays at 10pm.

Raymond Braun leads social campaigns for YouTube. He is currently on a volunteer leave of absence from his job to focus on launching an LGBTQ-themed YouTube channel. He was named to the 2014 Forbes 30 Under 30 class for his work on LGBTQ marketing, community engagement, and partnerships for YouTube and Google. Watch Raymond's first video and subscribe to his channel (youtube.com/raymondbraun). You can also chat with him on Twitter and Instagram.