The 32-year-old Angeleno has crossed the country photographing herself doing just that, for a photo series aptly titled "I Throw Myself at Men." The Huffington Post traded emails with the artist, and she revealed why she started it, her Craigslist encounters and much more.

HuffPost Arts: What prompted the project? You mention posting an ad on Craigslist, which is often seen by those who haven't done so as something extremely risky or bold. Do you have any interesting stories from those encounters?

Lilly McElroy: I make work about the desire to form connections with others and how difficult it can sometimes be to actually do that. For the "I Throw Myself at Men" series I was thinking about romantic connections and how awkward, painful, and wonderful it can be to try and form an attachment to another person.

Also, like most of my work, this project was prompted by my curiosity to see what would happen if I performed a surprising act in public. I spent a lot of my youth watching "JackAss".

I only used Criagslist for a few weeks. I quickly learned that it was more effective and fun to approach directly men in bars. I didn't have any real problems with anyone that I met on Craigslist, though. The men were nice and interested in what I was doing. For a while after my first Craigslist meeting, I was getting late night phone calls from a guy claiming to be Christopher Walken, but I'm not 100% sure those things were connected.

HuffPost Arts: What do you hope people take away from the images?

Lilly McElroy: That is a good question. There is obviously a strong feminist component to this project and that read is very important to me. Mostly though, I'm interested in talking about how human that desire for connection is. I hope people think about that for a little bit.

HuffPost Arts: Have you given any thought to what an inverse of your project would be like, and how it would be perceived? What would an "I Throw Myself at Women" series done by a man be like?

Lilly McElroy: Yes, I've thought about it, but I can't pin down what it would mean. It would be a different project, but it would also be a different project if it were a much larger or smaller woman. Those things would change the meaning significantly. When I think about the inverse of my project I think about Martin Kersels' "Tossing a Friend (Melinda 1, 2, 3)". I love those images.

HuffPost Arts: How long did the project take, and in how many regions did you attempt the shoots?

Lilly McElroy: I worked on this project for about two years. It took me a while to figure out how to take the photos and how to edit them. I photographed in Tucson, AZ , Kansas City, MO, Chicago, IL and Brooklyn, NY.

HuffPost Arts: Did the other people in the bars have much warning before the shoots?

Lilly McElroy: No, only the bar tender, the photographer, and the man that I'm throwing myself at know what is going on. The camera is never hidden, though.

HuffPost Arts: What are you working on next?

Lilly McElroy: I recently drove across the country and filmed a video of myself holding a boom box over my head and playing Bruce Springsteen's "Dancing in the Dark" to the landscape.

All images courtesy of the artist and the Thomas Robertello Gallery.

PHOTO GALLERY
'I Throw Myself At Men'
Kia Makarechi
Senior Editor for Mobile and Innovations, The Huffington Post
Suggest a correction 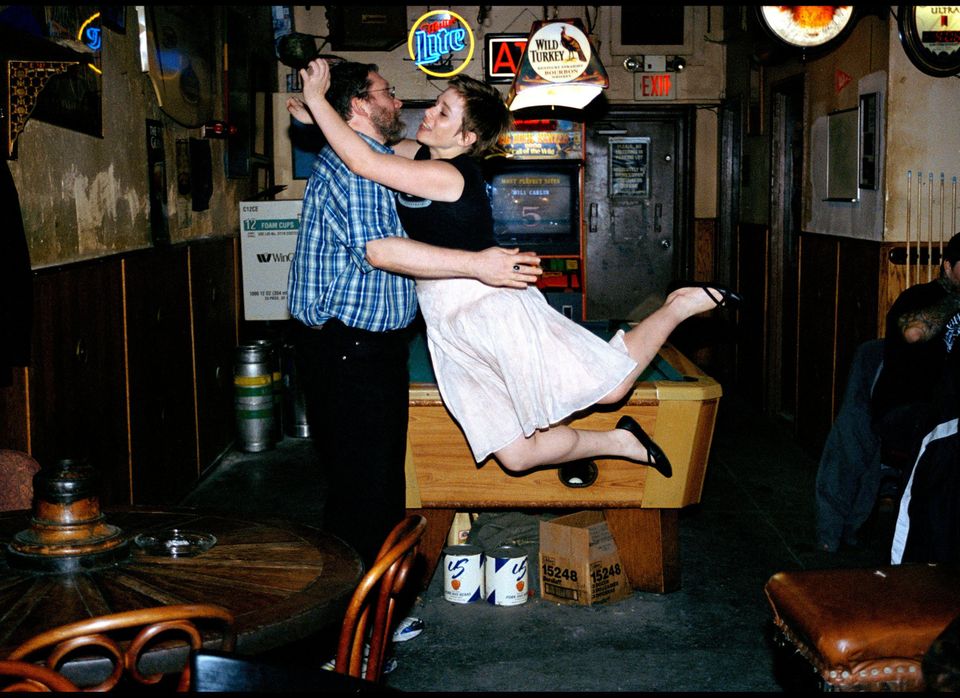