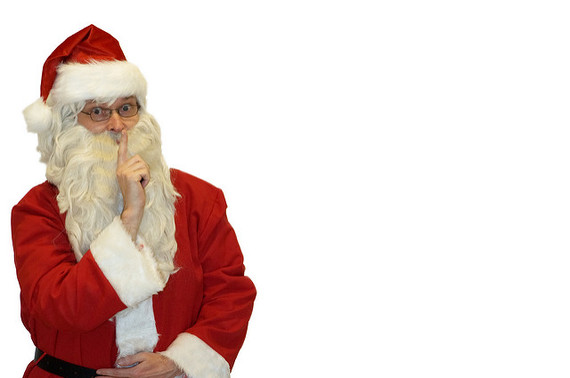 It was finally the big day. After weeks of adding items to the list on good days and threatening to tell him of all naughty behavior on bad ones, we were going to see Santa. A look of total disbelief washed over my son's face when I told him that we needed to get dressed because we had a date with Santa, and on a school day at that. He ran over to his hamper, opened it to snatch the nearest pair of jeans (never mind that they were dirty), and clumsily climbed into them. That's exactly the reaction I was counting on. Pure excitement that only a child could deliver.

As I bathed and dressed him, we rehearsed what he was going to tell Santa he wanted for Christmas. I put him in a stylish grey sweater with black jeans and sneakers. And despite it being no more than 45 degrees, I passed on putting a hat on him so that he would not have dreaded hat-hair. He needed to be picture perfect. On the way to the mall, my son's excitement ruminated throughout our car. And I felt like 'Super-Mom' for making the first of his dreams come true.

We arrived at the mall and rode the escalator up to the floor Santa was on. As we walked through the festively decorated make-up and shoe departments of Nordstrom, I spotted Santa ahead in all his glory. He was seated on an oversized velvet green chair that could easily accommodate him plus five other children. He was not at all like the robust big-bellied Santa whose lap I sat on and was too terrified to even look in the eyes. This one looked more inviting. With his long white beard, glasses that sat atop his nose, and a buttoned tweed vest that he wore underneath his open red and white trimmed coat, he looked like someone's grandfather, not the larger than life Santa.

As we advanced towards him, thoughts that I had been wrestling with for some time began to flood my head. Was I wrong for perpetuating a belief in my son of someone who does not exist? And why would I forfeit the credit for all of my hard work throughout the year to a fictitious white man? And is it right to memorialize, through pictures, the day when my black son sat alongside a white Santa and asked for gifts as if this stranger could or would actually bring them?

But it was when my son let go of my hand and took off running while yelling, 'Santa! I'm coming Santa! I'm coming!' that all of my worries dissipated. This moment was not about race or politics. It was a boy captivated by the magic of Christmas. It is the same magic that my mother created for me. Christmas is that special time of the year when children are brimming with anticipation and elation. This was the first year that my three year-old son fully understood what Christmas was about. And he wanted in on all of it. The television commercials featuring Santa zipping around on his reindeer-led sleigh, the countless cartoon Christmas specials, and daily inquires from neighbors and strangers alike about what he wanted from Santa only magnified his desire to see him in the flesh.

And I chose to give him that experience. He got to sit next to Santa. They discussed his Christmas list. There were candy canes and giggles. And, of course, the quintessential picture. My son got his wish, a good morning was had by all, and life went on.

But later that evening, my inner-critic retuned with a vengeance. As I sat with my finger poised on the share buttons of my social media accounts, I could see all of the eye-rolls and hear all of the kitchen table talk about the picture of my black son sitting alongside and cuddled up next to a white Santa. And it wasn't long after I posted the picture that one of my girlfriends who has absolutely no filter commented: 'Where is Black Santa? Black Jesus told me to tell you, hayle naw [sic]!!! Lol.' I wasn't mad at her. She had the guts to say what many I'm sure were thinking when they saw the picture.

Yet, I still have no regrets.

In this world that is plagued by racism, sexism, religious intolerance, terrorism, violence, income inequality, educational disparities, and so much more, I want my kid to enjoy being a kid and all that comes along with it. He has my permission to believe in Santa Claus, the Easter Bunny, that he is Batman, and that I am Cat Woman. These are not the years that he needs to be saddled with racial and political ideologies. Because the day will come soon enough when he is looked at as more suspicious than adorable. And he will worry about making it onto the sports teams of his choice. He will go through teenage angst and have his heart broken. He will obsess over college admissions and job offers. He will have bills to pay. And there will be nights, when I fervently bargain with God for his safe return home. Every single one of his childhood dreams that I can make come true for him, I will. Time and time again.

My son taking a picture with a white Santa will have no bearing on his future racial awareness or identity. He already proudly shares that he is 'brown.' He lives in a home and is raised by a mother who is solidly rooted in her racial identity, and whose entire life's work has been with disenfranchised people of color. But what this Santa experience underscored is that, as with many things, diversity is lacking. The Mall of America, or any mall in this country for that matter, should not be making headlines for hosting its first black Santa in 2016. And parents should not have only one racial option for Santa within a 40 mile radius of where they live. This, too, needs to change. But, in the meantime, as I responded to my friend's comment on Facebook, I welcome her husband and any other men of color so inclined to grab a Santa suit and make some dreams come true next year.