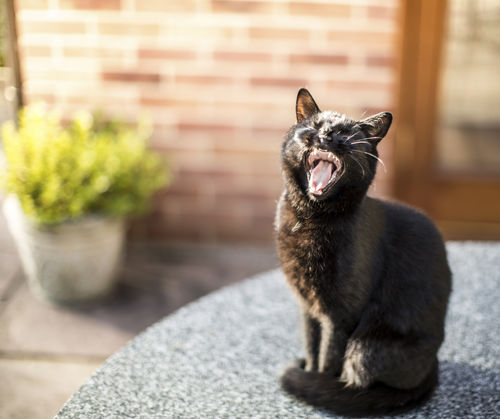 Some of the day-to-day dilemmas of being a woman range from finding clothes that fit to having catcallers inconveniencing your day. Whether we look homely or hot-to-trot, we get unwarranted comments from every which direction. Nonetheless, it's our reality, and for the most part, we've grown accustomed to this street harassment in its most minor offense, of course. But, I couldn't help but wonder if men would be so quick to smile on cue per my instruction, the same way they expect us to do so. My theory? Not so much.

But, I couldn't just assume that a gender that makes a mockery of courtship (these days) would suddenly mind if they were the ones being reduced to their looks and sex -- they might just enjoy being beat at their own game. With this in mind, I took to the streets and a few shots of Jack to get some reactions from guys, using some of the tired catcalls I could think of, and here's what I learned.

1. Confidence is key.
It takes a bit of confidence to approach someone, in general, but it takes a special kind of balls to do so disrespectfully. I literally tried to "spit" my game before I started drinking and was totally mute. I realized that liquid courage was the solution, and that catcallers are quite brave, if you ask me.

2. Men don't have time for the nonsense.
Sound familiar? That's because we share the sentiment. I chased one guy down the train platform, calling out the most obnoxious sh-t I could think of -- "Hey baby, come here. Slow down, sexy." However, this kid wasn't stopping. In fact, he looked a little scared the way he picked up his pace and doubled back to see where the banter was coming from.

Ultimately, after I gave up and revealed my true intentions, he told me he wasn't prompted to stop for me because he was "tired" and didn't feel like being bothered with my bullsh-t. Oh yeah, buddy?

More from The Stir: Bernie Sanders Supporters' Pick-Up Lines Are Too Hot for Tinder to Handle

3. "Smile, beautiful" is the lowest offense.
Some women hate this because, well, the thought that some man had the audacity to assume nothing sh-tty happened in their day ... ugh. I, however, don't always mind this, but understand why other women frown upon it (no pun intended). I used this line when in doubt, as it's the universal catcall, tried and true, known to piss many women off daily. I hit the ground running, begging men to put a smile on. I blurted out "Smile, baby," "Smile, beautiful," and "Smile, sexy" to unsuspecting men and only got more obnoxious when they wouldn't pay me any attention. "So you're going to act like you didn't hear me?" I questioned, and some of these guys had the nerve to ignore me, damn it.

However, many men shared my thoughts and actually rejoiced in someone caring enough to notice. In fact, it admittedly brought smiles to quite a few of their faces. I had one guy tell me he's not used to people telling him to smile and it actually made him and his friend happy.

4. Generally speaking, they're uncomfortable.
I constantly get approached by men who swear my "boyfriend" won't be a problem or isn't his problem. So, of course, I took full advantage when a guy who was cuddled in a quiet corner, whispering low into his phone, caught my eye. He appeared to be on the phone with a lady friend, and even if he wasn't, so what? I made my advance, yelling, "Hey sexy, why are you on the phone with her when you can be over here with me?" First of all, let me say this was the hardest one to keep a straight face through -- the guy, clearly uncomfortable, became squeamish, whispering what sounded like a desperate call for help and embarrassment. Astonished by my approach, he ratted on me -- informing the lady on the line, "These girls just tried to pick me up."

I can't help but wonder how men think I feel when being followed down the street, prompted with "Aye, sexy" while I'm talking to my mother (who could just as easily be my boyfriend) on the phone -- the world may never know. However, we do know they're totally uncomfortable with being violated while they're on the phone.

To these men, I've got some pretty solid (yet, elementary) advice: Don't dish it if you can't take.

More from The Stir: Runner Has TV Camera Crew Follow Her to Humiliate Creeps Who Catcall Her on the Street

5. *Bonus*
While this has nothing to do with my results, it's a very serious note worth mentioning -- for your information, you know? So here it goes: Men who catcall have smaller balls. So, in a way, they can't help it -- it's like the testicular equivalent of a Napoleon complex.

But, out of curiosity, do I somehow get credited for having bigger balls for catcalling men?

Kiarra Sylvester is a staff writer for The Stir.