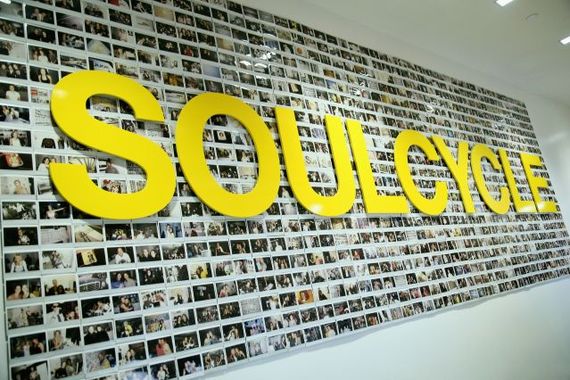 I had never heard of SoulCycle prior to moving to New York, and was always a little confused as to what it was selling. Was it selling bicycles? Was it selling souls? Was it a gym? Was it all three? It wasn't until a close friend of mine, and lover of cycling classes in general, told me that it is in fact a cycling studio.

But so much more than just any cycling class, they emphasized.

The next time I would hear about SoulCycle was when it was lampooned in the Netflix series "Unbreakable Kimmi Schmidt." The show calls it "Spirit Cycle" and makes the whole organization seem like a cult.

As one who's alway game to join a cult, I decided that I should give SoulCycle a spin.

I scheduled my class for after work and arrived all dressed up in my best workout gear, which, as I learned upon entering the building, was actually the worst. People were serious about SoulCycle and came dressed in SoulCycle gear and other legitimate-looking garb. My mismatched and ill-fitted shorts and tank top made me look out of place and very much a virgin to cycling.

Much like a bowling alley, SoulCycle provides you with a pair of uncomfortable shoes to walk around in. These cycling shoes have little metal tips under your toes, so you feel a little bit like Shirley Temple tapping around the building (or at least I did).

I tapped my way into the dark room, and noted the candles and a general sense of excitement from my classmates. Cycling friends clicked over to one another and said hello before heading to their bike and getting to work, snapping and click-ing their bikes to fit their bodies.

Since I was a virgin, a SoulCycle employee came to help me out. Just like the last time I lost my virginity, I could barely see or understand them, and all I could hear was "you're a natural," and "No, it won't hurt."

And just like the last time I lost my virginity, all of that was a lie.

Before I jump right into describing the actual trial by fire that was the spin class, I should preface that I consider myself to be in decent shape. I'm not an athlete by any means, but I didn't think that SoulCycle would be that hard for me.

But since this is "honest journalism," I guess I should admit that SoulCyle slaughtered me. If I was a village, SoulCycle was a viking army that pillaged and razed me to the ground. I wish I could put SoulCycle before a war tribunal for the atrocities they committed on my body.

Back to the class: The session began with some really loud club banger music. I'm talking gay club, high as a kite, call-in-a-noise-complaint loud. Our instructor told us to start pedaling, which I did in earnest for about two minutes before realizing how both out of shape and royally screwed I was.

About 15 minutes into the class I started to get desperate. I felt a little nauseous and thought that maybe if I vomited I could use that to escape from the class. I have only vomited once in my entire life, so this was pure desperation. I tried and I tried to vomit but all I got was the urge to dry heave.

Then the instructor told us to grab our weights. I perked up a bit when I heard this. I'm in no way a muscle man (heck, I'm barely a skin and bones man), but weights were something I imagined I could do. Especially with the beans they were calling weights. They can't have been more than 5 pounds each. I've eaten burritos and sandwiches that were heavier than these. "You got this man, you got this," I thought to myself

After the weights, the instructor let us rest for what felt like a third of a millisecond, before starting us up on what I would eventually refer to as "the stampede."

The instructor had the entire class essentially throw their bodies back and forth, up and down, and all the while cycling. It was ridiculously exhausting, and it made us all look and feel like wildebeest.

About half-way through I gave up even trying, feeling like a freshly trampled Mufasa.

The class finally came to an end and I unclipped myself off the bike and stumbled like a baby giraffe out into the hall where I voraciously chugged my water. Everything was pain: My legs were on fire, my butt was decimated and my soul was crushed. "Is this hell?" I thought.

Everyone else, however, looked like a fresh blossomed tulip in Central freaking Park. I looked back at the room slowly emptying out and winced. "Oh God," I thought. "I am so out of shape."

To be fair, I can see why people love spin classes and why SoulCycle is popular. It's motivating and the instructors make an effort to keep the mood upbeat and inspirational. When speaking with my cycling friend after the class, they explained that what they liked most about SoulCycle was the pack mentality when you're in a class. You're not competing with other classmates -- you're all working together.

It's likely that had I any dedication and fitness ethic I would try SoulCycle again and again, til I grew numb to the pain. Maybe I could get used to the endless pedaling and the silliness of throwing my body around on a stationary bike.

But as I sat in a daze on the subway, my body and I realized that we didn't see any more cycling classes in the future. That was the end of the road for us.

I guess you could say my Soul wasn't in it.