Maybe it sounds obvious, but if you have the option to choose between eating food or not eating food, you should always choose to eat food.

As a person who regularly dreams in her sleep about what to eat for breakfast and records episodes of Food Network shows, I never considered cutting my visceral relationship with food. Then I found out about Soylent.

You might've heard about it too, as the folks over at VICE, The Verge, The Atlantic, The New York Times and BuzzFeed tried it and talked about it. But if you haven't, Soylent is a liquid meal that its founder, Silicon Valley's Rob Rhinehart, says has a day's nutrition for the average adult and keeps stomachs feeling full. Each serving of Soylent is around three dollars to boot, a major step down from the average of eight dollars I usually spend on meals out.

I was intrigued. Yes, internally, my solid food-loving gut was screaming at me to click out of Soylent's website and to drag my eyes away from the articles chronicling many a brave individuals' extended experiences with the drink. But I couldn't. My curiosity was snagged on Soylent like putty tangled in hair. Soylent seemed too novel to pass up, and so I ordered a week's worth of it, intent on following a 30-day Soylent and water regimen. I wanted to see if the hype surrounding Rhinehart's invention lived up to its name. 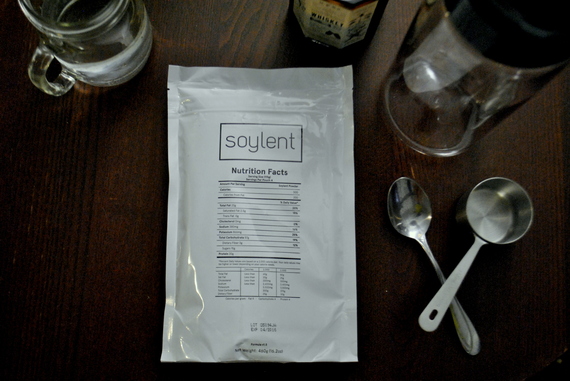 It arrived in a surprisingly short amount of time from a facility in Pennsylvania. From the box, I lifted out seven white bags of Soylent powder, a mixing pitcher, and a stainless steel measuring scoop. I felt optimistic that I could stick to my plan. It didn't seem so bad, I thought, as I opened a bag and sniffed the beige contents. It smelled vaguely like peanuts.

I wasn't wrong about the peanuts. As I took my first sip of Soylent a few days later, it tasted, as I scrawled in my notebook to track my daily progress, "like sad peanut butter." I began to doubt my decision from day one, and a knot of anxiety furled in my stomach. 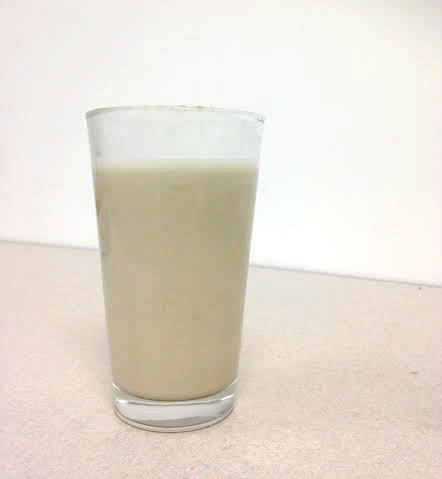 
Here's the part where you can all laugh, or scoff: I cracked after a day and a half.

It wasn't that I felt physically sick. In fact, I felt that I was a little more sprightly, and my focus was as rigid as it'd ever been.

Mentally, I was bludgeoned with thoughts that distracted me all day despite my best attempts to resist them. I grappled with dreams of Sicilian pizza graced with extra red pepper flakes; Chipotle marinated with a generous scoop of their spiciest salsa; taro bubble tea infused with extra herb jelly, and pasta blessed with a handful of shredded parmesan. Not even 24 hours had passed, and I was thinking of giving up.

My emotions were roiled. I was alarmed by my apparent lack of self discipline manifesting itself so quickly into my dietary change -- I wanted solid food deeply. But I was determined to stick to seeing out the 30 days of Soylent, so I mechanically downed my liquid dinner. Yet on the inside, I was Leonardo DiCaprio at the Oscars last year. More concisely, I was the meme that escalated out of Leonardo DiCaprio at the 2014 Oscars: I was screaming internally.

On the second day, I watched my coworkers chat and fill up on sandwiches at lunch. I passed the aromatic scents of Indian food wafting from under doors in my apartment building around dinnertime. My resolve to stay on Soylent weakened a little more, and then it snapped entirely.

Yes, Soylent satiated my stomach. But it didn't satisfy the same way a home-cooked meal -- or even Seamless takeout -- would, because Soylent is the equivalent of eating a frozen Thanksgiving dinner alone in a warehouse instead of eating a holiday spread with your loved ones.

There's an inimitable thrill in eating and preparing different food. There's enjoyment in feeling the leftover tingle of spiciness on your lips after a good meal, or feeling the steam from a freshly-prepared dish waft into your face. There's a warmth about pooling dishes together for a potluck, or about the few seconds of quiet chewing from everyone around a table before peppering the chef with compliments.

And that's what ran through my mind as I decided to prematurely end my Soylent experiment and book it to my neighborhood Thai restaurant.

The first bite of the extra spicy chicken Pad Thai was euphoric. My eyes rolled back in my head. I saw stars. I reveled in the mild burning of the inside of my mouth. My Soylent-filled stomach grumbled indignantly from the sudden switch from liquid to solid food.

Despite my joyful reunion with solid food, I wish I could have stuck to Soylent longer than a day and a half. My failed stint made me question my will power more times than store bells chimed on my busy street, although it did affirm the affectionate bond I have with a fresh acai bowl.

But if anyone's up for beating my Soylent record, I'd be happy to give away my supply -- I've got plenty.

More:
healthy livingsoylent
Newsletter Sign Up
The essential guide to taking care of your mind and body
Subscribe to HuffPost’s wellness email
Successfully Subscribed!
Wellness delivered to your inbox