Superglue is a sticky subject in my household. Four days ago, when I was cobbling together forgotten ingredients for a makeshift tofu scramble, I sliced my finger, along with the tomato, and was advised by a doctor-friend to superglue-shut the wound. (Apparently, this method worked well for hurt soldiers during World War II.) I heeded his instructions, and my cut was instantly on the mend, causing no more pain. Super.

But, as I've learned in the past few days, even magical superglue isn't always meant to mend. Some broken parts have cracks that run deep. This I know now.

Today would have been Grandma's 91st birthday. She was supposed to have nine more years -- she was supposed to live to be 100. That's what I always had planned for. But she died at 89, fighting her way to the grave, relentlessly arguing with the unforgiving bright white light that took her away from me. 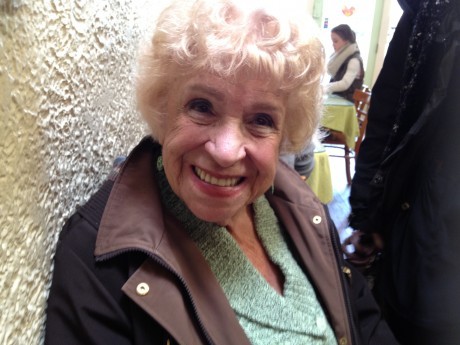 This morning started the same as any other day, with mumbles and morning coffee. With fast-paced cartoons masking the looming anxiety about the work-heavy day ahead.

At 10:20 a.m., two men from Ikea delivered my wife's and my sofa chairs, leaving enormous boxes in the middle of our living room. I stared at the boxes, noting that "this side up" was upside-down. "Now what?" I said to my determined wife, who insisted that we can put these together ourselves, that paying someone to do it would be pathetic, that we were more than capable of doing it.

I thought of the exploited workers who built these chairs, and I felt instant guilt. Even though the vast majority of our belongings are from the Goodwill or found on the street, sometimes -- even for the best-intentioned among us -- Ikea happens.

My wife was right. We could indeed put these chairs together on our own, even if only nine of my fingers were up for the job -- the other one still bandaged from the tomato debacle. So I grabbed the hard-core scissors from the messy kitchen drawer and started the first Herculean task: opening the overly packaged boxes. My wife, with the second pair of (somewhat dulled) scissors, did the same.

Today is Grandma's birthday. We should have Chinese food to commemorate it. She always loved scallion pancakes. Let's find some vegan ones and call it a day. Maybe listen to some Frank. Maybe wear bright green.

Goddamn Ikea. Even opening boxes is a project, and somehow one of the boxes slipped from our control, tumbling -- along with my wife -- backwards, directly into the curio cabinet that held the one item I inherited from Grandma that I tried my best to protect... during our moves, during thunderstorms, during anything that would shake the house or shake my heart: Grandma's Lladros. Her small, beloved mini-statues of shiny porcelain people doing things Grandma loved. Mothering. Teaching. Talking on the phone.

During my childhood -- and my mother's, too -- these Lladros sat atop various curio cabinets with the pride of a purple heart. They were precious. They were Grandma's. They were from Fortunoff.

And though these little porcelain people are pretty much the opposite of what usually calls to my aesthetic, they were a piece of grandma's history, and -- perhaps somewhat irrationally, since they were just things -- they meant something to me. Something deep.

This morning, in a cliché kind of slow motion, I watched as they tumbled, then fell, then broke -- the small porcelain head of the mama statue sitting on the floor five feet from her body. A miniature site of a disaster movie.

My wife and my voices became higher pitched, a cacophony of shrieks, expletives, and emotions. "The Lladros!" "My grandma!" "I'm sorry!" "Oh, God!"

I ran to my bedroom like a frightened 16-year-old -- the 20 years I have on that mystical brooding child melting away. Suddenly my wounded finger began to throb, and I momentarily wondered if the superglue from my finger had dissolved into me.

And then I remembered: "Superglue!" I exclaimed, after I cried away my trademark eyeliner, leaving my face swollen and unrecognizable, along with the weight of my sudden emotional outburst.

Not missing a beat, my concerned wife (who was not hurt from the tumble) ran to the store, even though she was still in her pajamas, to get superglue. That will fix the Lladros. That will soothe the soul.

But still, even though I was well aware that it was only a matter of minutes before my wife would return with the glue -- along with some emergency caffeine which I requested via text -- I nonetheless began to unravel. 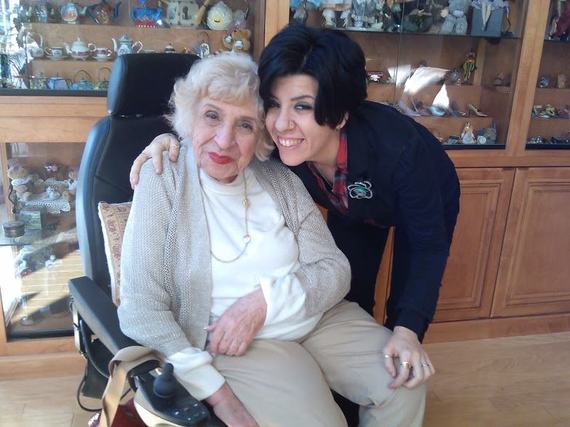 Lladros are just things. Silly items. They aren't particularly expensive, nor are they especially attractive (shhhh). So why am I so attached to them? Generally speaking, I pride myself on not being overly attached to physical items. I am a thrift store girl. I am an environmentalist. I am practical.

I am crying. I am unable to stop.

It's the superglue, I realize with a jolt, that's breaking me. Not the drops holding my finger together, nor the unopened container in my wife's basket at the grocery store that will mend the Lladros back together. Rather, it's the glue that I dabbed onto my heart when Grandma died a year and a half ago that's coming undone. It's the globs of it I have reapplied since then whenever the cracks reappeared, that never dried. Maybe superglue can fix broken statues. Maybe it can even heal cut fingers. But it took me until today to understand that there are indeed some cracks that can't be filled with calk.

Today is my grandmother's 91st birthday. The world is better because she existed, that I am sure of. Her Lladros are in the living room as I type this; the superglue is now drying, and the damage was minimal, all clean breaks. If you ever come over and you see them sitting there, and I tell you, "those were my grandma's," you will smile -- probably thinking of your own sweet grandma. You won't even notice the faint lines where they were repaired.

Perhaps in time I won't see them either. The cracks will disappear, and my emotion around this morning's catastrophe -- brought to you by Ikea, or by my own negligence -- will certainly fade. The superglue will work masterfully. Best two bucks I've spent in a long time.

But the pieces inside of me that I mistakenly tried to fix with a cheap sealant will remain gaping holes. And perhaps that's the point. Instead of filling them with glue -- or booze, or lies, or chocolate -- I will fill them with life, as Grandma would have done.