At 52, I'm deeply aware of my character flaws. The upside is that by now I've learned to turn them into assets and make them work in my favor. I've been labeled a prolific writer, an effective and productive editor, a fast and reliable translator, a successful entrepreneur, a multitasker, a supermom and an overachiever. While I like to think of myself as such, I confess: I am none of those things.

Do I accomplish a lot? Yes. But, not because I am disciplined, organized or efficient.

I pull it all off because I am, in fact, an addict. That is my secret. Well, not really a secret because I've written blogs, articles and books about my flaws. But of course most of my clients, former employers and colleagues have not read those books. So, to them, I'm just someone who gets things done. In truth, I am compulsive, obsessive and neurotic, but I've learned to stop fighting it and make it work for me. 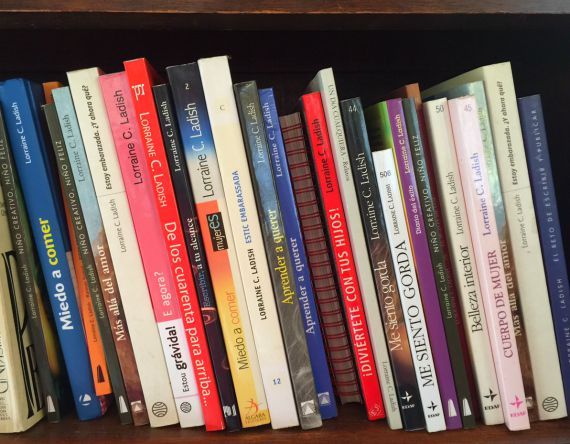 © Lorraine C. Ladish - Some of the books I´ve authored in different languages

I was a straight-A student as a kid. I would even get sick with a fever from studying too much and wanting to excel academically. Then, perhaps driven by that perfectionism, at the age of 16 I contracted an eating disorder. I swung from bulimia to anorexia -- peppered with clinical depression -- for many years, and my grades suffered as a result.

As I grew up, to the outside world, I appeared to be a happy fitness instructor (which I undertook in an effort to control my weight), and then a successful translator and interpreter. I felt like a fake, because in private, I could not control my impulses and I knew that was robbing me of the chance to achieve my real career goals. I wanted to be a published author, and make a living writing.

As I struggled to overcome my illness by going to therapy, reading books, and eventually attending a 12-step recovery group, I had a revelation. Recovering addicts, alcoholics, gamblers, and yes, bulimics, all had something in common. They all went on to become successful in life.

How and why? Because they (we, really) learned to channel their addictive (read compulsive and obsessive) personality. Once the addiction is out of the way, we are left with a lot of time and mental, emotional and physical energy. If instead of obsessing about and using drugs, food, exercise, gambling or any other substance or behavior you obsess about writing, getting a college degree or establishing your own business, just imagine the possibilities!

I eventually wrote about my struggle with bulimia and compulsion in my first book titled I Feel Fat, originally published 22 years ago. That's how my addictive personality landed me my first book deal.

I may have recovered from my eating disorder, but I am still neurotic. I have, over the years, learned to use this to my advantage. I have no problem focusing on work. I am task-oriented and self-driven. In fact, once I get started on something I'm a machine. My site Viva Fifty! is a result of that.

The problem comes when I have to shift my focus outside of writing, editing and now social media ... I need to force myself to take breaks, to go running (another result of my addictive personality -- I've been hooked on the endorphin high of long-distance running since I was 12), or hang out with my significant other or my kiddos.

However, I believe that being an overachiever beats being addicted to drugs, alcohol, gambling, or having a full-blown eating disorder. It takes acute awareness of one's flaws to be able to put them to good use. But once you've pinpointed them, I assure you, you can ride them like a wave to the shore of opportunity.

How do you take advantage of your flaws?