As you can tell by the title, this post is about gay drag queen Hurricane Kimchi and Seoul. Gay, drag queen, Hurricane Kimchi, Seoul -- these are words that describe me. I am gay, and at times I am a drag queen who goes by the name Hurricane Kimchi. I was born and raised in Seoul. I assume you know that Seoul is Korea's capital, but I will tell you a bit more about the city.

I am a man that likes men, therefore referred to as gay. The concept of drag exists within gay culture -- but it is still quite strange and new in Korea. To describe it in the easiest way, an example of a drag queen is the male lead dressed up as a woman in the movie Hedwig and the Angry Inch. Gay men usually dress up as women for performances, but drag queen culture involves more than just dress up; drag queens apply exaggerated makeup, add their own extravagant style to express their individuality, and create their own characters. There are countless types of drag queens, such as effeminate drag queens, masculine drag queens with mustaches, and quirky drag queens in Lady Gaga-like costumes. The categories and styles of drag queens are endless. 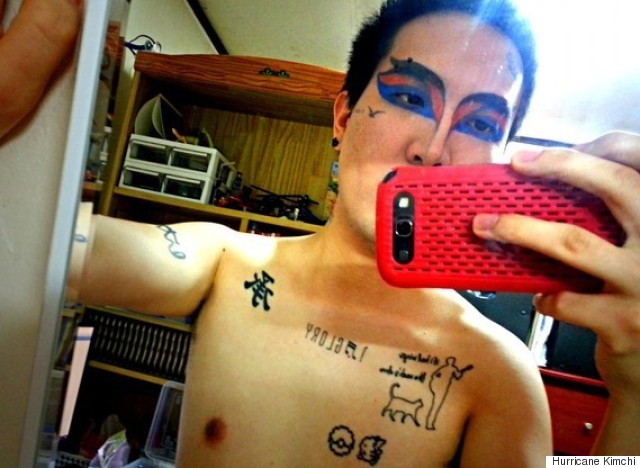 A selfie during my transformation into Hurricane Kimchi.

In Korea, people say that it is impossible to live confidently and happily after coming out as a sexual minority. However, as I was raised by a father who was an artist and a mother who was quite progressive, I was always accepted, supported, and loved for who I am, including my sexual orientation. Of course, the process of accepting and loving myself as a sexual minority amidst Korean culture and informing my family about this fact was extremely difficult, but I got there, and I'm doing well.

Even though it takes three hours to put my makeup on, and wandering downtown in heels hurts my feet, I was determined to continue for a whole week, with beauty and dignity.

Yet I know how lucky I was. There are many people around me who participate in activities or rallies for human rights and sexual minorities. So naturally I have seen sexual minorities with various experiences, and I have heard a lot of stories. Based on my experience, in today's Korean society, the majority of sexual minorities are unable to live happy, dignified lives. Nor are they able to come out -- they live the majority of their lives hiding their true selves. I've even seen some people take their own lives. There are also many young people out there who are forced to wander between homeless shelters and their friends' homes after telling their family about their sexual orientation (or after being outed).

I asked myself several questions. Is there anything I can do for these people? Of course I make donations to provide financial help. Yet looking at the big picture, wouldn't bringing about change in society be the most positive solution? A few days after I asked myself these questions, I threw myself into the middle of Seoul. And I did it in high heels. 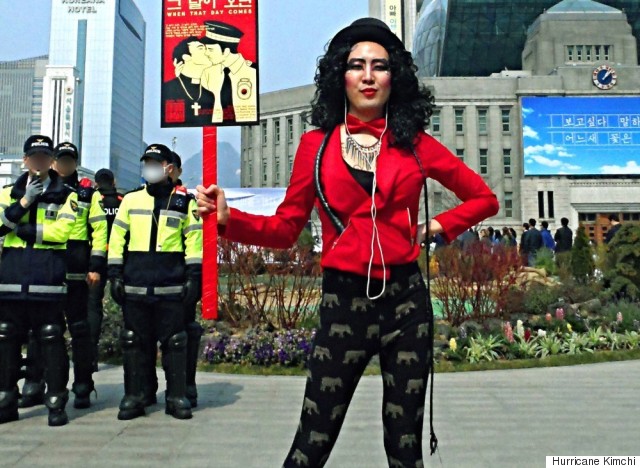 Day one of stepping into Seoul wearing high heels. In front of Seoul City Hall Plaza.

I donned my Hurricane Kimchi style -- high heels, makeup, wig -- and decided to roam the streets of Seoul. Some people would call this a street performance (I'll refer to this as a performance from now on), and others would call it a one-man protest. Whatever you want to call it, there are two things I am trying to achieve. First, I want to prove that sexual minorities exist in Korea, that they can exist anywhere, and finally, that they have the right to a dignified existence. Second, I wanted to let other sexual minorities know -- the frustrated and lonely people who are hiding their sexual orientation -- that they are not alone; that there are others fighting for the advancement of rights for sexual minorities.

I didn't want to appear on the streets of Seoul as Hurricane Kimchi for one day and give up. Nor did I want to be satisfied and say that 'I've done all I can.' Even though it takes three hours to put my makeup on, and wandering downtown in heels hurts my feet, I was determined to continue for a whole week, with beauty and dignity.

This is what I did for a week:

--Thursday, March 31: Chongsin University (There was an anti-LGBT event in the University assembly hall on the same.)

--Saturday, April 2: Party at a club in Hongdae for drag queens and sexual minorities (The Meat Market Seoul) 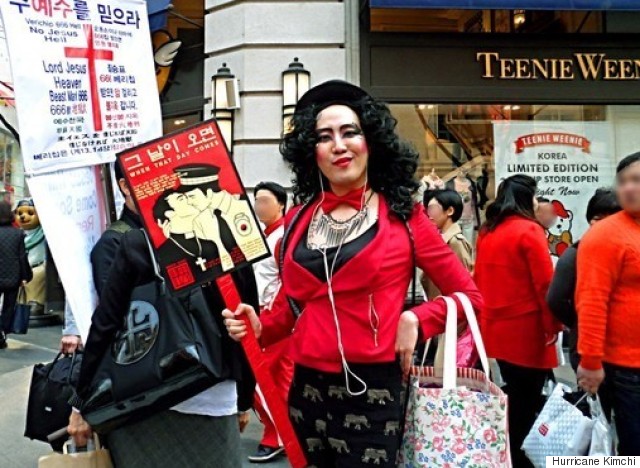 At Myungdong, a popular shopping destination. 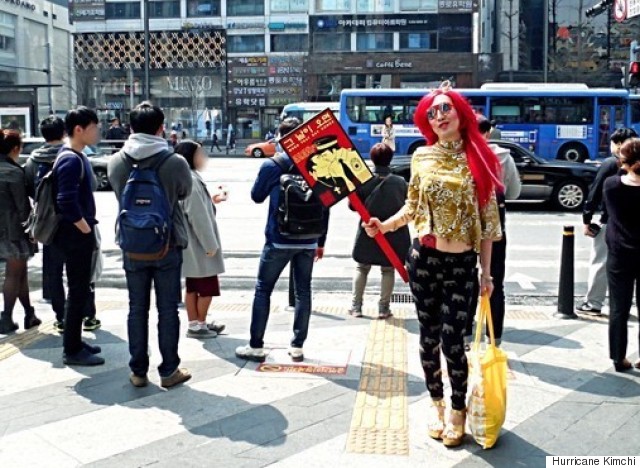 At Gangnam, a neighborhood made popular by the singer Psy. 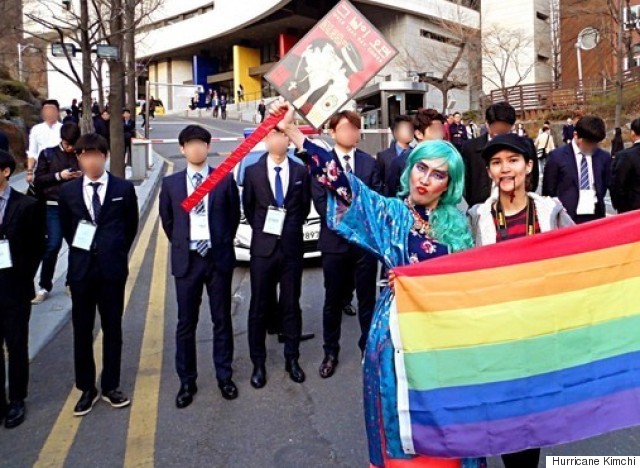 Blocking the entrance of Chongsin Unversity where an anti-LGBT concert was being held.

I mainly carried out my performances in locations that are either highly populated or hold deep meaning. The performances went on for a total of six days. For four of these days, I wandered through downtown on my own. The performances had to take place during the day, not only because it's easier to see in the daylight, but also because if you hold a performance during lunchtime, many workers would see it on their way out for lunch. Because I did these performances during the day, most of my acquaintances who have jobs or are still in school found it difficult to join me.

However, on March 31, my performance was held fairly late in the afternoon, so I was able meet many acquaintances and human rights activists. On that day, there was an anti-LGBT concert at Chongsin University, which is a Christian University. The controversy had started when the ads for the concert appeared online, portraying being gay as a sin and the cause of AIDS. Many people gathered outside the university to complain about this representation. Among these people, there was my friend and human rights activist Edhi Park, church pastors (there are many churches out there that embrace sexual minorities), and many other people who had been passing by. After a long interruption due to a quarrel with the police, we decided that we would express our opposition to Chongsin University outside the main entrance rather than inside school grounds.

Crime rates are low in Korea, and hate crimes against sexual minorities do not occur often in the streets. As a result, I was able to walk the streets of Seoul dressed in drag. Even so, I felt more confident and safe on the days when I was surrounded by like-minded people. I, Hurricane Kimchi, was not the only one who felt this way. Countless drag queens and sexual minorities did so as well, enjoying performances, music, and dancing together at the Meat Market party. 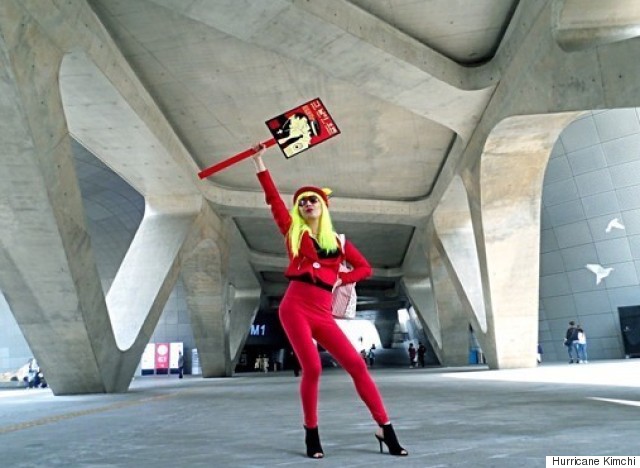 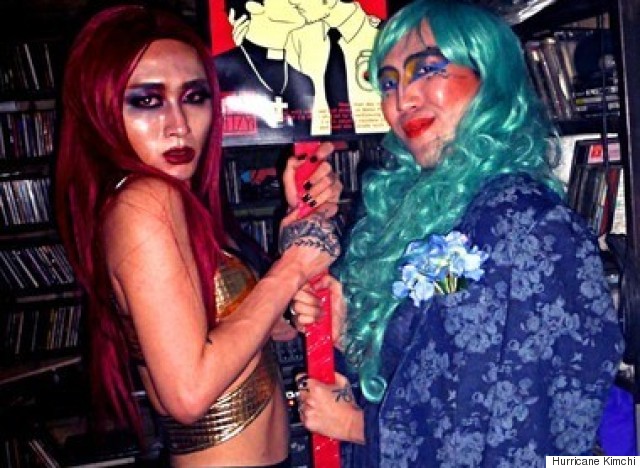 Hurricane Kimchi with Kuciia Diamant, sponsor of the Meat Market party and a performer at last year's Queer Culture Festival. 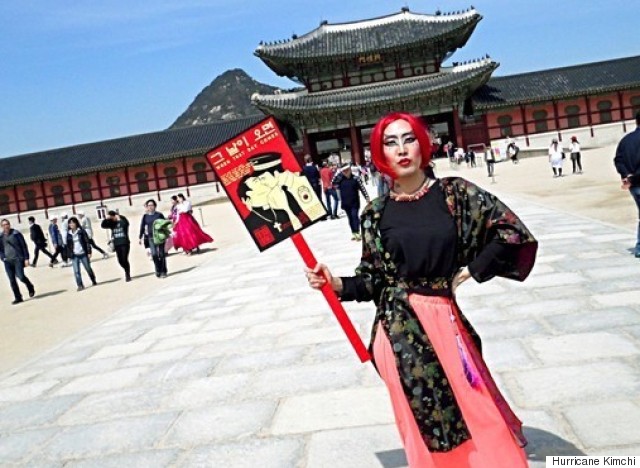 As the several-day performance was ending, I was physically exhausted, after wearing "killer heels," makeup that took three hours to apply, and being constantly on the move. I was also mentally exhausted from dealing with security guards, the police, and other opposing forces. If I had asked myself: "Why did I put myself through this?" then I definitely would have been disappointed. However, my conclusion was: "Even though it was hard, I spent a very rewarding time full of meaningful lessons."

The media often points out that many Asian countries are still very conservative, and that when it comes to LGBT issues, Korea is very far behind. Furthermore, both Koreans themselves and foreigners often claim the following: Legalization of gay marriage, which is already in place in many European countries and the U.S., will take dozens of years in Korea.

If I had stayed home or only went out to gay clubs, I would never have known that there were so many people, young and old, who are open and ready to support sexual minorities.

However, the Korea that I saw with my own eyes was very different. Even though I was already aware that young people have a more open mind and can accept the problems of sexual minorities, it was hard to predict how people from older generations would react. However, now I somewhat know. There were many people who helped to change my bias against the older generation, including: The lady who accepted my request for a photo and gave me a smile, the man who told me that I was cool and that I should cheer up when a religious person passing by pointed and cursed at me, and the grandfather who gave me a thumbs up as he passed by. If I had stayed home or only went out to gay clubs, I would never have known that there were so many people, young and old, who are open and ready to support sexual minorities.

As much as I've learned through this experience, I sincerely hope that this it brings even a little bit of positive change to others, in whatever way possible, whether it be people in Korea or in some other part of the world. I hope that people would talk about Hurricane Kimchi with their families and friends.

Many sexual minorities in Korea claim that Korea is too conservative when it comes to issues with sexual minorities. I want to live in Canada, the U.S. or another foreign country, they say. I want to ask those people if they know how hard people fought and how much blood was shed in order to secure the rights and freedom of sexual minorities in those countries. I definitely can't, and don't want to demand that people stay in Korea, fight, and shed blood. However, I do wish to say this: Through my performances, and through sharing what I experienced in those performances, our country is changing, and at this very moment, there are so many people working hard to bring about more positive change.

During the performance period, I uploaded selfies and short videos on Hurricane Kimchi's Facebook page in real time. I was surprised at the enormous amount of views and comments I received. I was so thankful for all the people that saw my photos and videos and sent me messages of gratitude and support through Facebook, email, text, and even in person. Even though I said I would be out there for a week, there was a point at which I wanted to give up. However, I could not give up because there were so many people watching. I was able to survive a whole week because of all the people that supported me and cheered me on!

I originally started my performance to spread love, and I received love back. I would like to thank everyone who was a part of my week's program.

You can see all of the videos and pictures taken during my performances on my website, or on Hurricane Kimchi's Facebook page.